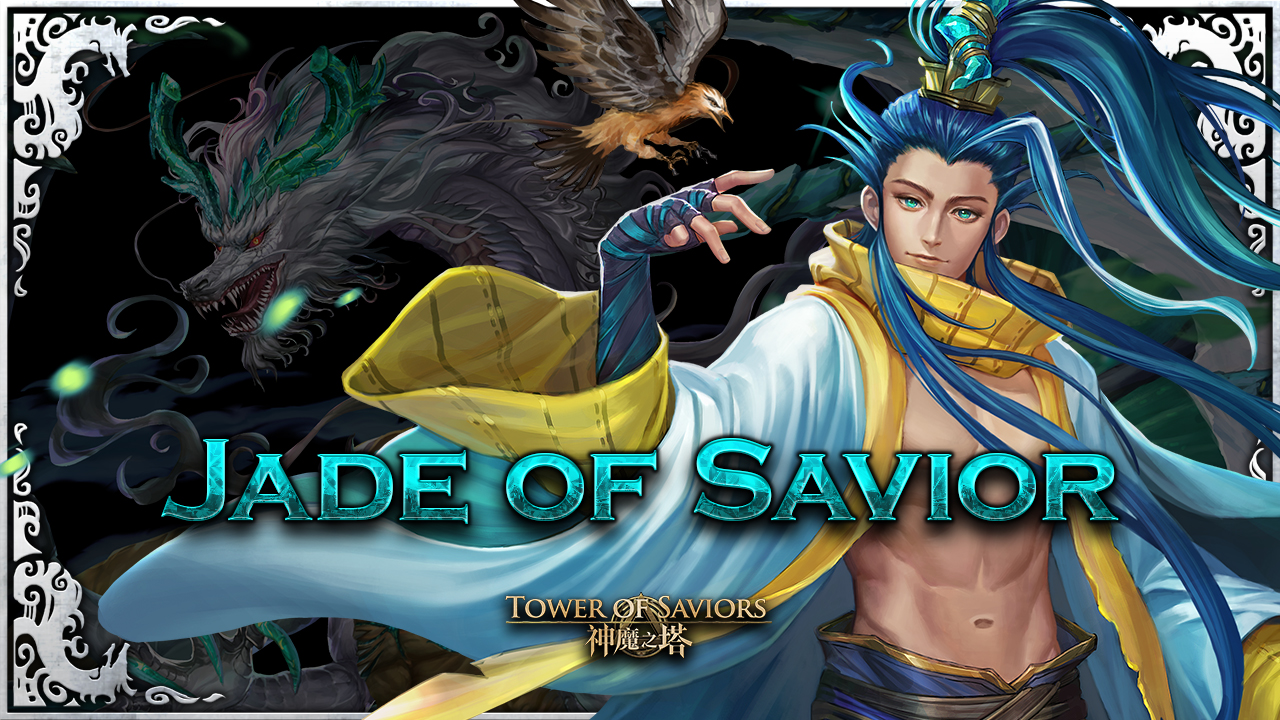 Going into the 5th week of version 18.0, “Jade of Prestige – Qing Gui”, Dragon black-gold character from “Relics of Fantasy”, will go into the realm at 4 pm next monday! At the same time, “Noble Fire of the Lost – Bahamut” will be included into the Diamond Seal “Jade of Prestige – Qing Gui”! Besides, “Metal Fanatic – Michelle” will bring you a brand new mission “Destructive Band”!

During the event period, Ancient Coin Seal will open for 7 days. This time,  “Jade of Prestige – Qing Gui”, “Noble Fire of the Lost – Bahamut” & “Primal Deities” will be added! 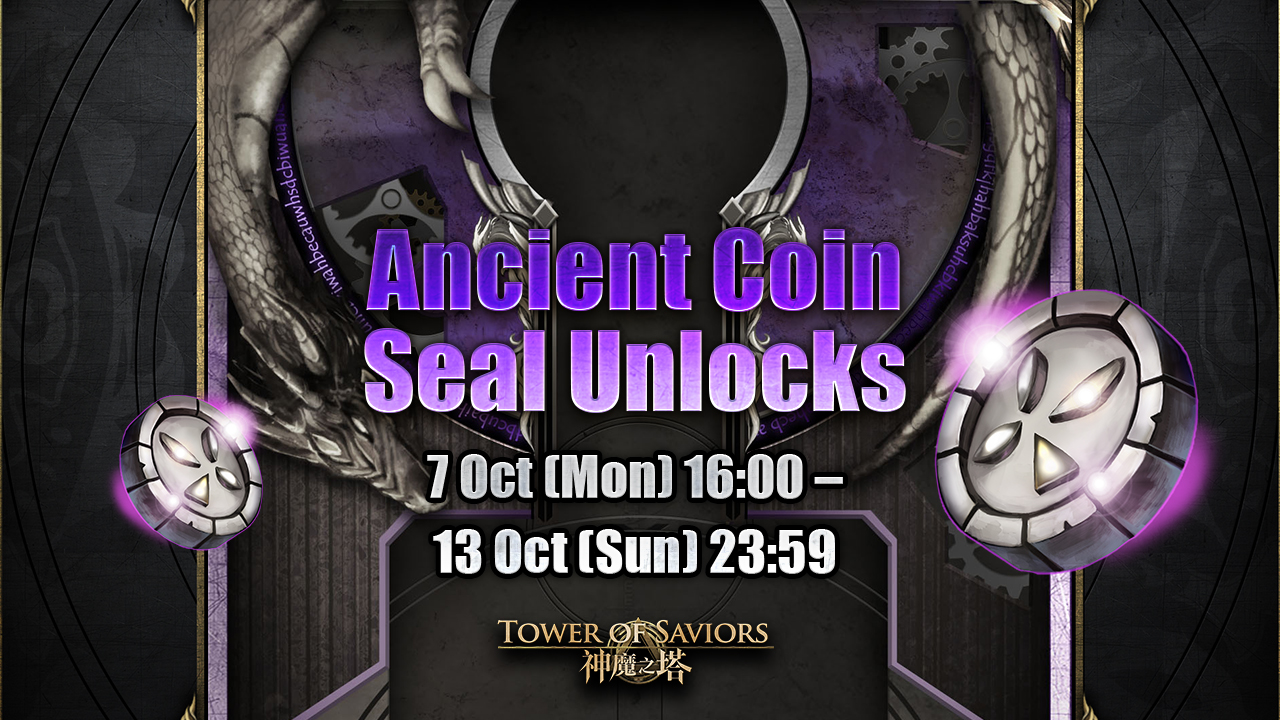 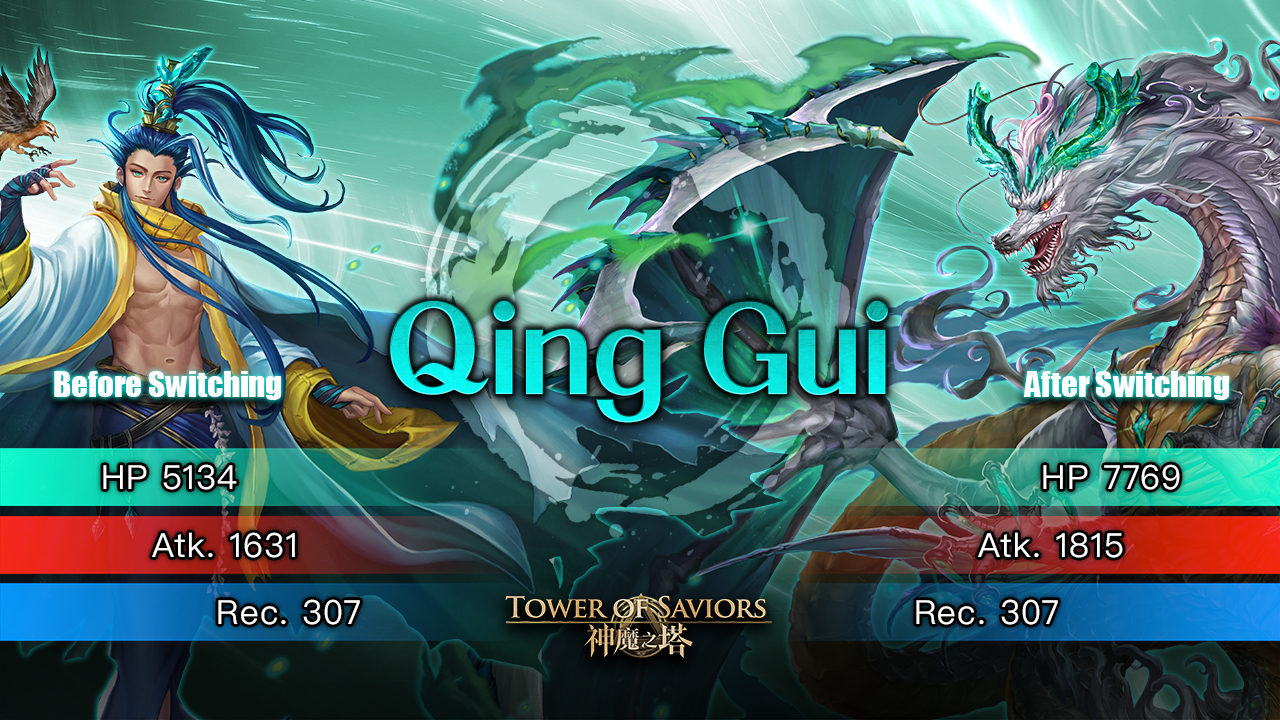 After Switching, “Qing Gui” will have full 12 EP!

When dissolving 3 or more Earth Runestones in 1 Round, 1 EP will be stored!

Earth Dragon “Jade of Prestige – Qing Gui” is the only switchable black-gold character for now! After Switching, Qing Gui’s HP & Attack will be greatly boosted.

Before Switching, “Jade of Prestige – Qing Gui” has the leader skill “Jade of Superiority”:

You can be blessed with multiple team skill effects when using “Qing Gui” as Leader & Ally. With Dragon’s CDs becoming 0 after entering a stage, Summoner can switch “Qing Gui” into “Howl of Rune Dragon – Qing Gui” when the battle starts!

“Jade of Prestige – Qing Gui” can activate “Allure of the Jade” upon 5 CD:

I. By tapping a Runestone on the Magic Circle of Elements, Runestones of that type will be turned into Enchanted Dragon Runestones.
II. Turn all enemies’ into that Attribute for 5 Rounds.
III. The Monster’s Attack x 5 for 1 Round.

When switching into “Howl of Rune Dragon – Qing Gui”, it will turn all Runestones into Dragon Runestones! After switching, HP & Attack of “Qing Gui” will be greatly boosted; its leader skill will be changed into “Jade of Supremacy”!

After Switching, “Qing Gui” has the leader skill “Jade of Supremacy”:

I. Dragon Attack x 6. When the Team consists of only Dragons:
II. Water, Earth and Dark Runestones also possess 50% effect of all Attributive Runestones.
III. For Combos made in the first batch of Runestones dissolved: Combos will be added to the next Round. Runestones of the same number will be turned into Enchanted Dragon Runestones in the next Round.

E.g. If you dissolve 7 combos this round (1st batch), next round will turn into 7 Enchanted Dragon Runestones and + 7 Combos!

EP Skill 1 of “Howl of Rune Dragon – Qing Gui will be the same as that before switching. For EP Skill 2 “Solidity of the Jade”, For 3 Rounds: I. Drop rate of Heart Runestones will be transferred to that of other Runestones. II. The Team will not be poisoned.\nIII. Earth and Dragon Attack x 2. 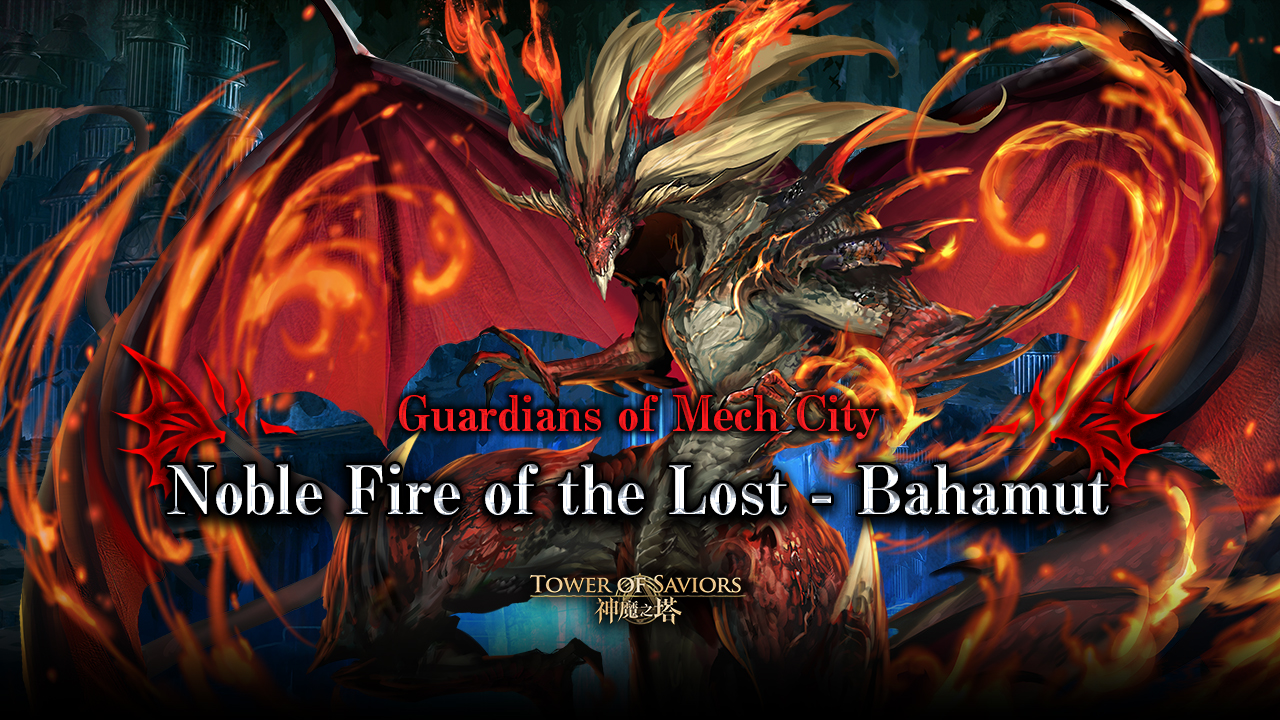 Bahamut is a good partner of dragon team!

Fire Dragon “Noble Fire of the Lost – Bahamut” can activate “Reverse of Dragon Scales” upon 6 CD:

I. Release the locked Skills of all Dragons. This Skill will not be locked. For 1 Round: II. Dragon Attack x 2.5. III. Damage received from Boss Skill “Burning” will be converted to HP. IV. By dissolving Dragon Runestones, Damage of Dragons will be dealt regardless of Combo Shield.

To keep on the music vibe in TOS, “Metal Fanatic – Michelle” will be setting up the Guild Mission “Destructive Band” on 7 Oct (Mon)! The stage is divided into 5 main areas. “Lofty Band”, “Demon Imbeciles”, “Adherents of Heresies”, “Missionaries” & “Imperial Soldiers” will be scattered in different areas.

In the guild mission, “Lambda the Benevolent Healer” & “Delta the Vow Protector”

will jump into the stage ! When encountering these characters, the clear score will increase to 200, and they are guaranteed to drop when you meet them.

As long as you accomplish 5 missions in each column, row or diagonal line, you can get some attractive goodies during the event period! Complete 12 missions and reach 200 score to get the golden title “Rockaholic” as a recognition. 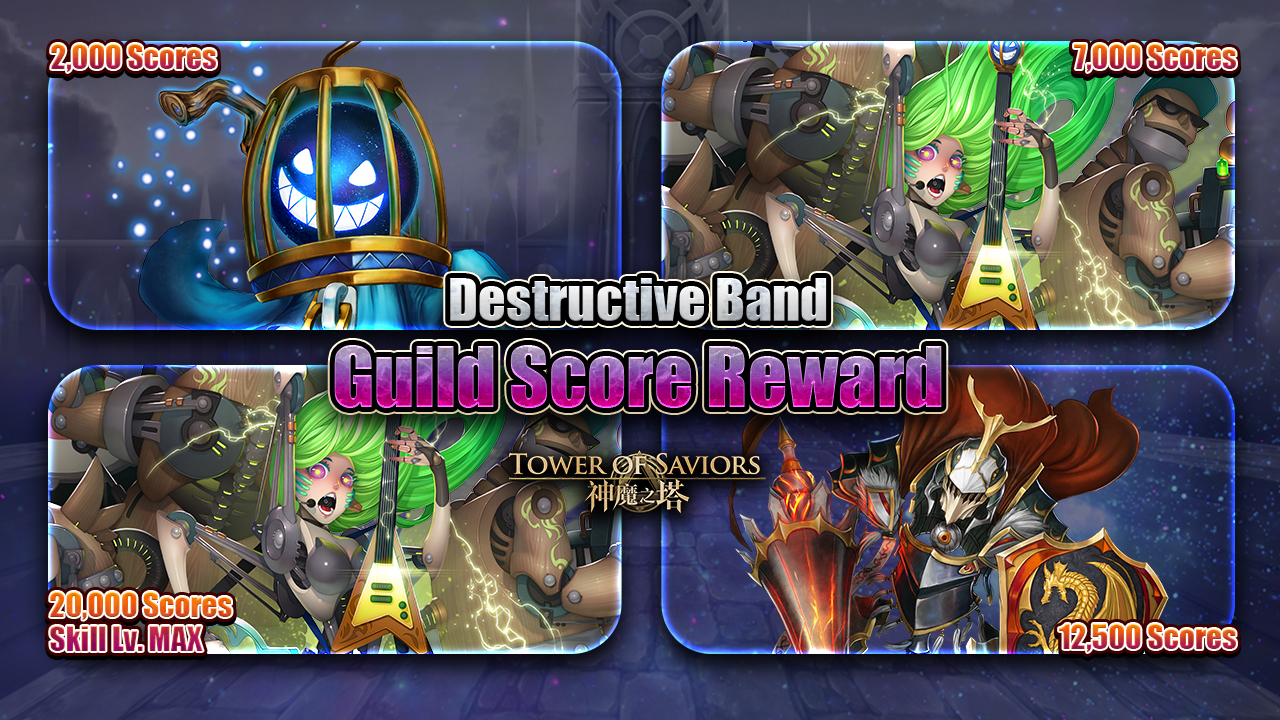 Team up with Guild Members to get abundant goodies! 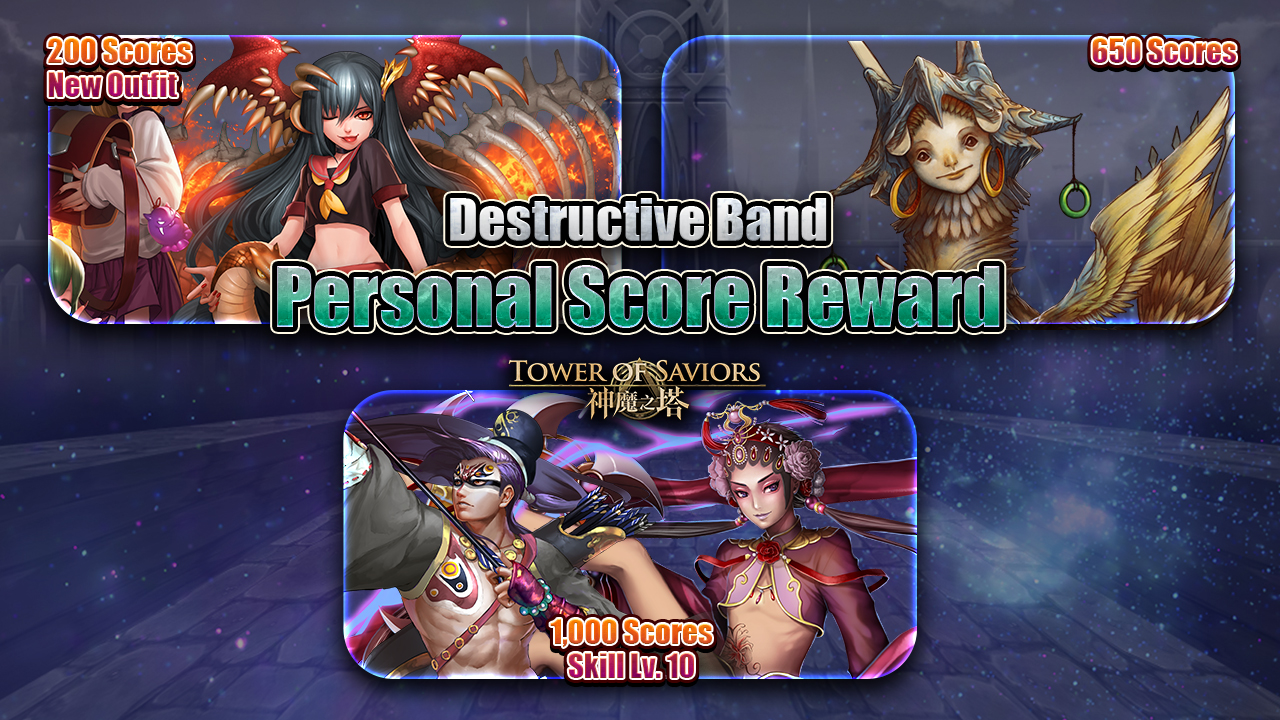 If the Skill is activated in a Wave of odd numbers, turn all Runestones into Light Runestones.

If the Skill is activated in a Wave of even numbers, turn all Runestones into Heart Runestones.