Stepping into the 4th week of the crossover event, “Mobile Fortress the Destroyer” will appear as a boss in the Joint Operation! Summoners will even face more challenges with the terror stage “Raging of Ancient God” before they get the PR form of Anu, and the 10th Seal “Eternal Prison” is going to unlock!

New Joint Operation “Breaking Magic Barrier” will be open for challenge on 22 Oct (Mon). “The End of Mobile Fortress” will have a face-off with all Summoners! You have to cooperate with guild members to take down this giant creature!

“Mobile Fortress the Destroyer” only receives Damage dealt by Fire attacks. Each Round before Summoner starts moving Runestones, all Water and Heart Runestones will be locked; Team Attack -20% for each Locked Runestone dissolved (triggering Dragonic Compulsion will be regarded as dissolving all present Locked Runestones). 25% of Summoner‘s HP will be deducted when the enemy attacks (regardless of all Damage-reducing and Willpower Skills); the more number of Damage the Summoner received, the more the enemy’s Attack will increase.

Complete the Joint Operation 15 Times (At least once for “Challenge” & “Extreme”) to get the animated outfit of Megumin!

* This image is for reference only 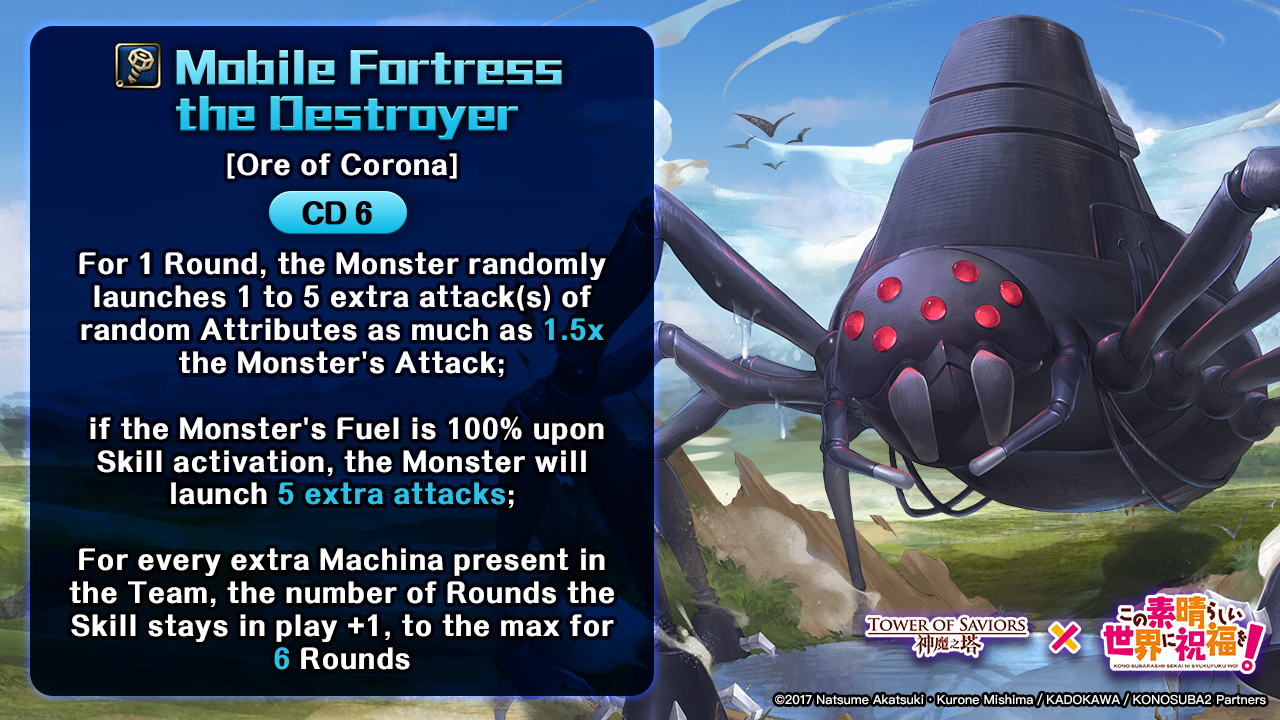 Water Machina “Mobile Fortress the Destroyer” can activate “Ore of Corona” upon 6 CD:

During the Joint Operation Event, Rare Craft “Glittering Downstream Opal” will be put on sale iin the Trade Fortress! This is a unique one, so don’t miss it!

“Erudite Edifier – Anu” is all set to evolve into “Enlightened Mentor – Anu” with the help of “Stardust Alien” via Power Release! A Terror Stage “Raging of Ancient God” will be available at 10:00 pm on 26 Oct to give Summoner a new hell-like challenge!

With the Power Release of Anu, the strength of characters from “Major Gods of Babylon – Refinement” can be enhanced! 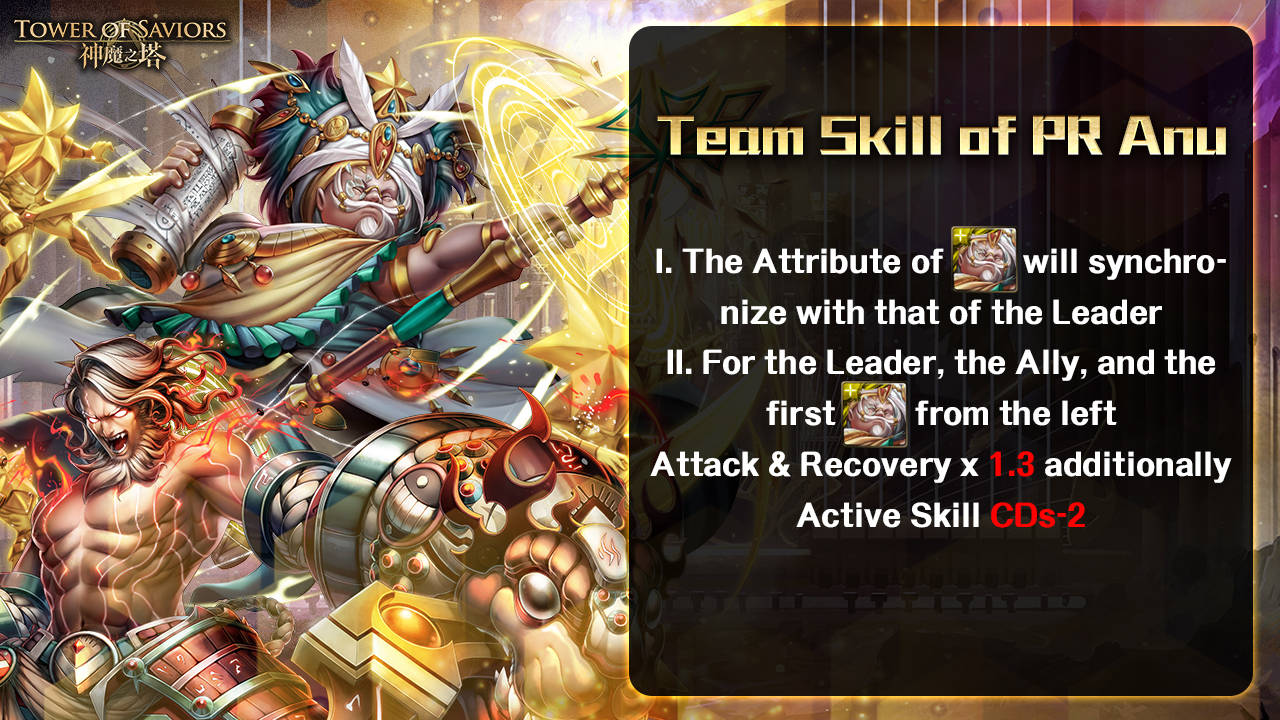 Upon Power Release, you can activate the combined skill “Ultimate Blade of Fatality” with “Enlightened Mentor – Anu” & 7* Monsters of “Major Gods of Babylon Reborn – Refinement” (Lv 50 or above):

Turn all Runestones into fixed numbers of Water, Fire, Earth, Light and Dark Runestones.  For 1 Round, extend Runestone-moving time to 20 seconds; the more number and Attributes of Runestones dissolved, the higher the Team Attack, to the max x 6 for 30 Runestones of 5 different Attributes dissolved. 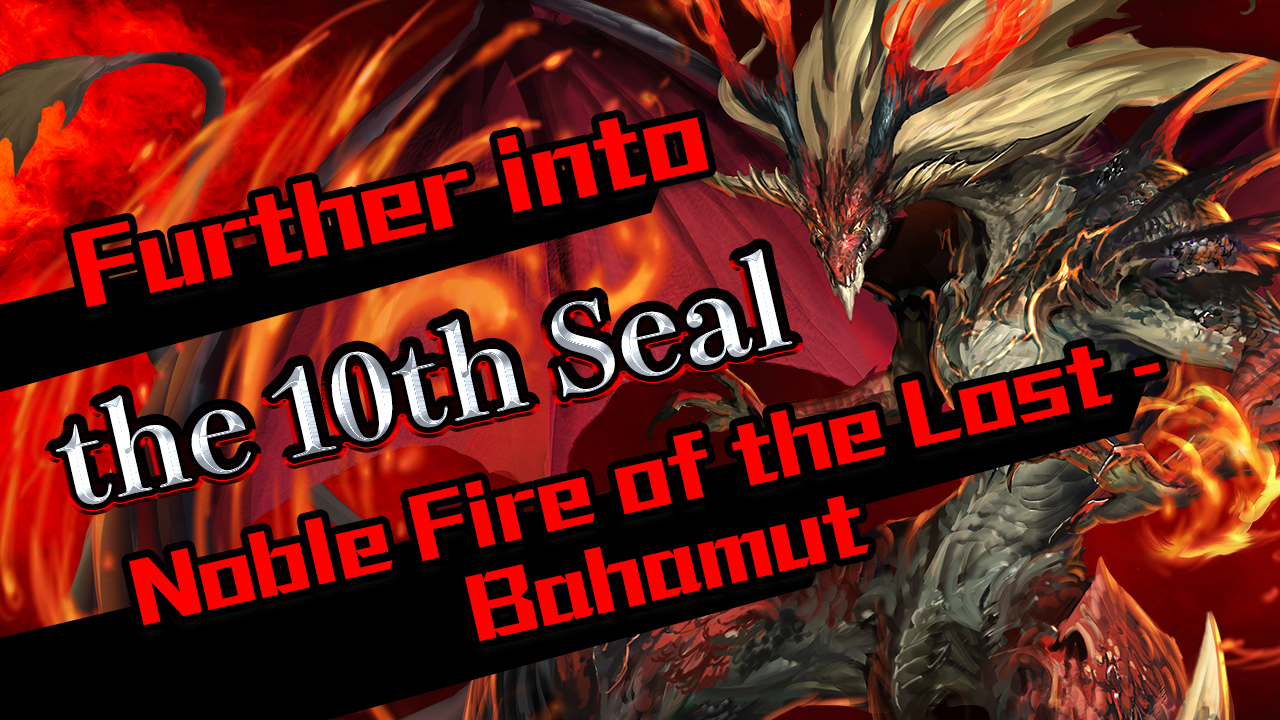 After defeating “Resonance of the World – Zana”, Summoner can bring members other than Dragons to “Eternal Prison” starting from 4:00pm on 30 Oct (Tue). Remove every obstacle and get ready for the keeper “Noble Fire of the Lost – Bahamut”!

After defeating Bahamut, Dragons will not be forbidden anymore!

As the last keeper of the 10th seal, the challenge is not going to be easy. During the 1st Phase, all positions will be burned.  Every time when a burned position is touched, 20% of Summoner’s HP will be deducted. The enemy only receives Damage dealt by Enchanted Runestones. 25% of Summoner‘s HP will be deducted when the enemy attacks (regardless of all Damage-reducing and Willpower Skills); the more number of Damage the Summoner received, the more the enemy’s Attack will increase. As for the 2nd phase, you need to experience it on your own…

The opening of “Mechanical City Gate” to be announced

Apart from beating “Bahamut”, Summoners have to gather different “Tunestones” before you can step into the next area “Mechanical City Gate”! Challenge the “Eternal Prison” to get them! 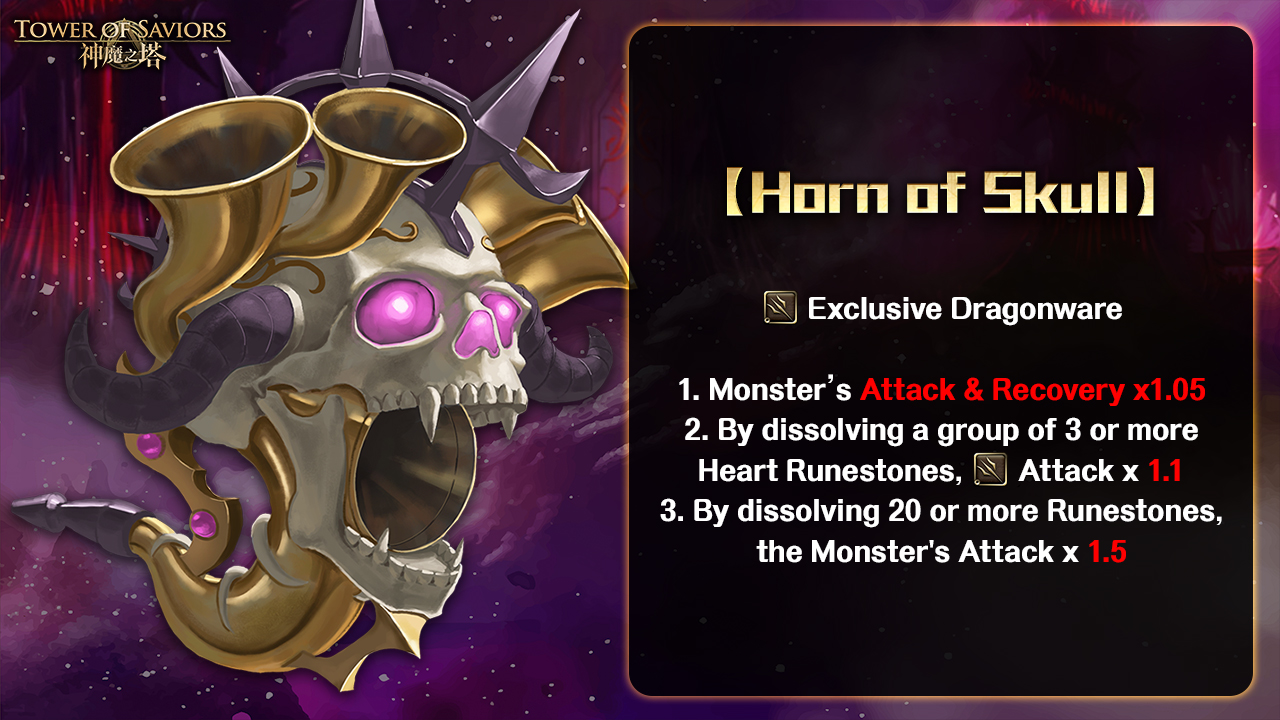 Upon collecting all “Tunestones” in the “Eternal Prison”, you’ll be rewarded with a very rare dragonware “Horn of Skull (Pattern)” as a recognition. The dragonware is suitable for all Demons! 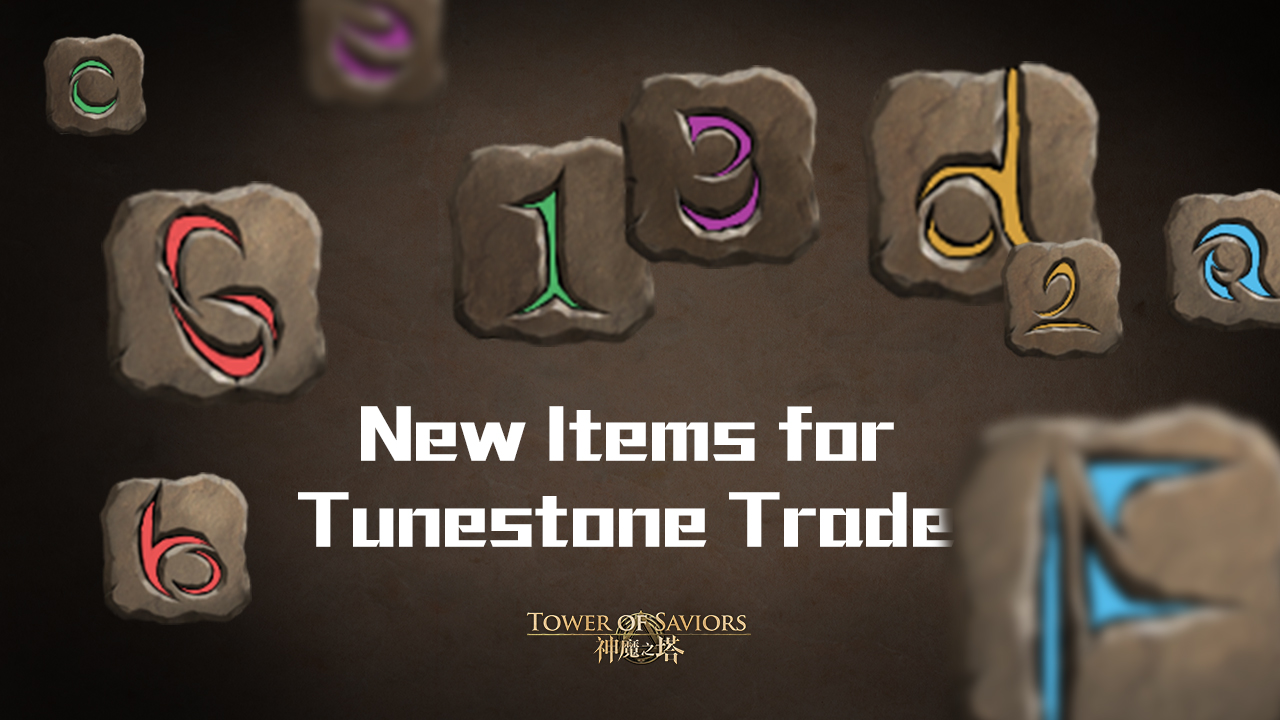 Trade Fortress is available for Tunestone exchange during the opening of “Eternal Prison”. Summoners can use certain number and types of Tunestones in exchange for “Silver Spell”, “Silver Amulet” , “Silver Madhead” & “Harpy”.

The demo introduces “The Best Runner – Elite” as a battle stage. “Mobile Fortress the Destroyer” will use “Ore of Corona” to smash the enemies with Machinas!