In version 16.2, “Blodgett” will be setting up the cruel ultimate stage “Eye Hunting” next week! The last area of the 10th Seal “Mechanical City Gate” will unlock and get yourself ready for the 10th Sealed Lord “Apocalyptic Rebirth – Shamash”! Light-exclusive drawing machine “Collector’s Deck” rolls out next monday with the new characters of “Soaring Sacredness – Horus” & “Illuminated Savant”!

“Rascally Inventor – Blodgett” who hates cats so bad brings you the ultimate stage “Eye Hunting” at 10:00p.m. on 21 Dec (Fri). She’ll manipulate “the Triplets” to attack Summoners who get in the stage!

The enemy “Rascally Inventor – Blodgett” has two phases. During the 1st phase, Blodgett will not receive any Damage until her first Attack. Upon receiving Damage from the enemy’s attack in the first Round, all effects of non-Beasts in play will be cancelled by the enemy; Skill CDs and accumulated Rounds of all non-Beasts will be reset. When a Dark Combo is made, attacks of the Team will be nullified.  The more Dark Combos made, the more times the enemy attacks in the Round.  Only the first batch of Runestones dissolved will be counted.

During the 2nd phase, turn Runestones at fixed positions into 2 Light and 6 Heart Runestones, other Runestones into 22 Water, Fire, Earth and Dark Masked Runestones. Runestone-moving time will be reduced to 2 seconds. When a Dark Combo is made, the enemy recovers HP as much as the Damage dealt by Summoner in the Round (only the first batch of Runestones dissolved will be counted).

Dark Human “Blodgett” can activate “Dichotomy of Day & Night” upon 10 CD: Turn all Runestones into fixed numbers of Light and Dark Runestones.  If the Skill is activated in an even Wave, the Runestones will become Enchanted Runestones.

Those who conquer Bahamut can enter the last area “Mechanical City Gate” of the 10th Seal. Complete the challenges to meet the very strong boss “Apocalyptic Rebirth – Shamash” at 16:00, 17 Dec (Mon)! 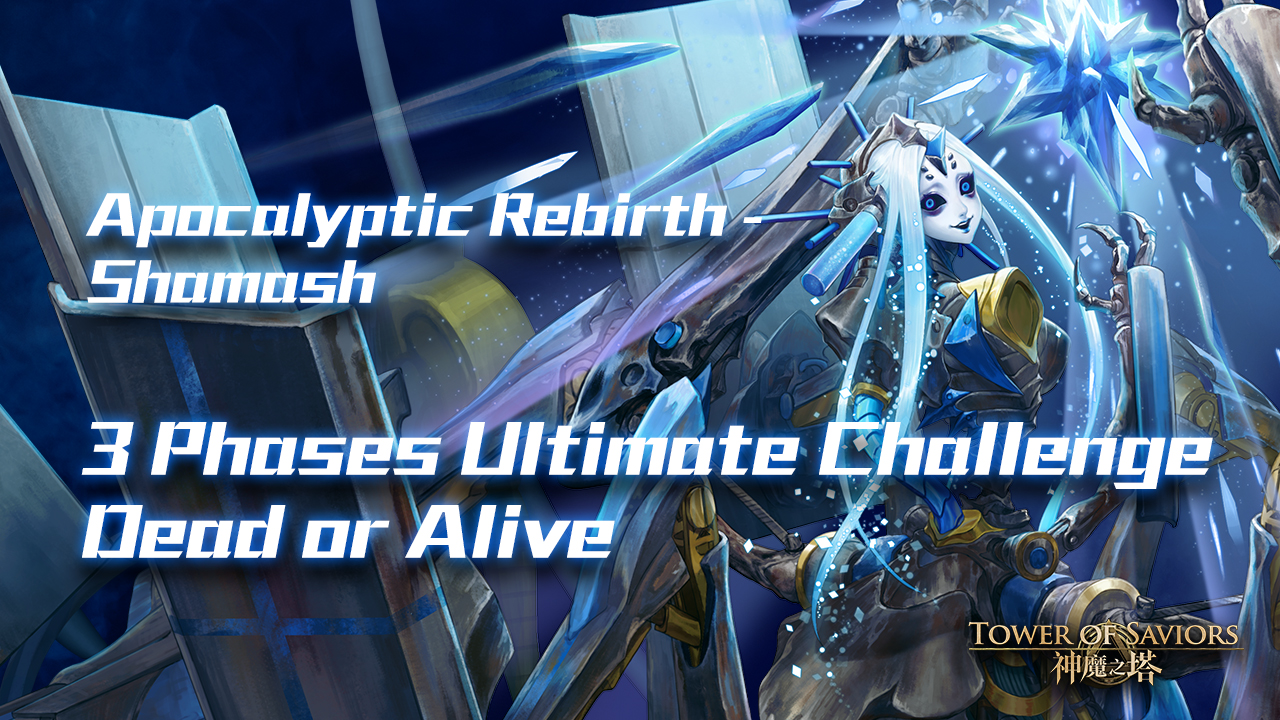 “Apocalyptic Rebirth – Shamash” has tremendous power more than you can imagine! You’ll face the 3 phases before beating her! During the 1st phase, the enemy receives Damage only after Summoner’s 40th attack.  If the above condition is fulfilled, the enemy’s CD becomes 2; its HP will be fully recovered and the number of attacks accumulated will be reset when its CD reaches 0. Upon receiving Damage from the enemy’s attack, 4 random Runestones will be frozen.  Frozen Runestones cannot be dissolved for 3 Rounds. The enemy disregards all Controlling Skills.

During the 3rd phase, at the beginning of the first Round, the enemy will clear the power gathered in the Craft Apparatus; all effects in play will be cancelled by the enemy; Skill CDs and accumulated Rounds of all Monsters will be reset. The enemy’s CD becomes 4. Different Boss Skills will appear each Round: Masked Path, Burning Land, Confinement, Sticky Land. The enemy receives no Damage (including Active Skills), regardless of all Controlling Skills. 100% of the enemy’s HP will be deducted if 60 Runestones are dissolved cumulatively (only the first batch of Runestones dissolved will be counted). 100% of Summoner‘s HP and the enemy’s HP will be deducted when the enemy attacks (regardless of all Damage-reducing and Willpower Skills).

Summoner who can beat all the 10th seal stages will be rewarded with 10 Diamonds, Golden Madhead x1 & Tunestones x1 set (20 in total) in recognition of strength. 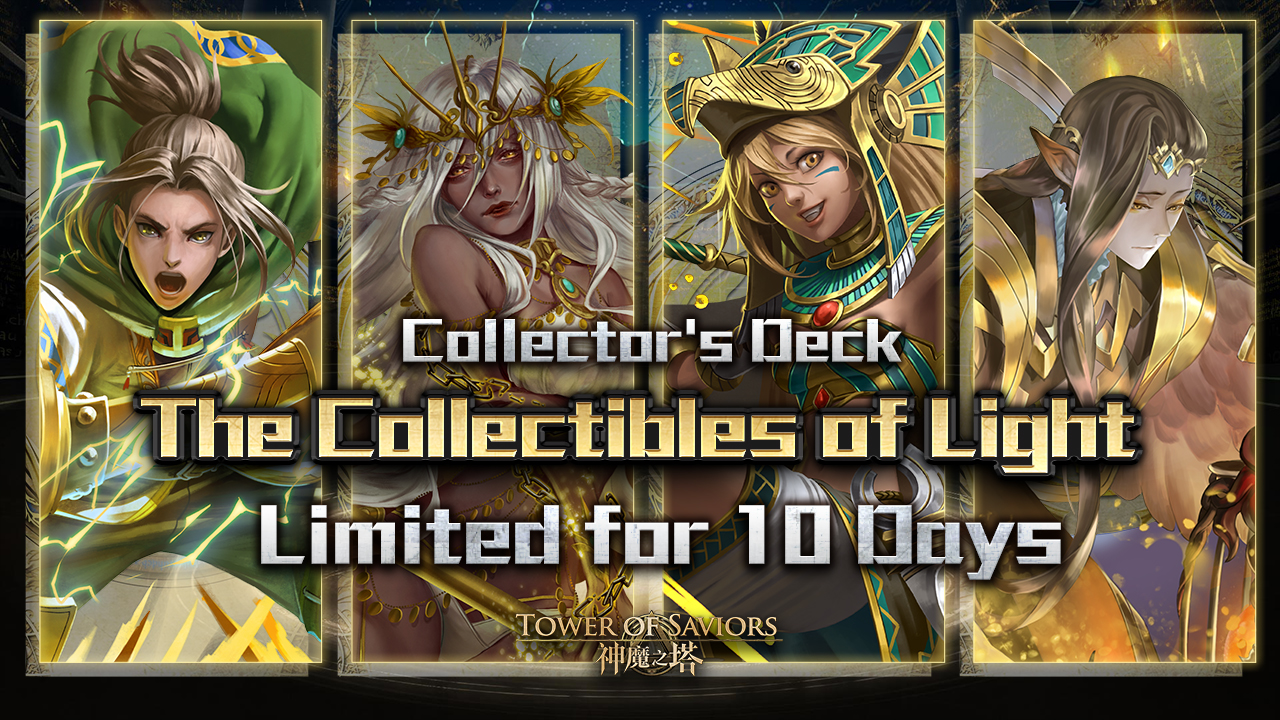 From 17 Dec (Mon) – 26 Dec (Wed), “The Collectibles of Light” will be launched, including new character “Horus” (skill lv. 10) & “Illuminated Savant” (max skill lv) and other light monsters. There are 30 in total and some of them are duplicate.

Explode the columns of Runestones below 3 Gods to generate Enchanted Runestones of the Attribute of the Monster in that column. 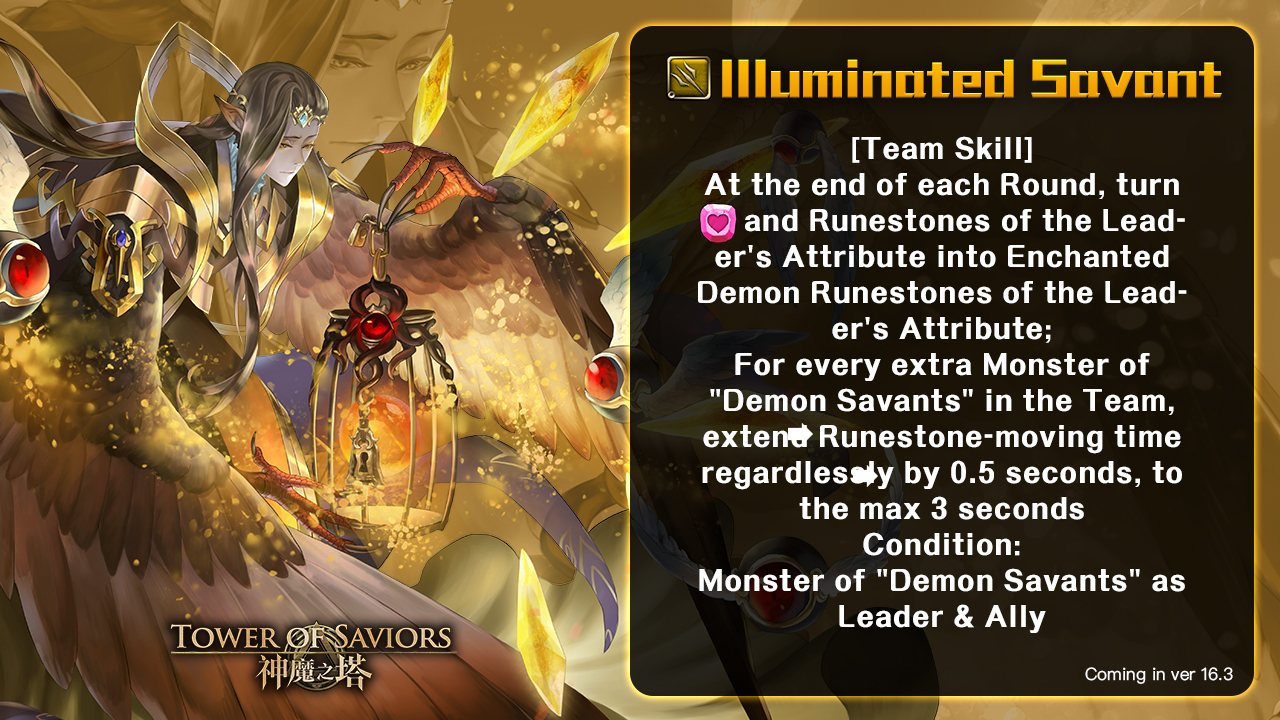 * The effect of the team skill will be launched on 2 Jan (Wed) upon version 16.3 update

When using “Demon Savants” as Leader & Ally, Enchanted Demon Runestones & moving time extension will be granted in the team skill. 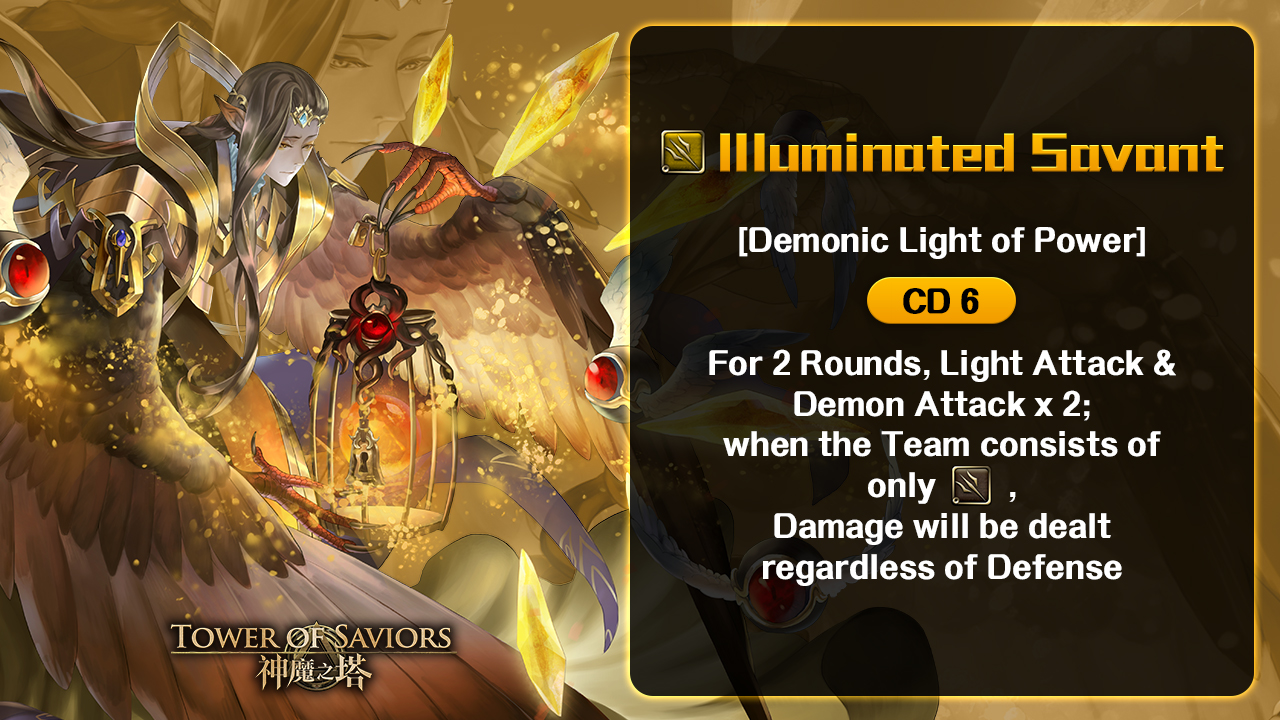 Illuminated Savant can activate “Demonic Light of Power” upon 6CD:

For 2 Rounds, Light Attack & Demon Attack x 2; when the Team consists of only Demons, Damage will be dealt regardless of Defense.

The demo introduces “At Death’s Door – Advanced” of Tales of the Nile as a battle stage. Blodgett will join “Reincarnated Warlord – Lü Bu” to defeat the enemies!