Few days later we will be moving on to the version 16.3 “TOS×FAIRY TAIL”! Famous anime characters of “FAIRY TAIL” will soon step into the realm! Upon the update, the first crossover ultimate stage “Dragon Vanished on 7 July” is introduced with the strong enemy “Fire Dragon King – Igneel”! 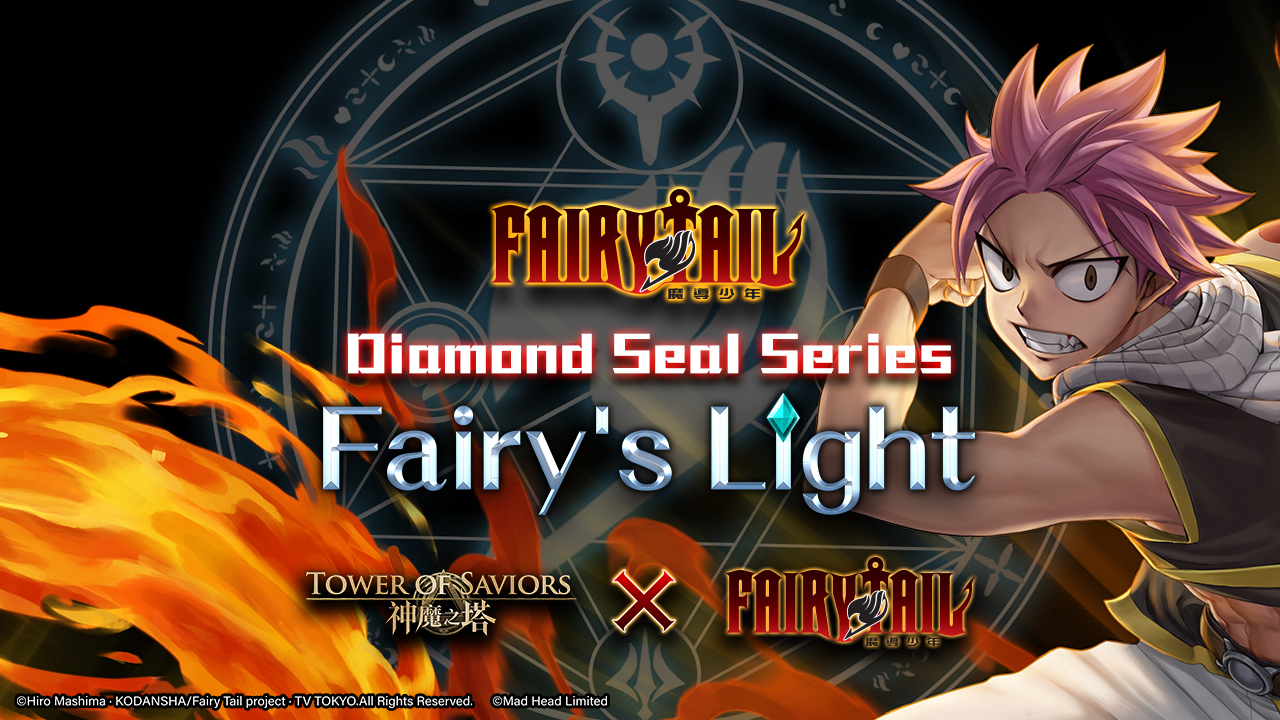 8 characters of “FAIRY TAIL” including “Natsu”, “Erza” & “Lucy” will be included in the Diamond Seal! Amelioration will be open at the same time once the characters are launched. 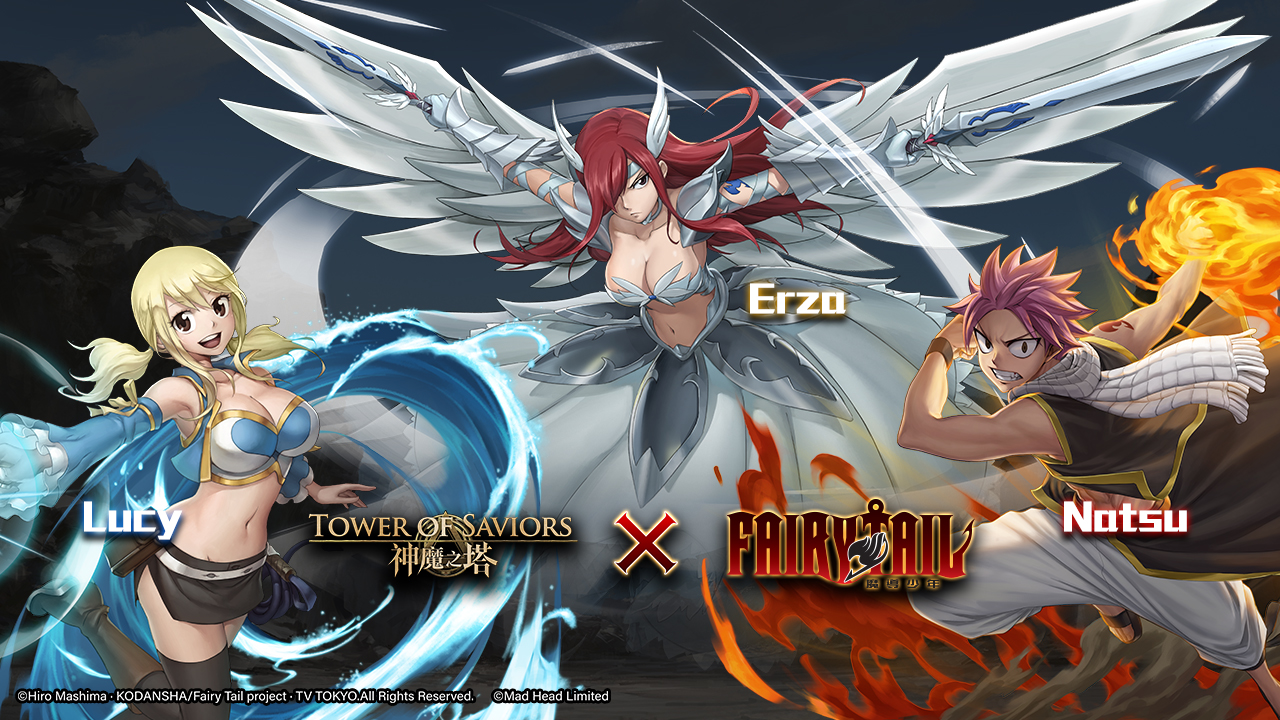 “FAIRY TAIL” Diamond Series will dive into our world on 2 Jan (Wed) to bring a new shock to us. Among the crossover characters, “Natsu”, “Erza” & “Lucy” are the rare with outstanding abilities. Now, let me introduce one by one.

The powerful Natsu can activate his dual skills upon 6 CD & 7 CD.

“Fire Dragon’s Roar”: Explode the columns of Runestones below Fire Members or Dragons to generate Enchanted Runestones.  Deal 1.5 million Fire Damage to all enemies, regardless of Defense.  CDs of all enemies will be delayed for 1 Round.

With the increased damage on dragons as mentioned in his leader skill and team skill, it further boosts the attack of “Fire Dragon’s Roar” to the enemies. 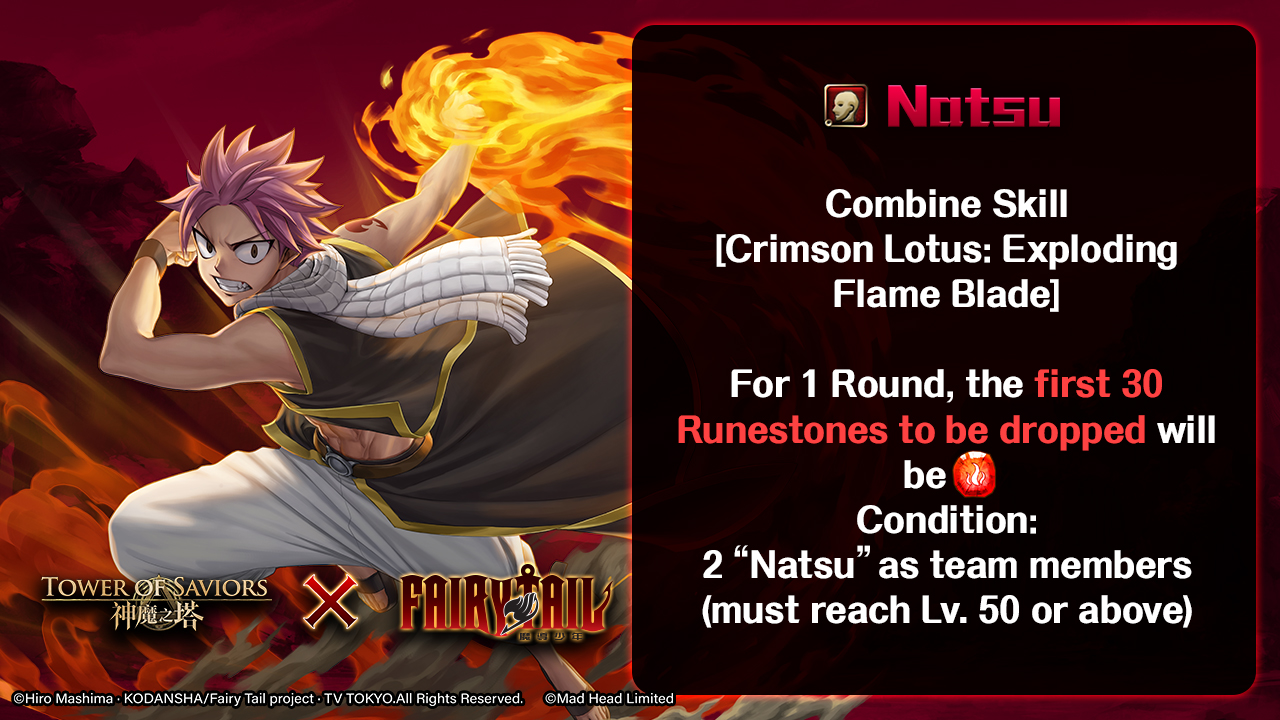 When there are 2 “Natsu” (Lv. 50 or above) as team members, “Crimson Lotus: Exploding Flame Blade” can be activated to engulf the enemies with fire!

Lucy can activate “Gate of the Water Bearer Opening: Aquarius” upon 6CD: 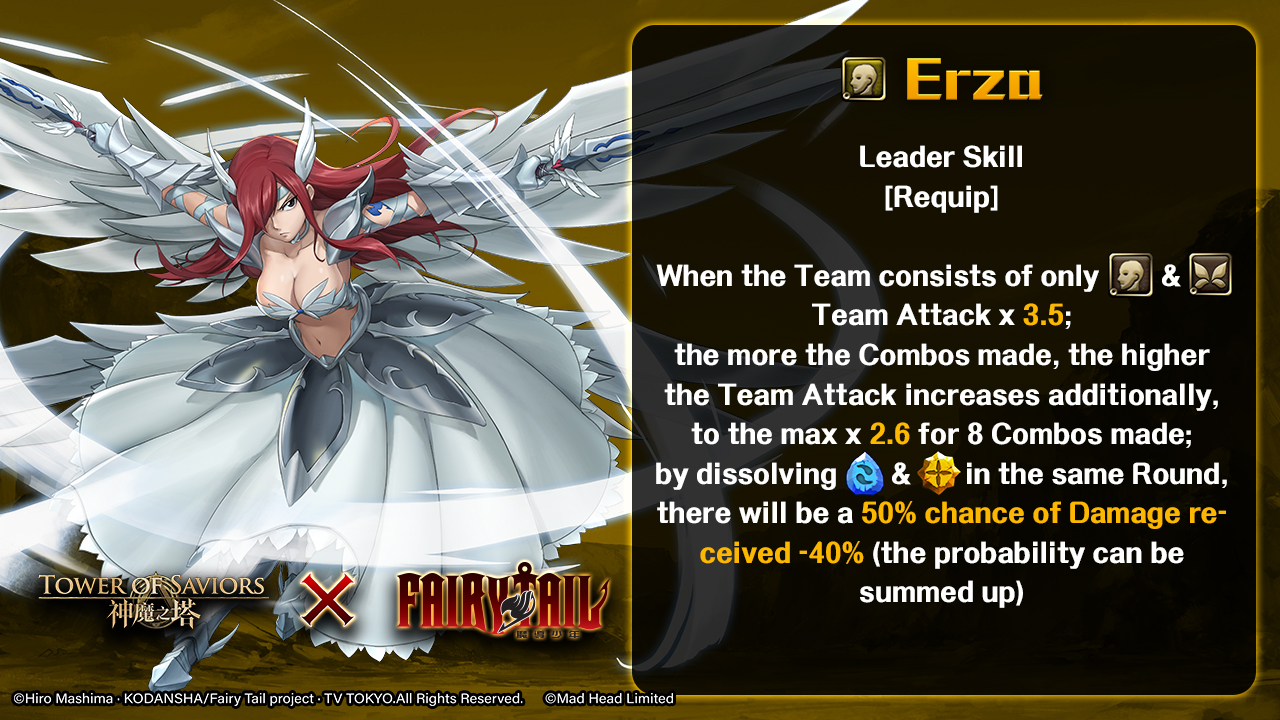 When the Team consists of only Humans and Elves, Team Attack x 3.5; the more the Combos made, the higher the Team Attack increases additionally, to the max x 2.6 for 8 Combos made; by dissolving Water and Light Runestones in the same Round, there will be a 50% chance of Damage received -40% (the probability can be summed up). 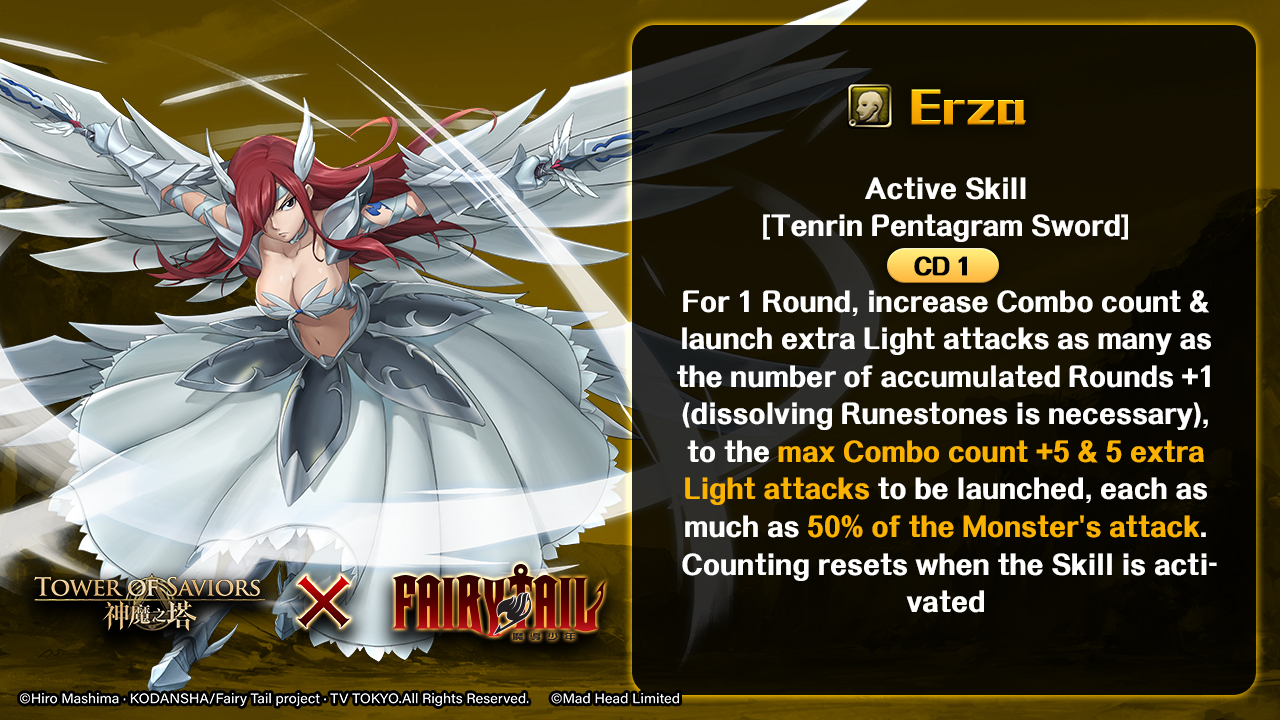 Fire Dragon “Fire Dragon King – Igneel” will be available for challenge at 22:00, 4 Jan (Fri) in the ultimate stage. This lethal stage is waiting for Summoners to defeat…

During the 1st phase, Igneel will not receive Damage dealt by Fire attacks. Upon receiving Damage from the enemy’s attack for the first time, a random column of Runestones will be turned into Fire Runestones; for the second time, a random row of Runestones will be turned into Fire Runestones. The above runs as a cycle. 1 random position will be burned.  The burning area will extend to 2 adjacent positions each Round afterwards.  Every time when a burned position is touched, 20% of Summoner’s HP will be deducted. 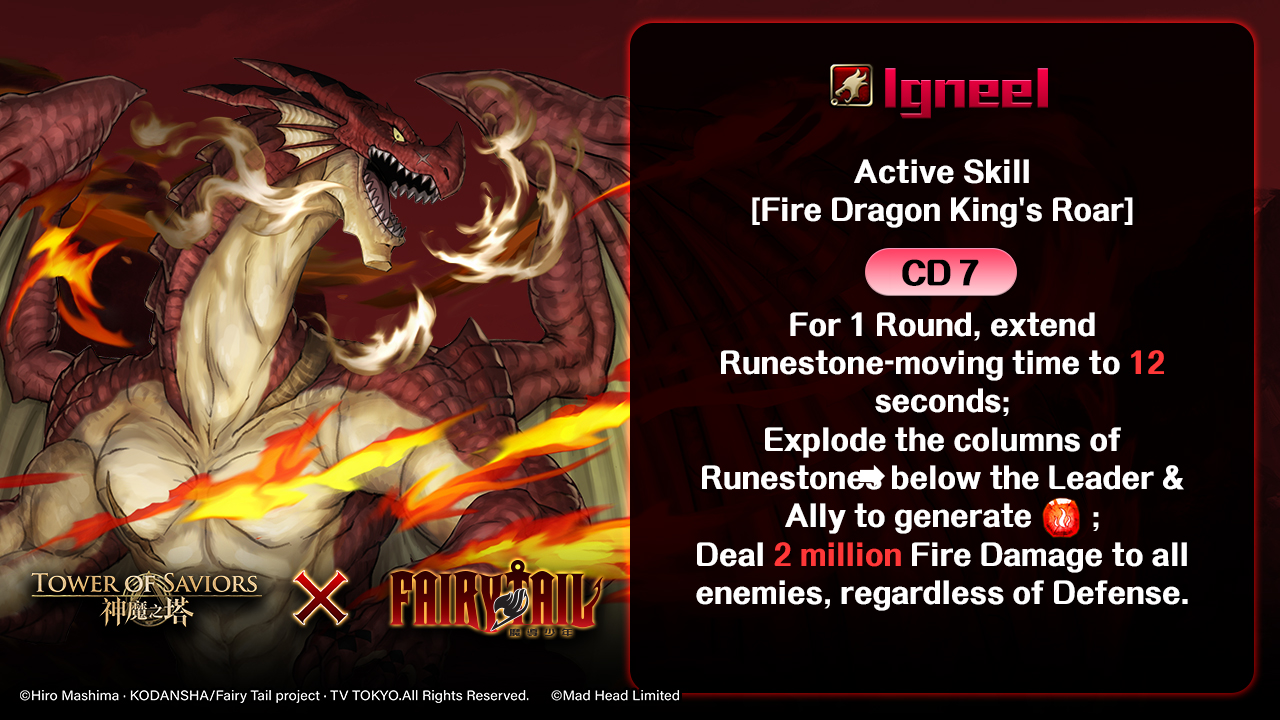 For 1 Round, extend Runestone-moving time to 12 seconds; explode the columns of Runestones below the Leader and Ally to generate Enchanted Fire Runestones; deal 2 million Fire Damage to all enemies, regardless of Defense. Really a practical skill! 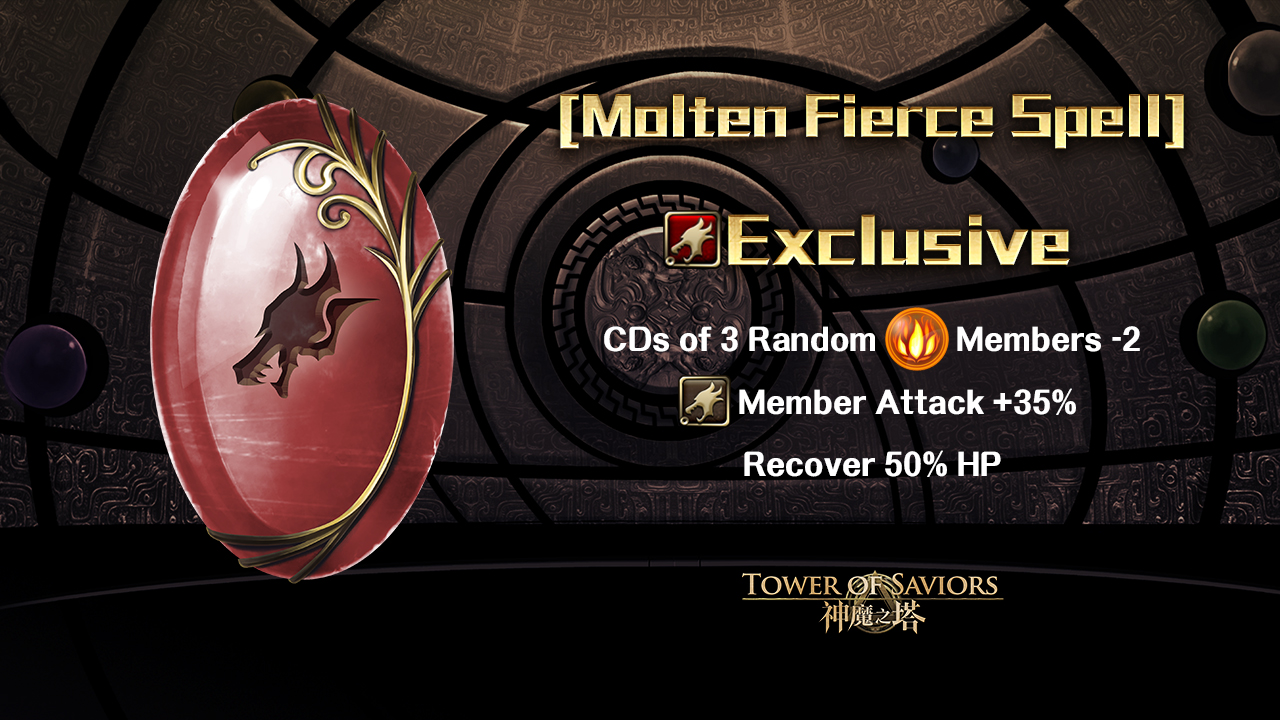 Upon version update, “Panther Lily”, “Carla” & Outfit of “Advancing Commander – Belle” will be available for redemption with your Prize Points!

Turn the top row of Runestones into Enchanted Earth Runestones.  For 1 Round, Single Attack becomes Full Attack; by dissolving Runestones of 3 or more Attributes, the Monster’s Attack x 8 (no sharing to other Team Members). 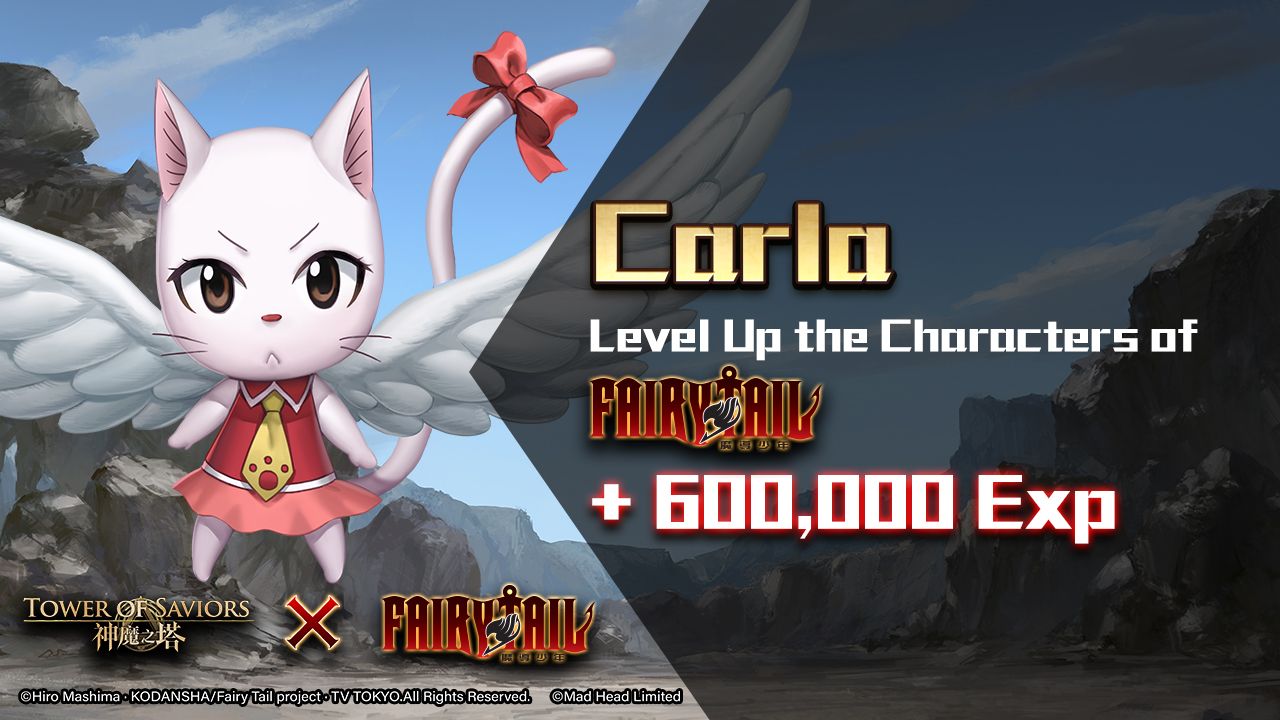 When adding “Carla” as a level-up material for characters of “FAIRY TAIL”, you can get 600,000 Exp! Summoners can use Prize Points to redeem it in Arena!

Bi-weekly character “Juvia” will be launched during version 16.3. Challenging her stage by bringing FAIRY TAIL Collaborative Monsters will grant you access to the Extra Wave of “Mavis”!

“Juvia” & “Gray” (Lv. 50 or above) can activate the combine skill “Unison Raid” to turn all Runestones into Heart and Enchanted Water Runestones of fixed numbers and fixed positions.  For 1 Round, Heart Runestones also possess the effect of Water Runestones.

If there are 2 “Mavis” & 4 other “FAIRY TAIL Collaborative Monsters” in the team, Active Skill CDs of each “Mavis” will be reduced by 10 after entering a stage.

Based on the manga “Fairy Tail” by Hiro Mashima originally serialized in the weekly Shonen Magazine published by KODANSHA LTD.