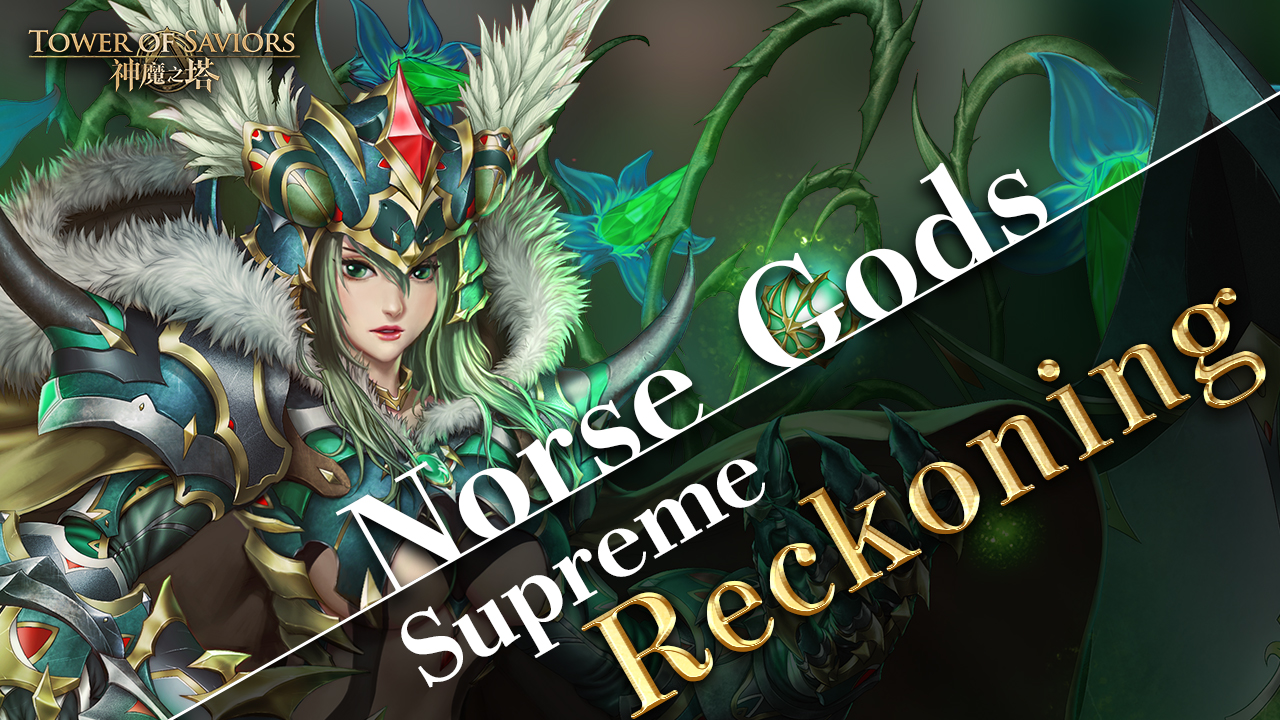 Into the 5th week of version 17.0, VR Norse Gods will receive new strong power with “Supreme Reckoning”! Besides, “Frigg” will be included in the coming “Collector’s Deck”! And Copernicus Ultimate Stage “Manipulation of Mass” will release next week!

New System “Supreme Reckoning” Debuts! Norse Gods (VR) will take the lead to get the new forms starting from 16:00 (GMT+8), 11 Mar (Mon). Summoner can merge the VR Norse Gods into the whole new characters with the required SR materials, including “Shedu” x3 & “Giallar the Hornist” x2. 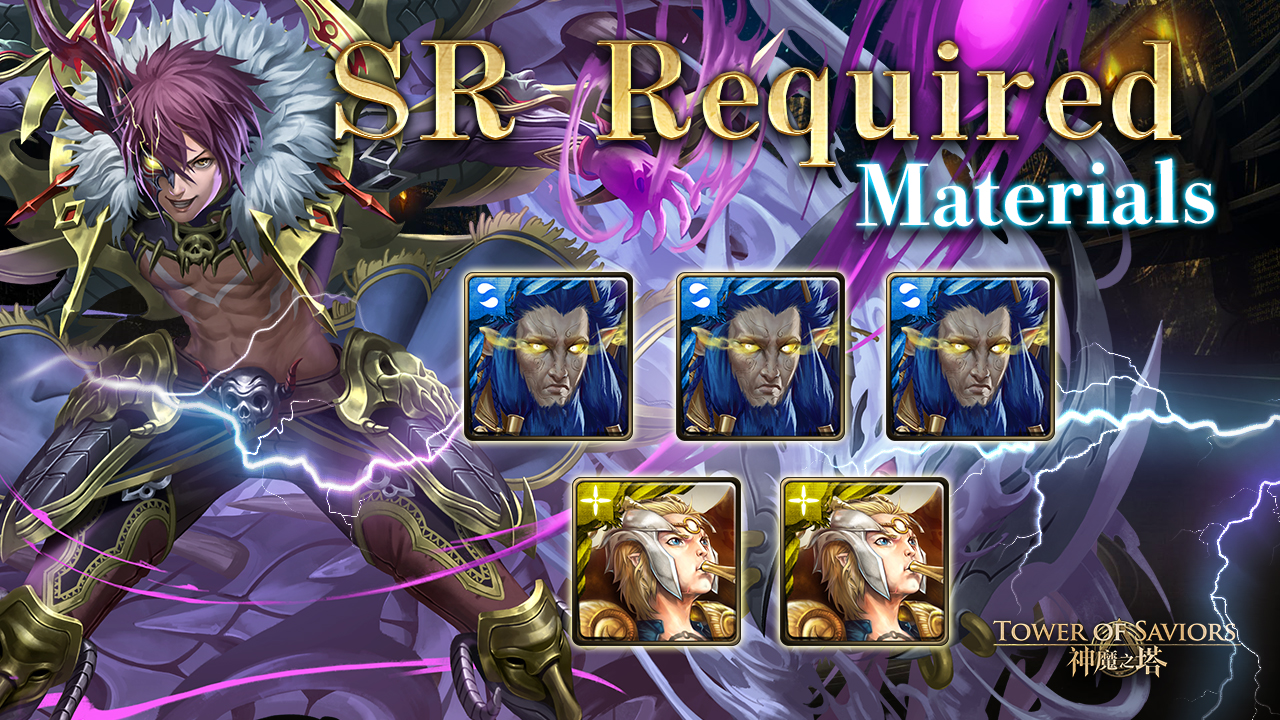 With SR, the leader skills of Norse Gods have been greatly buffed:

For 1 Round, all Runestones of Monster’s Attribute to be dropped will be Enchanted God Runestones; by dissolving 10 or more God Runestones, the Damage received in the Round will not lead to your defeat (only the first batch of Runestones dissolved will be counted). 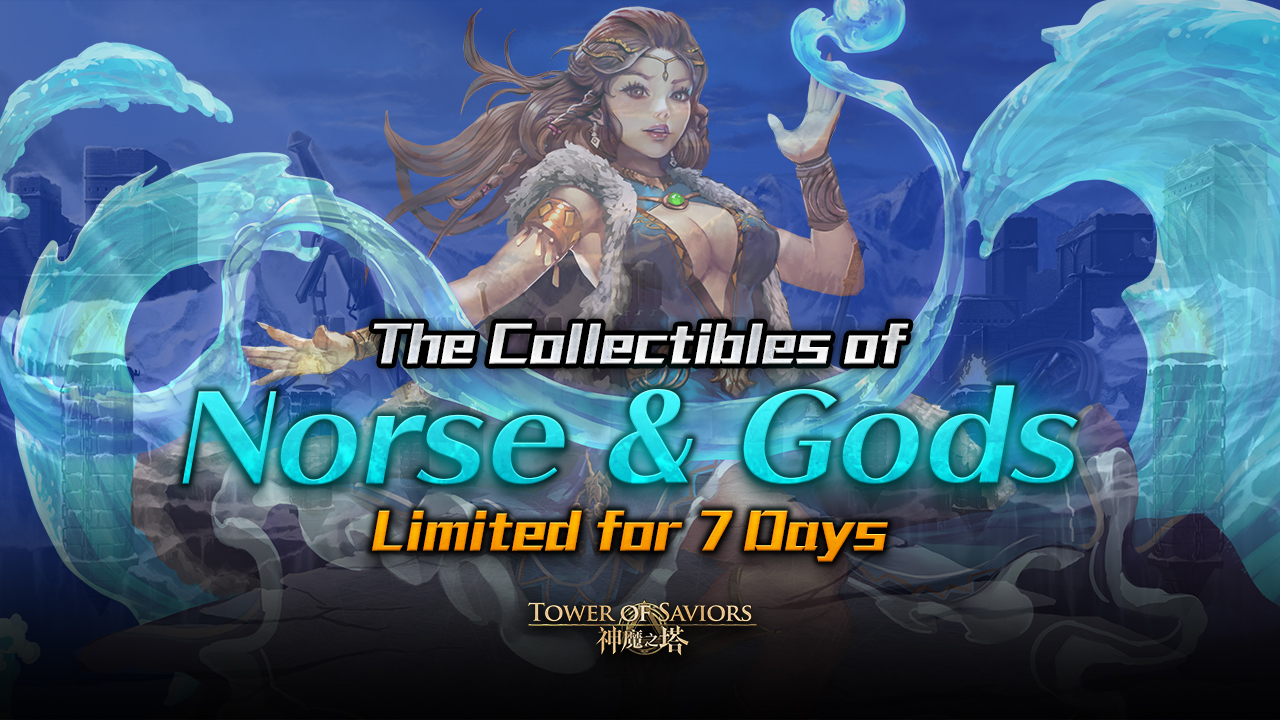 During the period between 11 Mar (Mon) – 17 Mar (Sun), “The Collectibles of Norse & Gods” will be available for you all! This drawing machine includes the new character “Frigg” and PR “Norse Gods”! “Frigg” is the jackpot with dual max while the PR Norse Gods will be All Max! If you get “Frigg” for the 1st time, you can be rewarded with SR material ── Shedu x1! 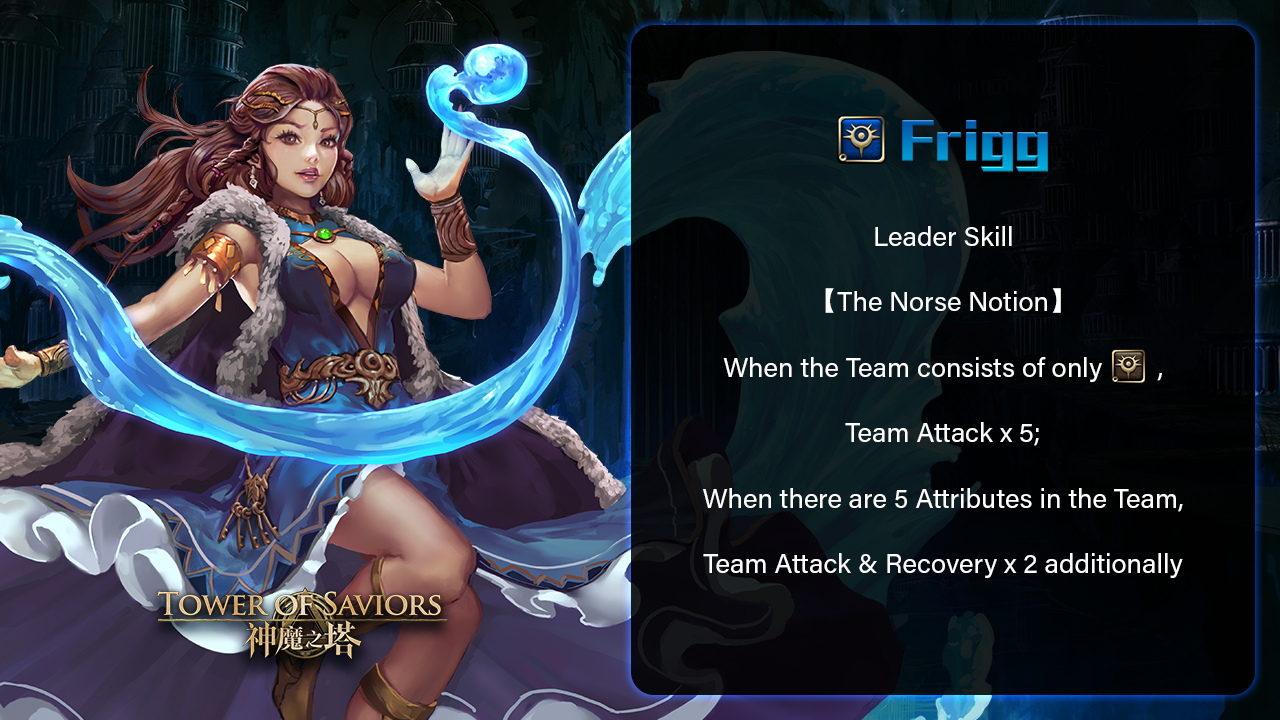 “Frigg” has the leader skill “The Norse Notion”:

When the Team consists of only Gods, Team Attack x 5; when there are 5 Attributes in the Team, Team Attack & Recovery x 2 additionally.

“Frigg” can activate “Palm of the World” upon 6 CD:

This Skill can be activated only when the Leader is God.  For 1 Round, change the Attribute of all enemies into the Monster’s Counter Attribute; when the effect is in play, Team Attack x 1.8; extend Runestone-moving time regardlessly by 2 seconds.  If the Leader is a Monster of “Norse Gods”, the Monster’s current Skill CD -5 at the end of the Round. 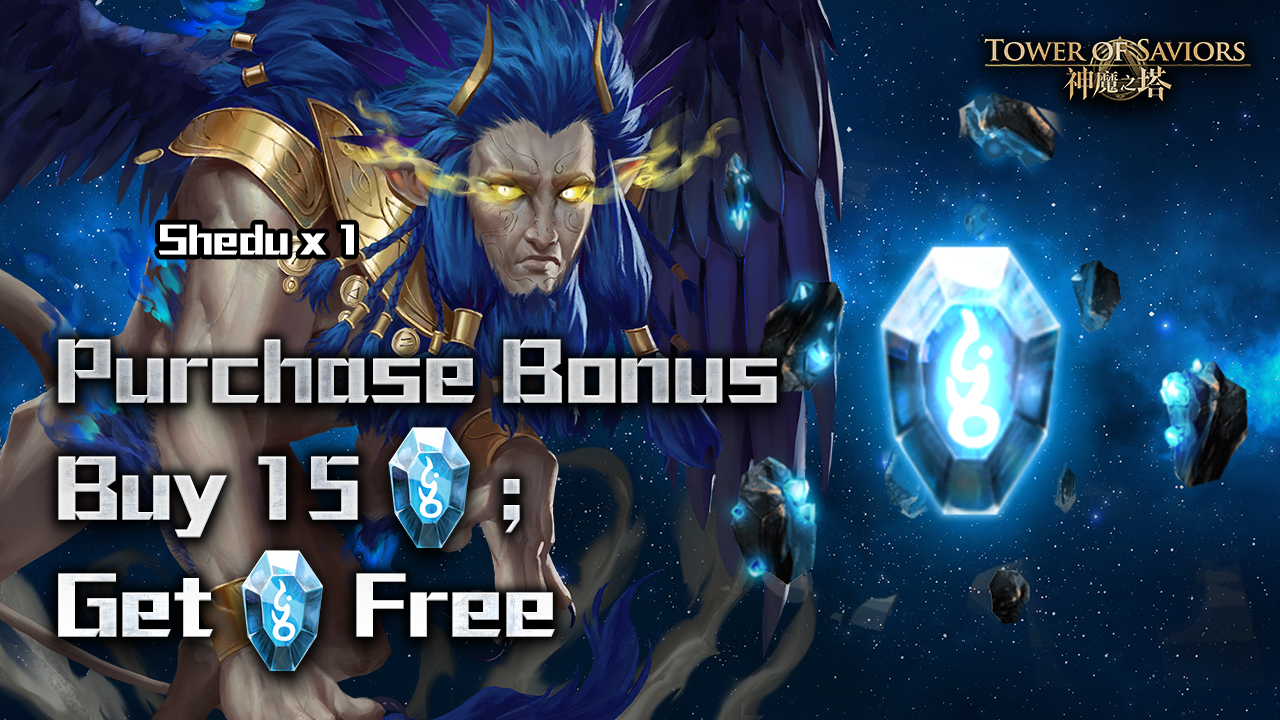 To celebrate the SR Norse Gods & the dawn of “Frigg”, Diamond Purchase Bonus is available for a limited period! From 11 Mar to 17 Mar, with a single purchase of 15 Diamonds or more, you can get extra 15 Diamonds & Shedu x1 FREE (one-time reward)!

“Orbits of Coelestium – Copernicus” will set up the ultimate stage “Manipulation of Mass” at 22:00, 15 Mar (Fri)! He will team up with “Marie Curie”, “Edison” & “Socrates” to trap Summoners in the stage!

During the 2nd phase, CD of the Copernicus first attack will be 1. A random column of positions will be shot.  By touching any of the shot positions, Runestone movement will be stopped immediately. When a Light Combo is made, attacks of the Team will be nullified.  The more Light Combos made, the more times the enemy attacks in the Round.  Only the first batch of Runestones dissolved will be counted. The enemy disregards all Controlling Skills. 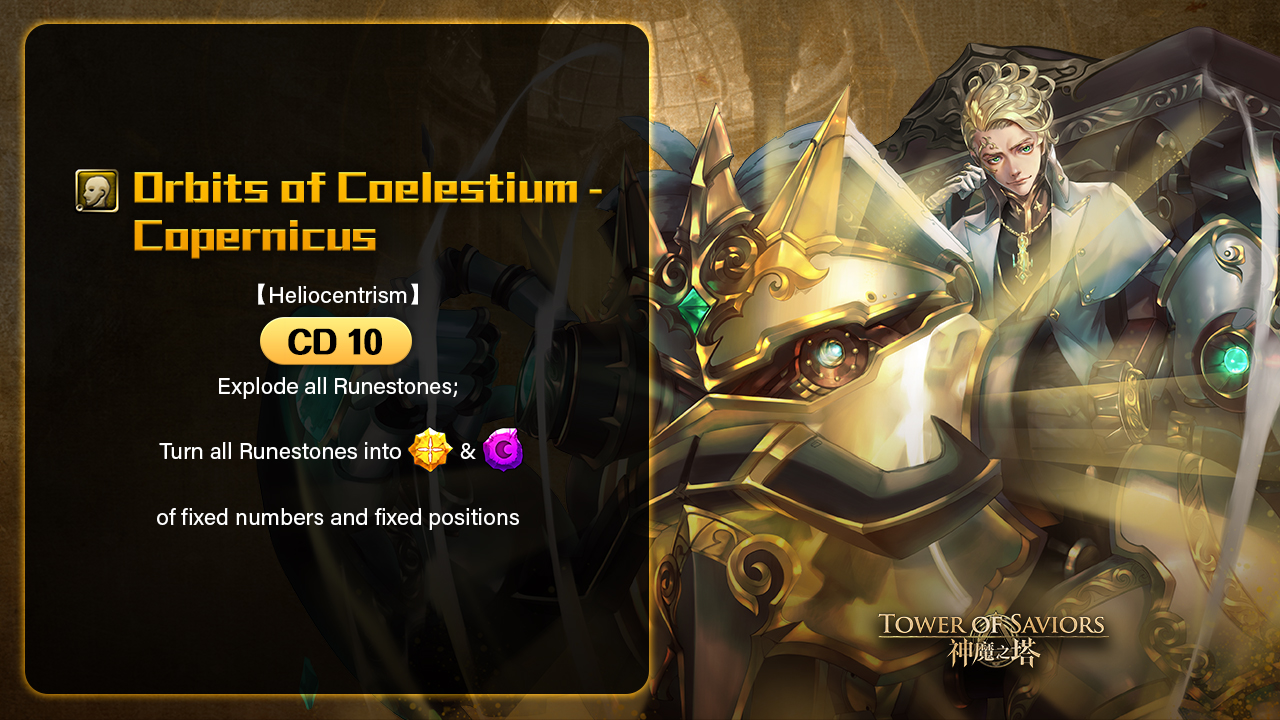 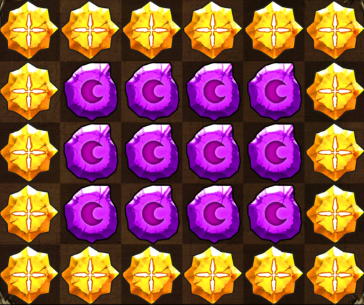 The last character of bi-weekly “Science & Philosophy” series – “Philosophy of Empiricism – Bacon” will be online next monday! Fire Human “Bacon” can activate “Scheme of Raid” upon 7CD:

Record the present distribution of Fire Runestones.  This Skill can be deactivated anytime.  Upon deactivation of the Skill, explode the Runestones at the recorded positions to deal non-Attributive Damage to all enemies.