Version 17.1 “Tears of Beauty” will begin next monday! Please welcome the brand new series “Unearthly Charms”! Besides, “Voluntary Victim – Wang Zhaojun” will be the 1st ultimate stage boss in “Love Your Abuse”!

Gorgeous elves and demons with incredible allures will step into the realm. However, they all have a sinister side despite their beauty and will bewitch all humans at all costs! 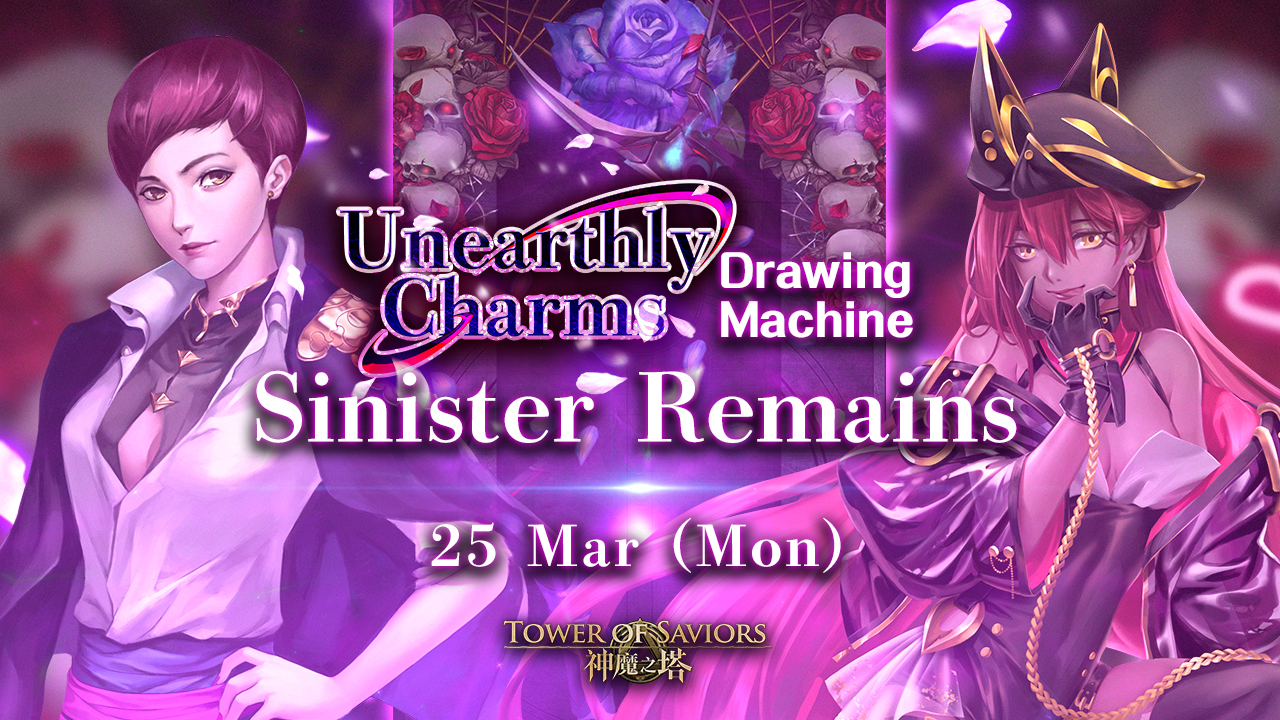 8 Characters of “Unearthly Charms” will be added into the diamond seal “Sinister Remains” with their own characteristic skills on 25 Mar (Mon)!

In alliance with “Unearthly Charms”, the power of Elves and Demons has significantly increased! Rare characters “Origin of All Sins – Eve”, “Militant Heroine – Wu Zetian” & “Diva of Obsession – Cleo” are the outstanding characters that will raise the bar of their own race! Let me introduce them to you one by one.

“Origin of All Sins – Eve” has the leader skill “The Original Sin”: 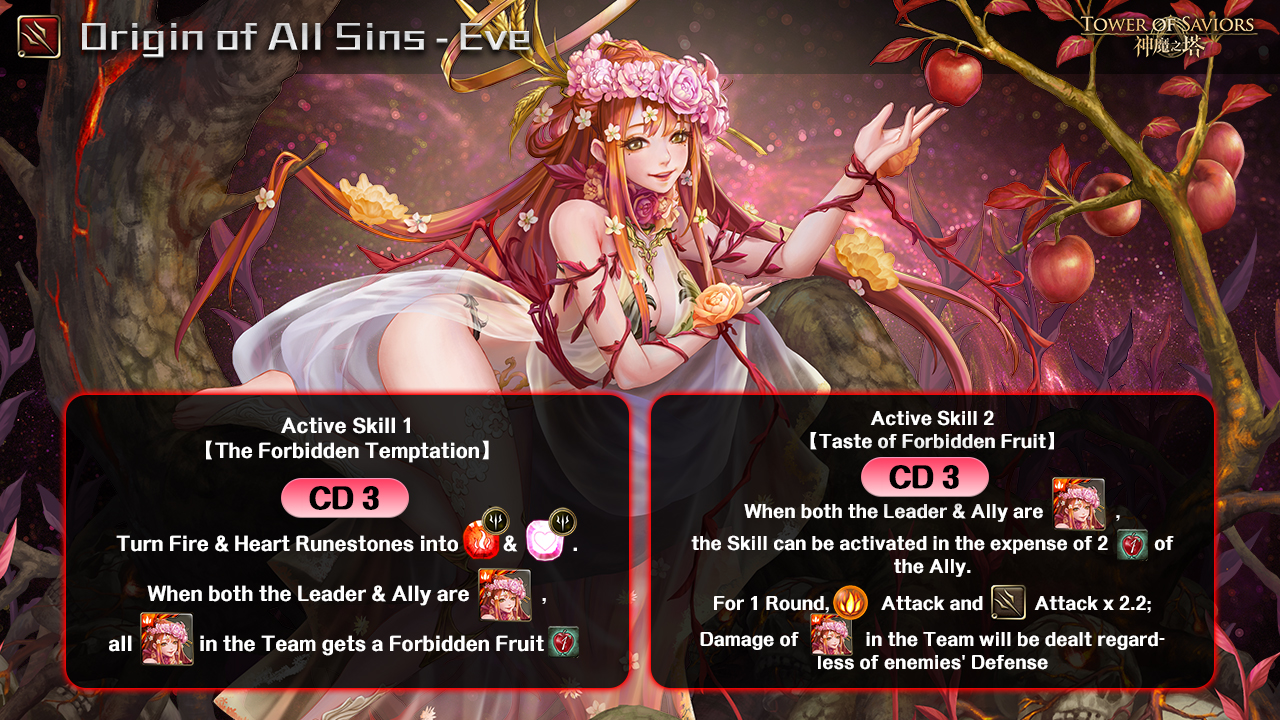 Fire Demon “Origin of All Sins – Eve” can activate “The Forbidden Temptation” & “Taste of Forbidden Fruit” upon 3 CD: 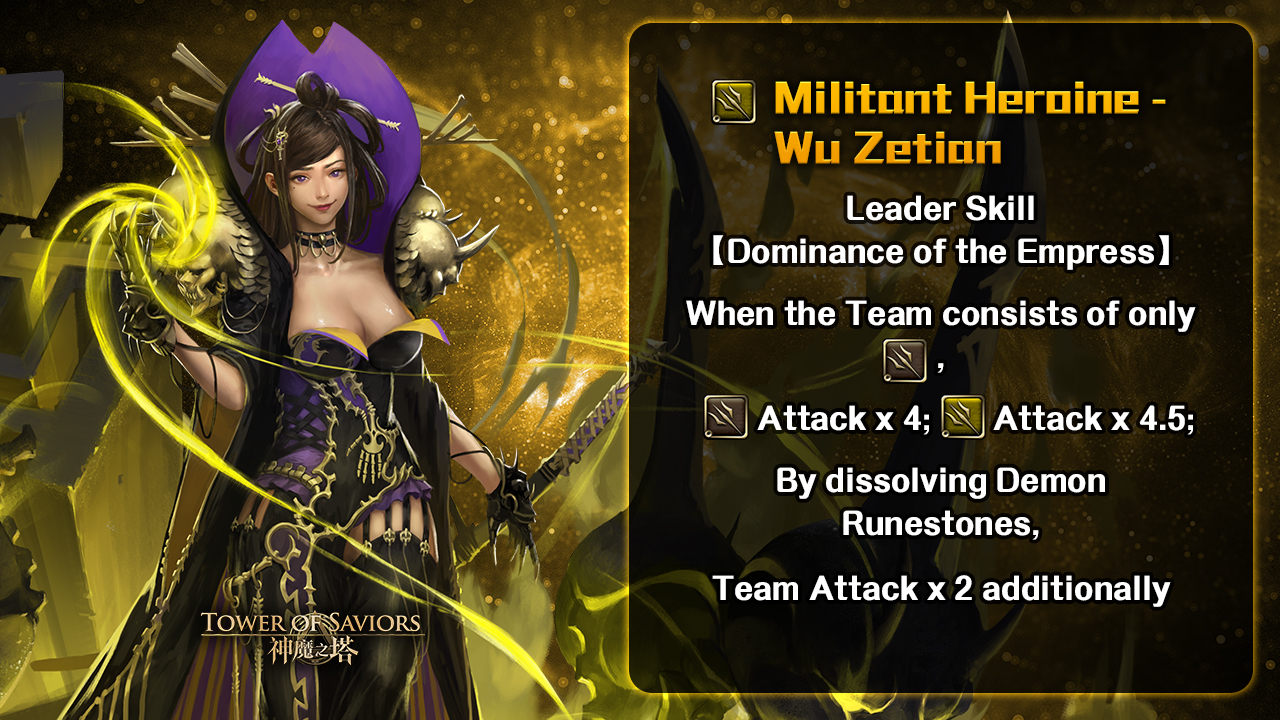 ”Militant Heroine – Wu Zetian” has the leader skill “Dominance of the Empress”: 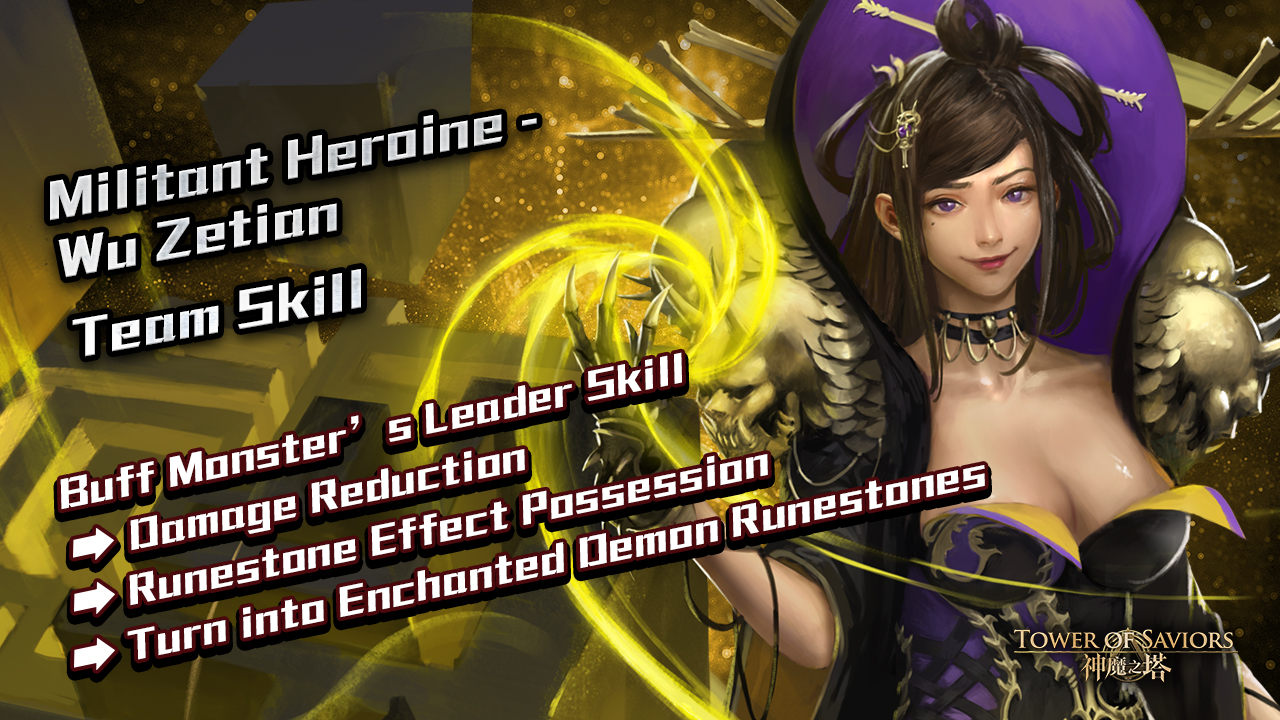 Explode Runestones not of Team Members’ Attributes to generate Enchanted Runestones.  For 1 Round, extend Runestone-moving time to 12 seconds. For every 2 groups of Runestones dissolved, each Demon and Light Member in the Team launch an extra Light attack as much as 30% of its own attack, to the max 5 extra attacks to be launched by each Monster (only the first batch of Runestones dissolved will be counted).

”Diva of Obsession – Cleo” has the leader skill “Beauty of the World”:

When the Team consists of only Demons and Elves, Team Attack, HP & Recovery x 1.5; by dissolving a Runestone in a corner, Team Attack x 1.25 additionally, to the max x 5 for dissolving Runestones in 4 corners (only the first batch of Runestones dissolved will be counted).

Dark Demon “Diva of Obsession – Cleo” can activate “Top of the Pyramid” upon 6 CD:

Tap and turn 2 columns of Runestones into Enchanted Dark Demon Runestones.  For 1 Round, Demon and Elf Attack x 2.

Upon version 17.1 update, the exclusive skill level-up materials for “Unearthly Charms”, Golden Boy & Jade Maiden, (30 each) will be put on sale in Trade Fortress. When levelling up the skill of “Unearthly Charms” series, the accumulated Battle Rounds of the target Monster increase by 600; other characters increase by 50. 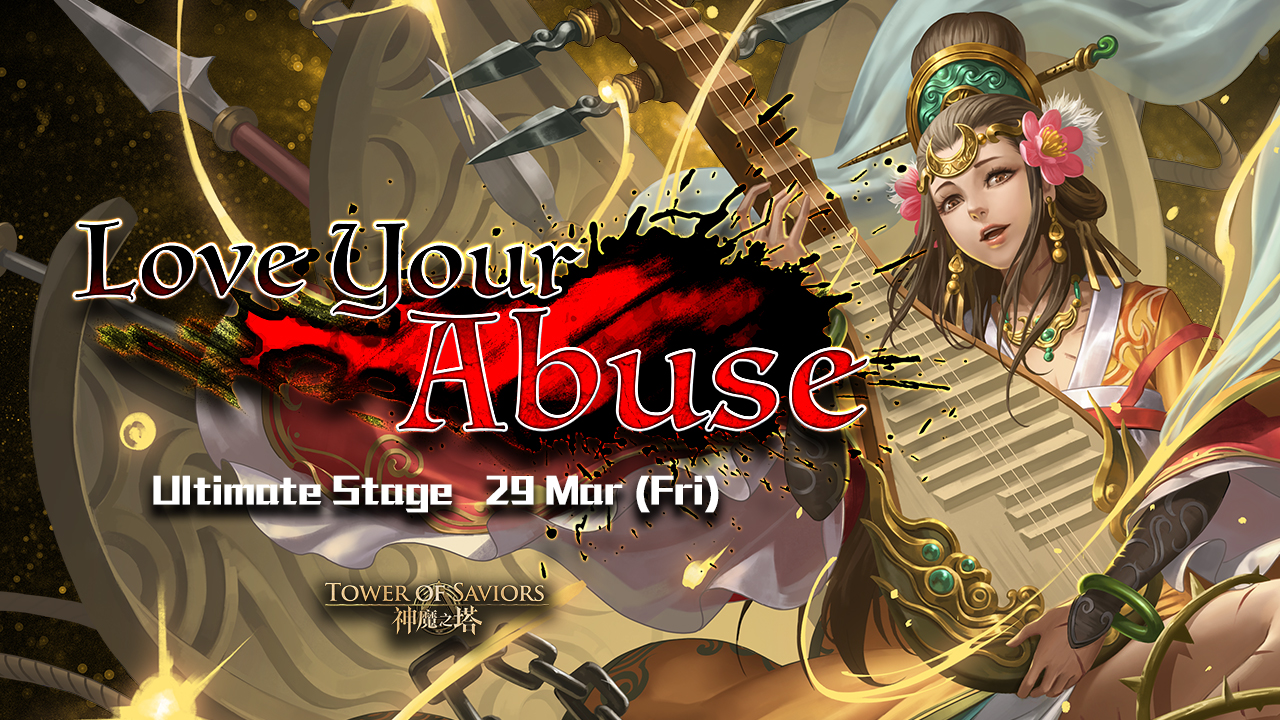 “Voluntary Victim – Wang Zhaojun” will set up the ultimate stage “Love Your Abuse”  at 22:00 (GMT+8), 29 Mar (Fri)! She will be joining hands with “The Untamed Fang – Zhurong” & “Simple-minded Gentry – Meng Huo” to have a dead fight with Summoners!

During the 1st phase, 10 fixed positions will be burned.  Every time when a burned position is touched, 20% of Summoner’s HP will be deducted. The enemy will only receive Damage when all present Dark Runestones are dissolved (dissolving Dark Runestones is necessary and only the first batch is counted).\nThe more the enemy attacks, the more its Attack will greatly increase.  When it has attacked for a certain number of times, the enemy attacks twice a Round.

During the 2nd phase, CD of the enemy’s first attack will be 1. The enemy receives Damage only when 6 Combos are made (only the first batch of Runestones dissolved will be counted). 100% of Summoner‘s HP will be deducted when the enemy attacks (regardless of all Damage-reducing and Willpower Skills). 2 positions will be changed into Water Metasphere and Dark Metasphere respectively.  Runestones passing through the Metasphere will be changed into Runestones of that specific type (the Runestone held when moving Runestones are not counted). The enemy receives Damage only when 15 or more Water Runestones and 15 or more Dark Runestones are dissolved in the same Round. 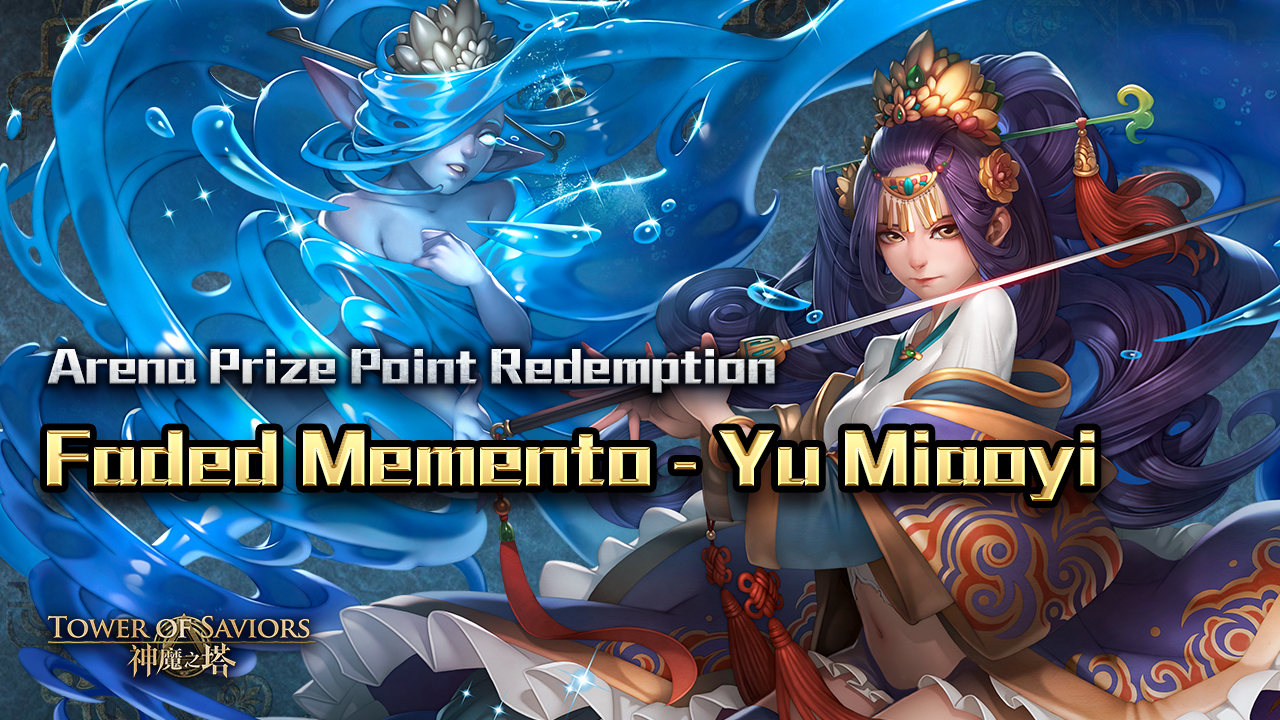 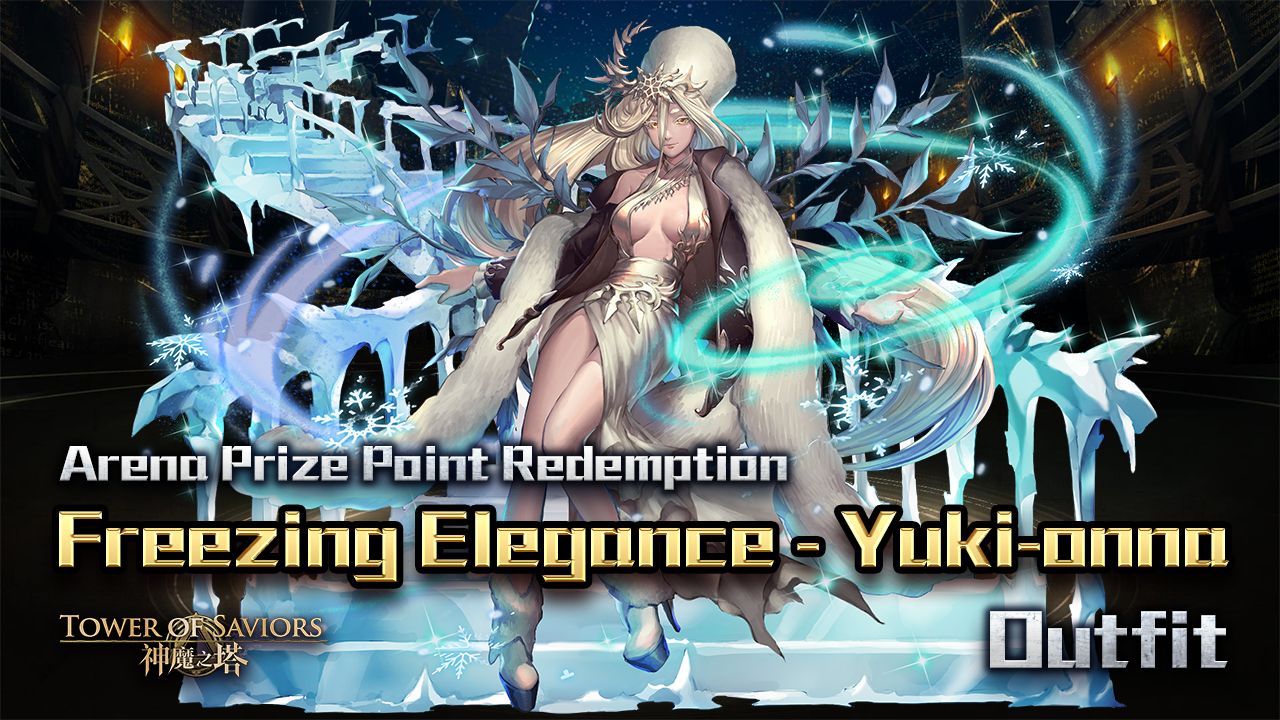 Turn the columns of Runestones below 2 Humans into Enchanted Water Human Runestones.  For 2 Rounds, turn all enemies’ Attributes into Fire.

The demo introduces “Score for Monesis” in the 10th Seal as a battle stage. “Origin of All Sins – Eve” will lead demon members to bring overwhelming attacks with her skills.