Into the last week of the crossover event, “Winter Anthem – Snow Miku” will be bringing you “The Snowy Night We Met” the Coliseum Event! In addition, the VR “Chinese Gods” is about to ascend to the top tier through “Supreme Reckoning”! 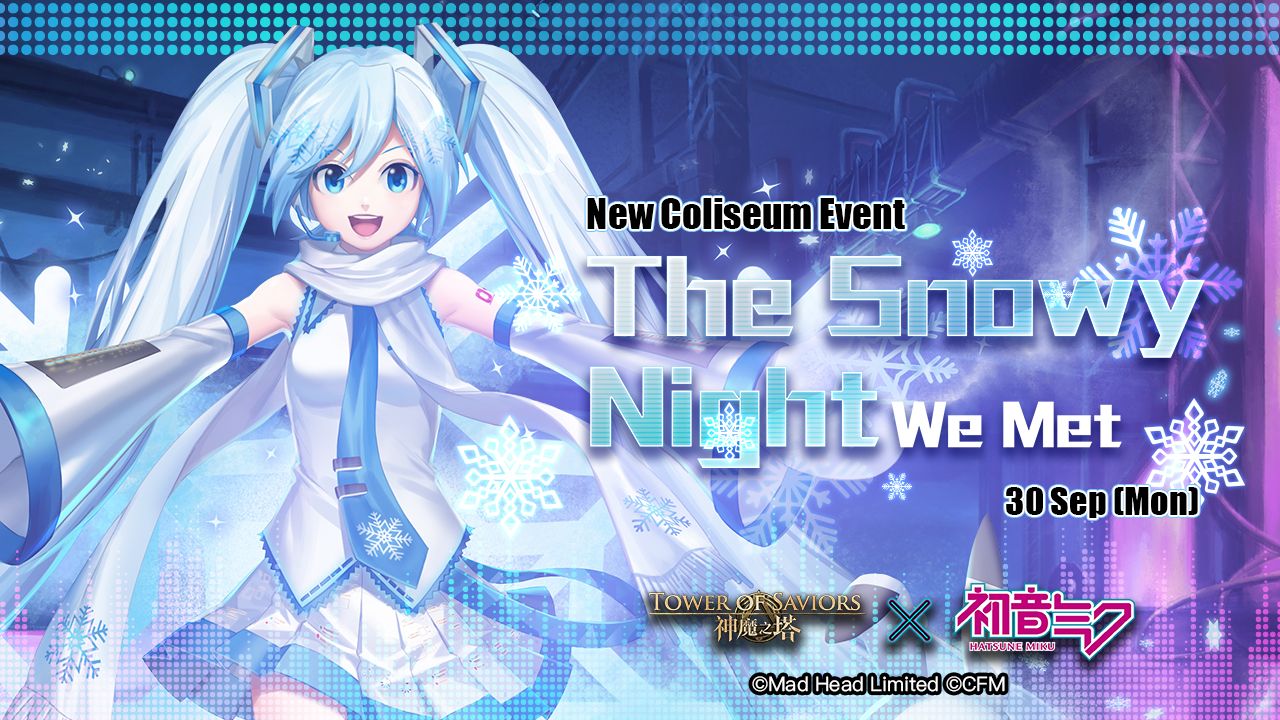 Coliseum stage “As Pure As Snow” will be available starting from 30 Sep (Mon). The pure and true “Winter Anthem – Snow Miku” has prepared you with loads of Treasure Ticket. If you’re lucky enough to run into her, you’ll get to have the tickets!

The pure and true “Snow Miku” will be the raiding monster in Coliseum stage “As Pure As Snow”, boosting all “Virtual Singers” crossover character with CD recovery and attack bonus!

Bringing “Virtual Singers”, “Mech Western Beasts”, “Mech Mythological Beasts” or “Mechanical Life” characters into battle will grant you Treasure Ticket bonus. Each monster of the above (repeated monsters/Ally don’t count) can bring 20% bonus points to you! 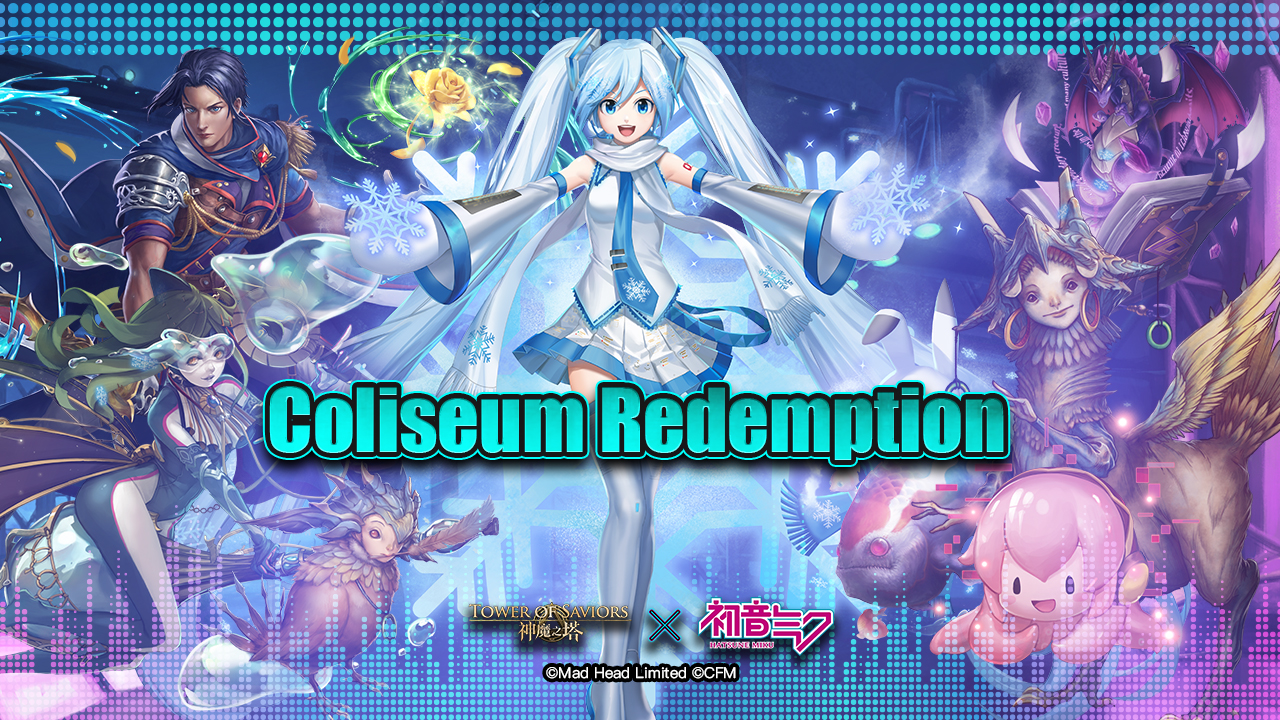 30 points of Stamina will be consumed for entering the Advanced Stage in Coliseum once (the Basic one costs 15). Defeat the enemies to earn coupons for redeeming rare materials, including “Harpy”, “Gleaming Cyan Carp”, “Winter Anthem – Snow Miku” and etc! During the event period, challenge the coliseum event 15 times or more and you’ll be rewarded with “Aqua Essence Soulstone” x1! Nevertheless, Daily Discounted Treasure is added into this Coliseum event. Different daily limited items can be redeemed by your redemption coupon! 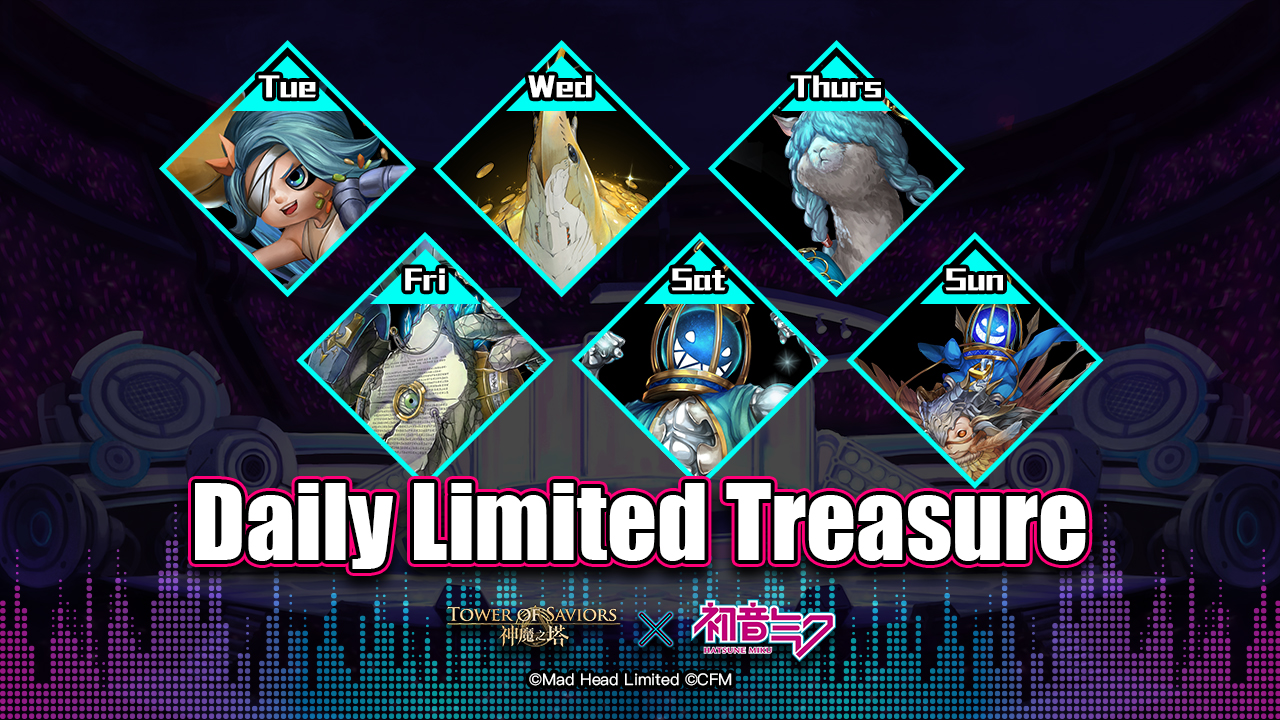 In 6 CD, the water Machina “Winter Anthem – Snow Miku” can activate “Magic of Snowy Crystals”: Explode all Frozen Runestones; The Monster’s Attack becomes 1; Attack bonus +39% for each Combo made. The Skill stays in play until no more than 3 Combos are made. 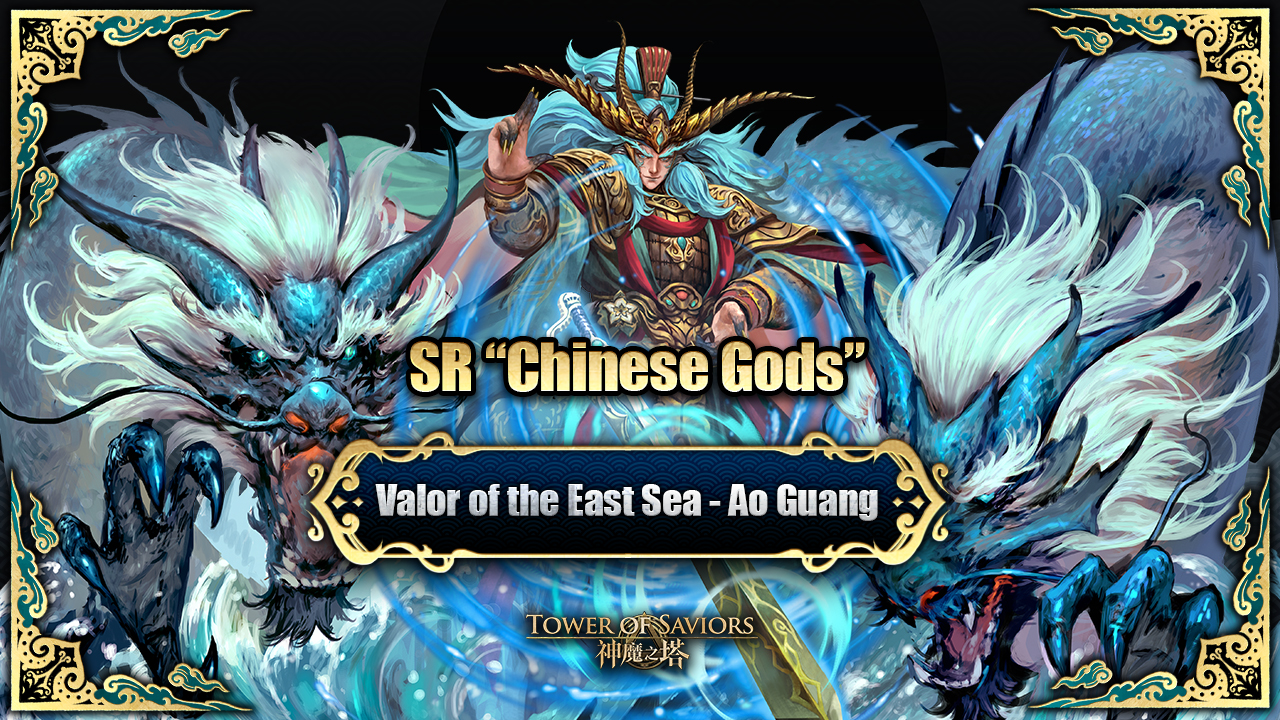 The Leader Skill of “Valor of the East Sea – Ao Guang” is described as the following: 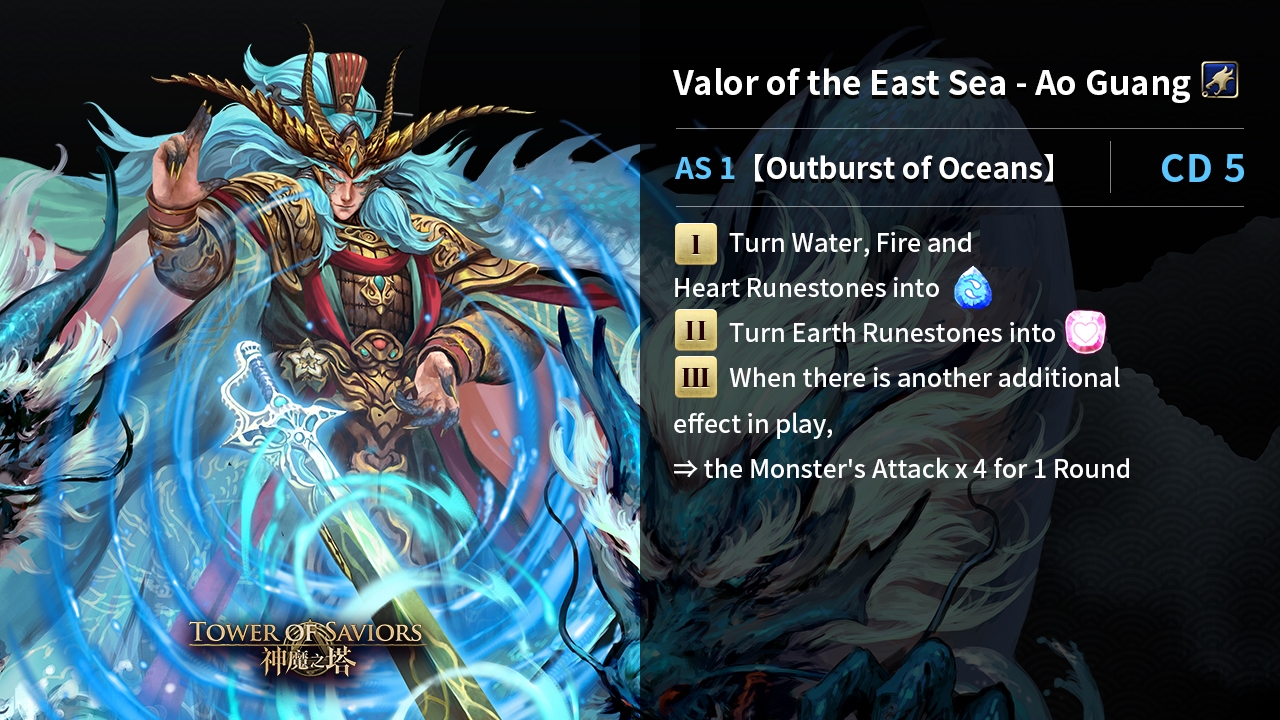 For Active Skill 2, “Valor of the East Sea – Ao Guang” can activate the skill in 6 CD: Explode all Runestones to generate Dragon Runestones; Extend Runestone-moving time to 10 seconds for 1 Round.

The Leader Skill “Inferno Field – EX” of “Heavenly Fire Wheels – Nezha” is described as the following:

No attacks could be launched by other Members, adding 2x of their attack to the Monster; Launch an extra Attack of as much as 30x the Monster’s Attack each Round, regardless of Attribute and Defense\n(dissolving Runestones is necessary).

For Skill 2 “Samadhi Flames”: Deal 3 million Fire Damage to all enemies, regardless of Defense and Enchanted Runestone Shield; Damage received -90% for 1 Round.

“Smite of Warhammer – Bull King” has the leader skill “Commander of Forests”: 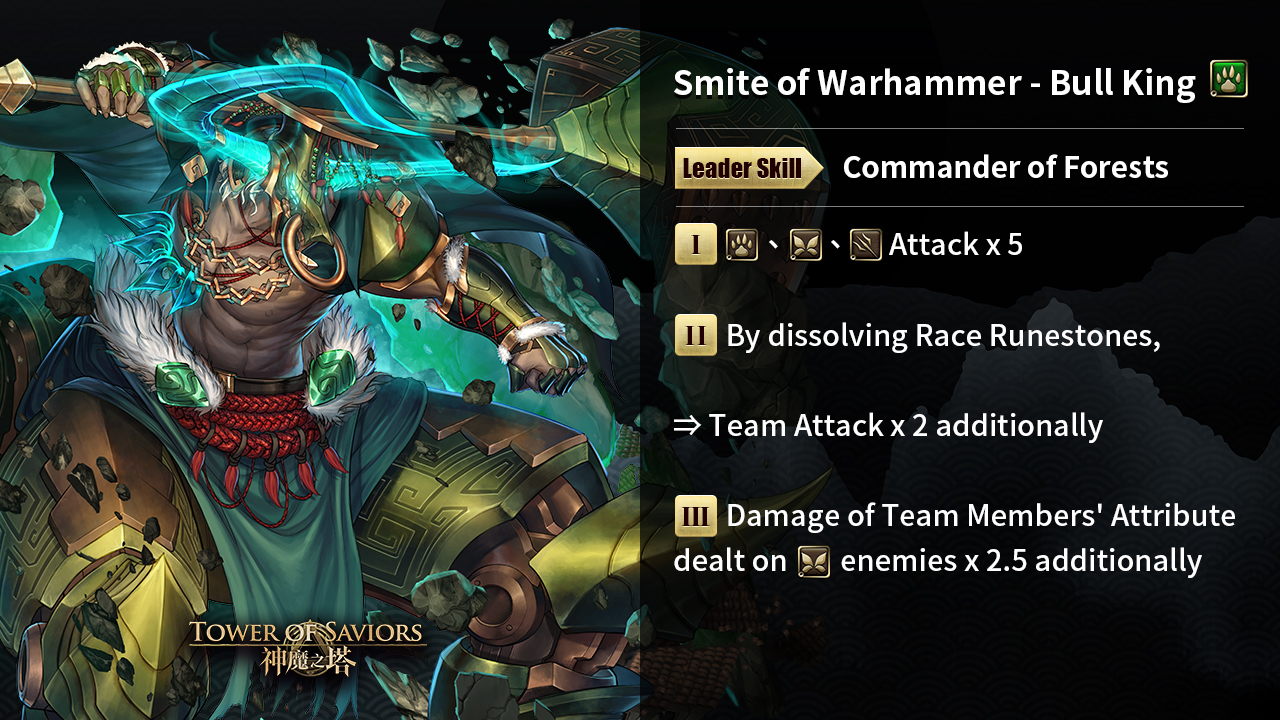 “Smite of Warhammer – Bull King” can activate “Outburst of Nature” upon 5 CD:

“Bull King” can activate another skill “Force of Supremacy” upon 6 CD: 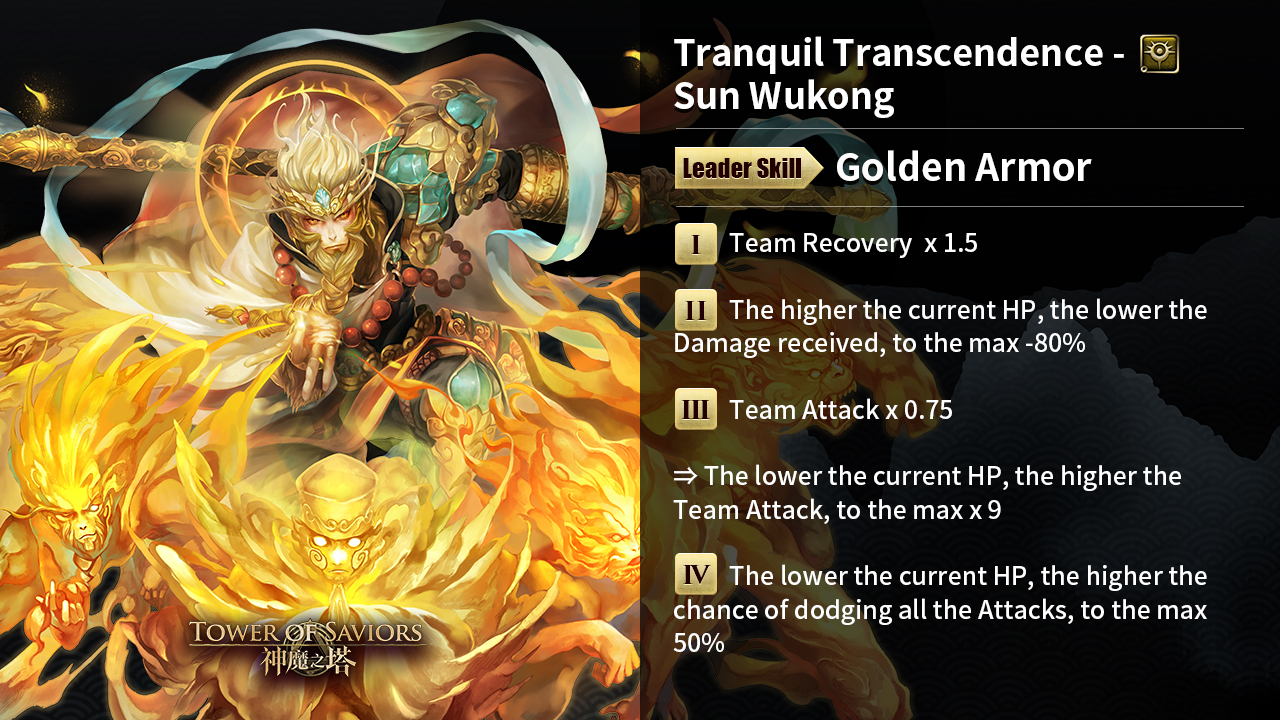 When using “Mahayana Punisher – Tang Sanzang” as Leader & Ally, “Tranquil Transcendence – Sun Wukong” will launch 5 extra attacks of each Attribute when it attacks!

For 3 Rounds:
I. Reduce the Defense of all enemies to 0.
II. Team Attack x 1.5.
III. Turn the first 5 Runestones touched while moving into Enchanted God Runestones.

“Sun Wukong” can activate another skill “Stone into Gold” upon 6 CD: 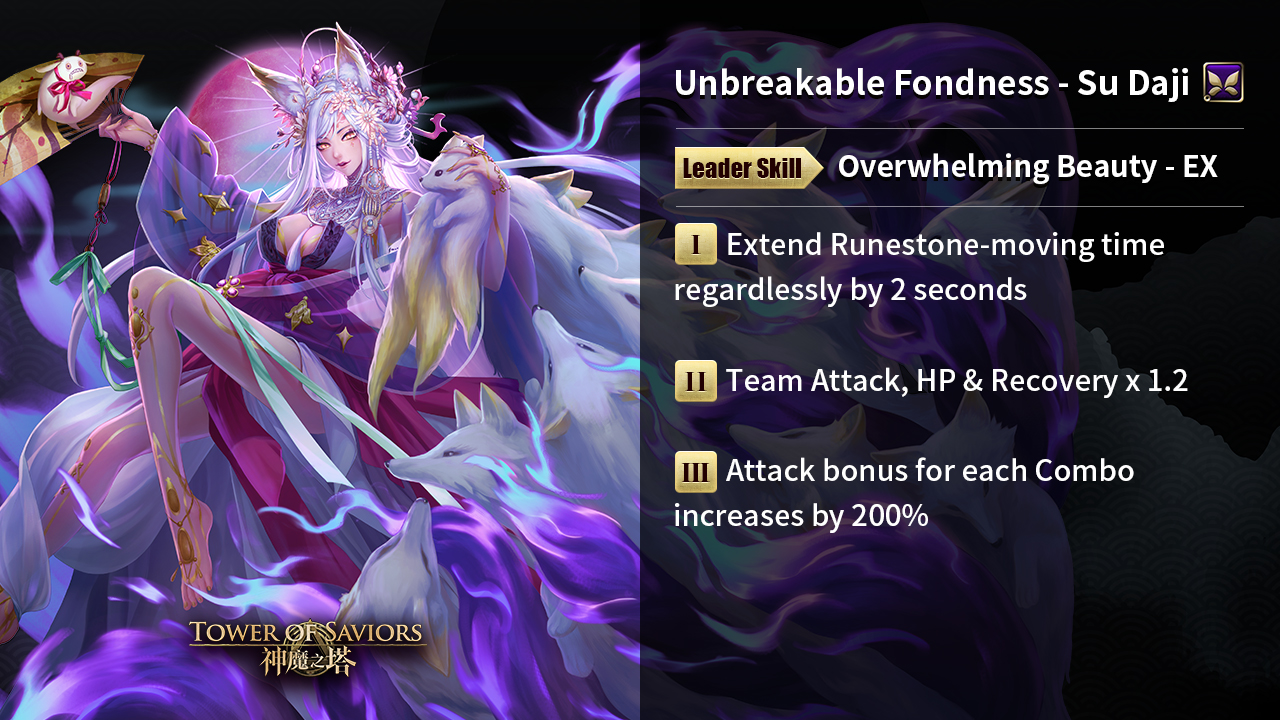 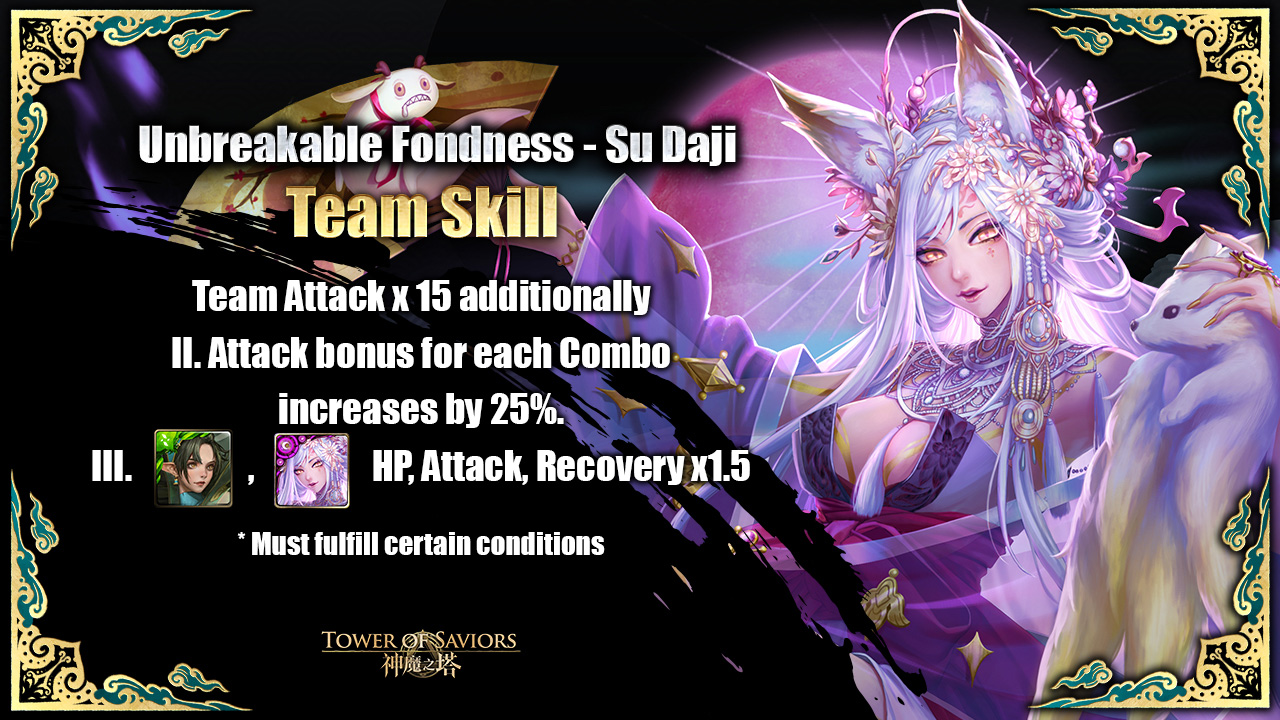 When both the Leader and Ally are “Unbreakable Fondness – Su Daji”, Team Attack x 15 additionally!

When the Leader or Ally is “Unbreakable Fondness – Su Daji”, Attack bonus for each Combo increases by 25%. 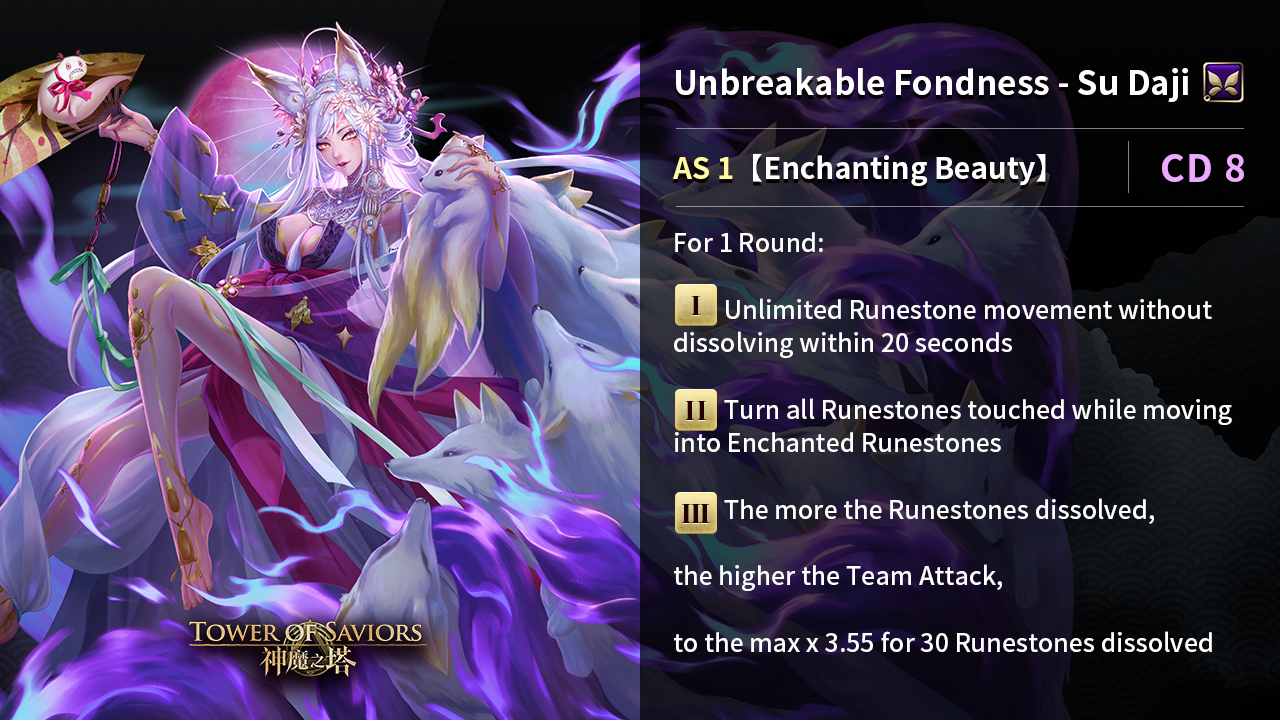 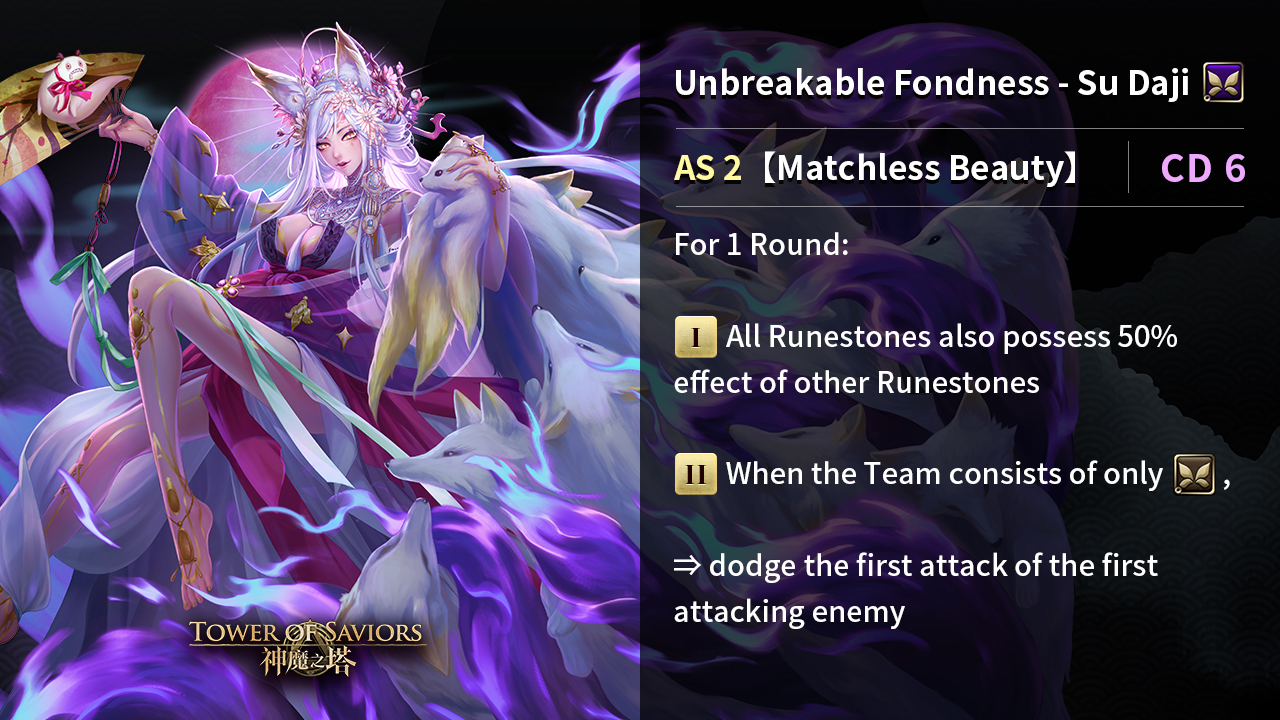 For 1 Round: I. All Runestones also possess 50% effect of other Runestones.

Starting from next Thursday, “Bionic Immortal – Li Tieguai” & “Warrior of Aggression – Nezha” will bring you a new round of challenge “40 Riddles in Autumn Wind”! Complete the stage for specific times and you’ll be rewarded with SR material “Shedu” and gold title!

Please note that every character you’ve used (including Leader, Members & Ally) will be added into forbidden list, which cannot be re-used again in the challenge. Think twice before when you team up with your members!!

Coliseum event of “Winter Anthem – Snow Miku” will be coming soon! The demo showcases her new skill in the Machina team!

SR Chinese Gods will be available at 1pm, 7 Oct (Mon)! Come to experience their strong power!!

**All relevant events & rewards of “Hatsune Miku” are Hong Kong, Macau, Taiwan, Singapore, Malaysia and Thailand exclusive only. Other regions will not be able to join the event.