Being one of the “Homunculi” in “FULLMETAL ALCHEMIST BROTHERHOOD”, “Sloth” will come to the Realm of TOS as a Crossover character in Version 18.4. The Coliseum event “With Agility & Strength” begins on 24 Mar (Tue), putting Summoners’ abilities to the test! Another Homunculus, “Fuhrer King Bradley”, will appear in the Ultimate Stage “Authority of Fuhrer” also in the same week. Those who do not support the leader of Amestris will get a death sentence! 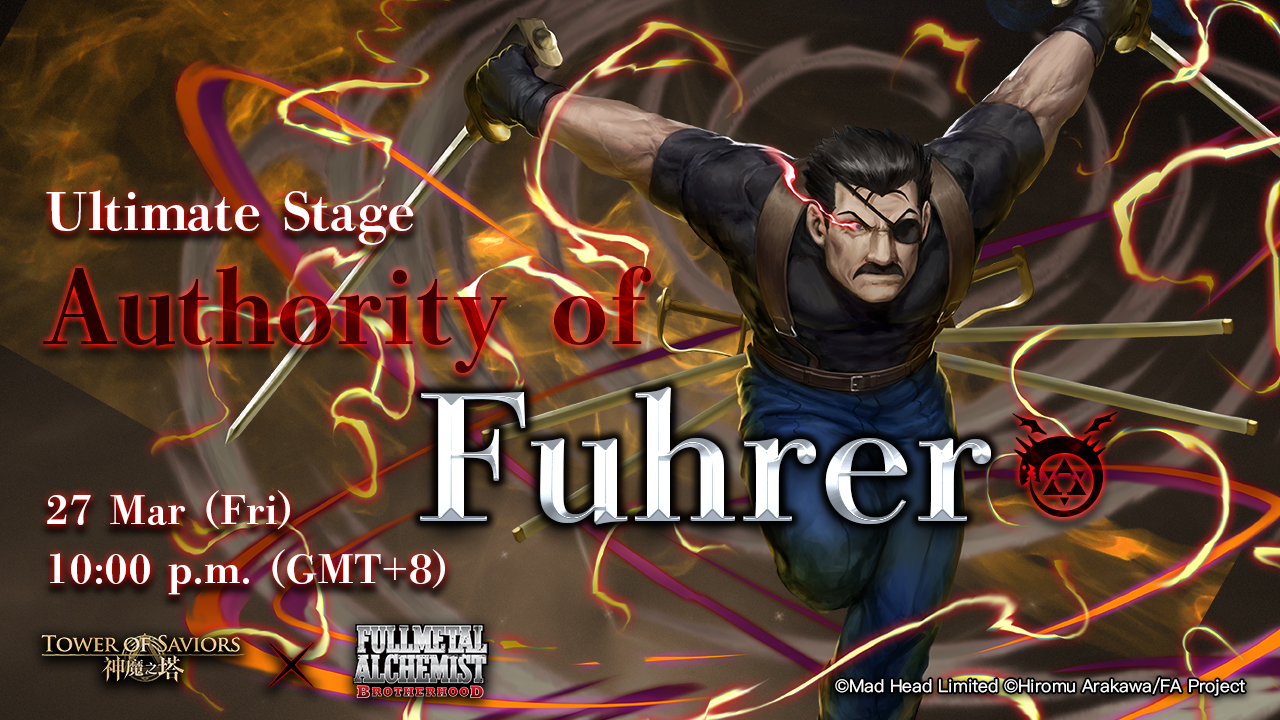 King Bradley will set up the Ultimate Stage “Authority of Fuhrer” starting from 10 p.m. on 27 Mar (Fri). As the leader of the military, King Bradley is a man of physique and might. You must survive in the face of his traps!

Having “The Ultimate Eye”, the Fire Human “Fuhrer King Bradley” can activate the Skill every 6 Rounds. The power of the Eye grants him a 2.5x Attack increment and the ability to disregard enemies’ defense. If 9 Runestones at fixed positions are dissolved, Team Attack will increase additionally by 1.5x, and those Runestones will become Enchanted at the end of the Round. To keep the Skill in play, you just have to dissolve any of the 9 Runestones at the fixed positions in the first batch. So easy!

Though lazy, “Sloth” has immense strength and surprising agility as the event name suggests. He will wait in the stage “Speed Killing” for an ambush on Summoners. You must defeat him to get more Treasure Tickets! 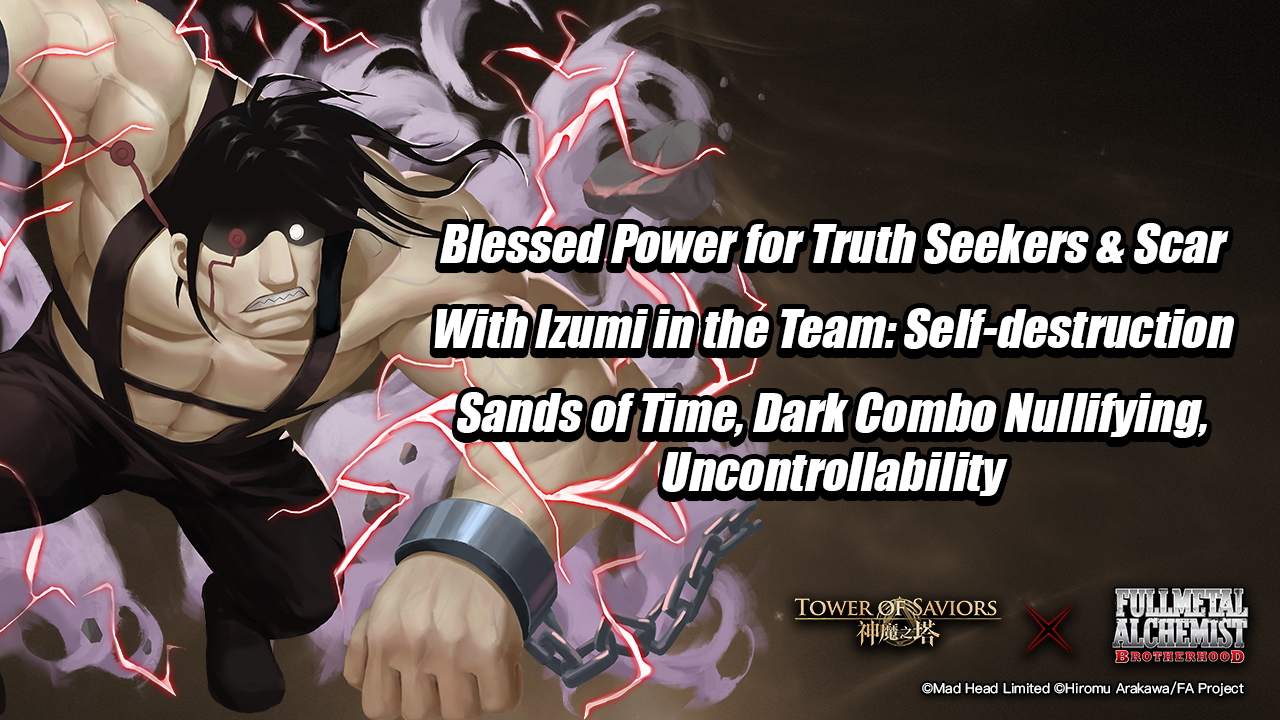 In the Advanced Stage, “Scar” and “Truth Seekers” are boosted if they meet “Sloth”. Their Skill CDs will become 0, and their Attack will be doubled for 7 Rounds. But it’s even better to have “Izumi Curtis” in the team, as “Sloth” will immediately deduct 100% of his own HP and leave the battle. As for his Boss Skills, the uncontrollable “Sloth” will reduce Runestone-moving time to 2 seconds; his number of attacks will increase with the number of Dark Combos dissolved. Can you make an attack within the 2-second time constraint? 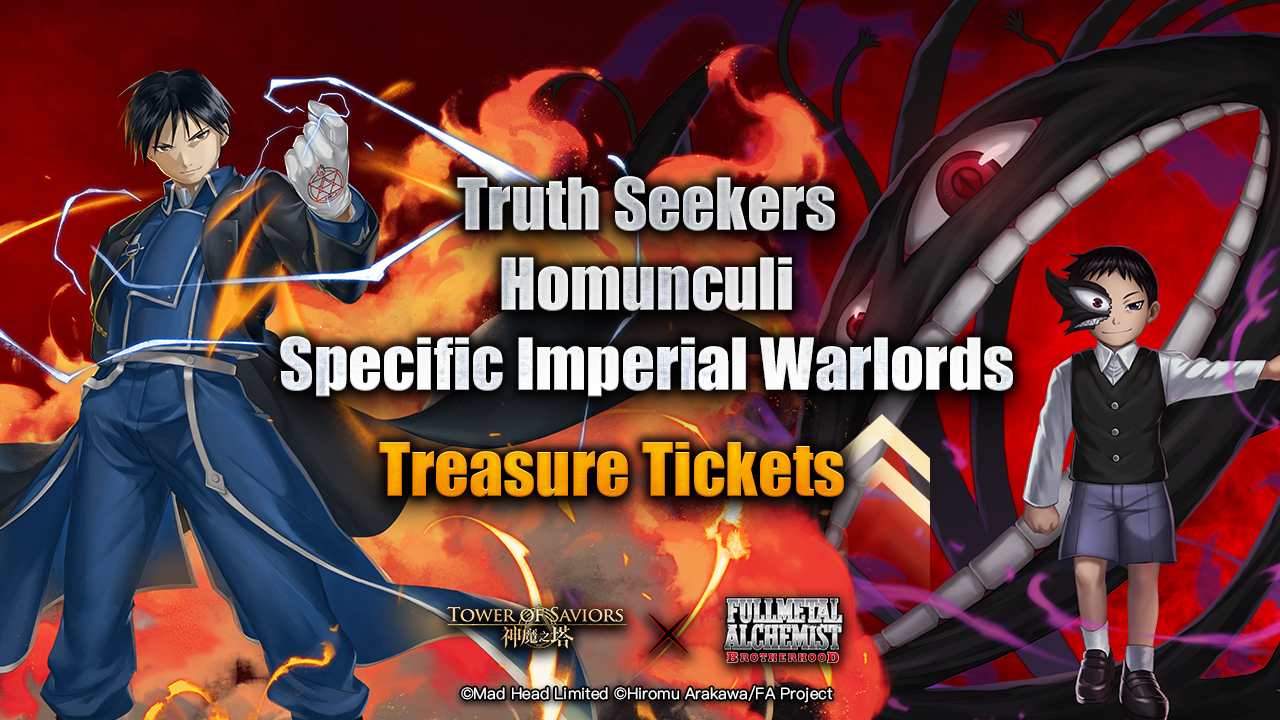 When you fight in the Coliseum, specific characters in the team can bring you special honor. A 20% bonus of Tickets will be given for every one of them (identical characters and the Ally are not counted): PR “Yuan Shao”, “Lu Xun”, “Lü Bu”, “Diaochan”, “Huang Zhong”, “Truth Seekers”, and other “Homunculi” including “Sloth”, “Pride” and “Fuhrer King Bradley”.

The Advanced Stage of the Coliseum requires 30 points of Stamina, while the Basic one requires only 15. It’s time to defeat your enemies, earn some Tickets, and redeem them for various rewards! Treasures such as “Harpy”, “Jade Rabbit” and the Mythical “Sloth” are available for exchange. By completing the Stage 15 times, you can also get the animated outfit of “Alphonse Elric”! 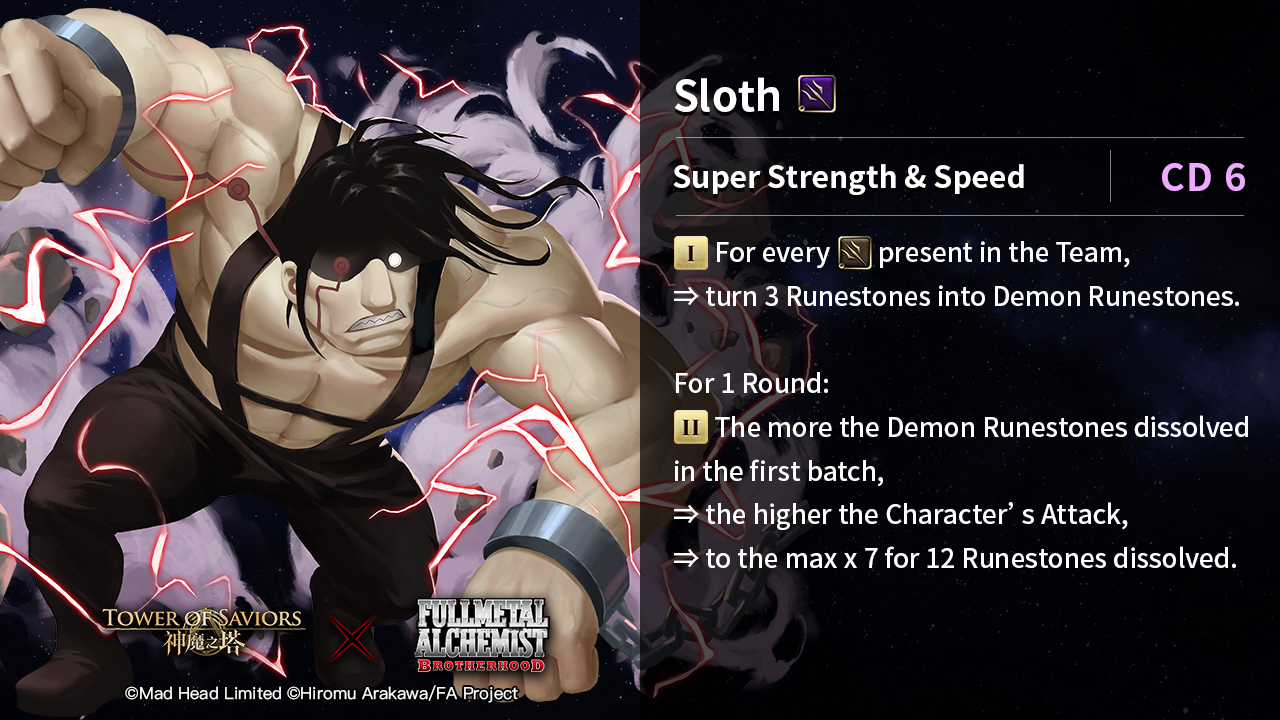 Possessing “Super Strength & Speed” (CD 6), the Dark Demon “Sloth” is able to turn Demon Runestones, and increase his own Attack with the number of Demon Runestones dissolved in the first batch, to the max x 7. The indolent giant wants to end the battle as quickly as possible with his all-out attack!

On 23 Mar, a new area of “Research Center” will appear in the realm. “Ether Fission – Aristotle” & “Orbits of Coelestium – Copernicus ” are preparing a challenge “Road to Hope” for Summoners. The stage consists of Normal and Hard difficulty. Every completion will grant you “Blood Crystal” x1. When you meet the raiding characters “Gluttony” or “Envy” 3 times, Extra stage will be unlocked. By completing the Extra stage, you’ll be rewarded with “Blood Crystal” x 3(num).

After getting “Blood Crystal”, you can redeem various items with it in Trade Fortress, including “Harpy”, “Silver Madhead”, the animated outfit of “Edward Elric” and “Van Hohenheim”!

The forgotten alchemist “Van Hohenheim” will arrive at the Trade Fortress in the Realm on 23 Mar (Mon). Make sure you save enough “Blood Crystal” to have him in your team!

“Van Hohenheim”, the father of the Elric Brothers, is a Light Human with unfathomable power. He can activate his Skill “Souls of the Stone” (CD 9) to turn all Runestones into Enchanted Runestones. The first batch of Runestones can be dissolved by aligning 2 or more of them to greatly increase the Combo count for the Round. If your enemy is a God or Demon, the alchemist will also give you an additional 3x attack boost!

One more Homunculus “Envy” will have its debut on 23 Mar (Mon) in the bi-weekly Stage “Uncontrollable Envy”. Every 6 Rounds, the Earth Beast can trigger its Active Skill “Twinge of Envy” to convert a column of Enchanted Earth Beast Runestones and strengthen its own Attack. As the embodiment of envy, the Homunculus never hides his emotions. If a neighboring member has a higher Attack, “Envy” will offset it with its own Attack x 6. If both neighboring members are less strong than “Envy”, it will have its own Attack increased by 2x. To provoke its extreme jealousy, it’s better to put a stronger member beside “Envy”! 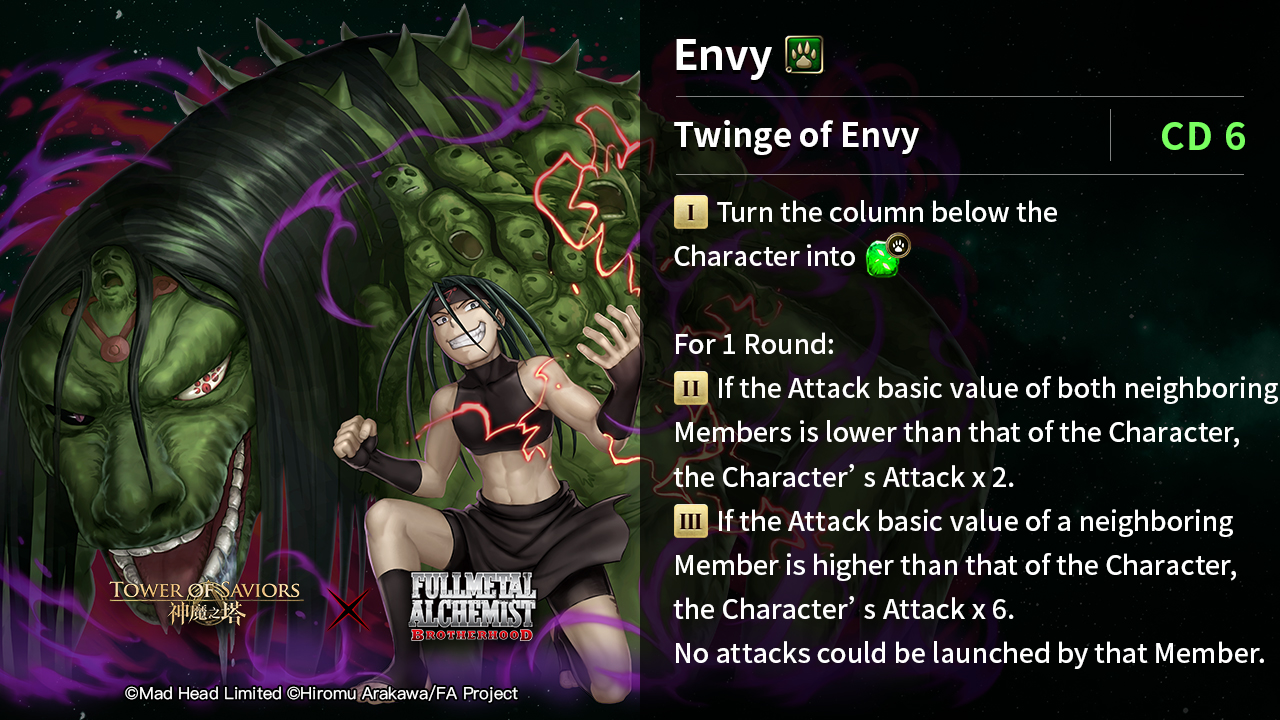 In the bi-weekly Stages of “Homunculi”, “Lust” will occasionally turn up in an extra wave. If you’re desperate to see her all the time, find her in an Elite Stage!

“Fuhrer King Bradley” will soon reveal himself in the Ultimate Stage “Authority of Fuhrer” at 10 p.m. on 27 Mar (Fri). With “The Ultimate Eye”, let’s see how he keeps turning Enchanted Runestones and increasing his Attack in the video!

“Van Hohenheim”, the forgotten alchemist, will stay in the Realm for a while from 23 Mar (Mon). You can trade “Blood Crystal” for the character at the Trade Fortress. He can apply his skill “Souls of the Stone” for special effects in terms of boosting Attack as well as turning and dissolving Runestones. The video definitely shows his power in the battle!