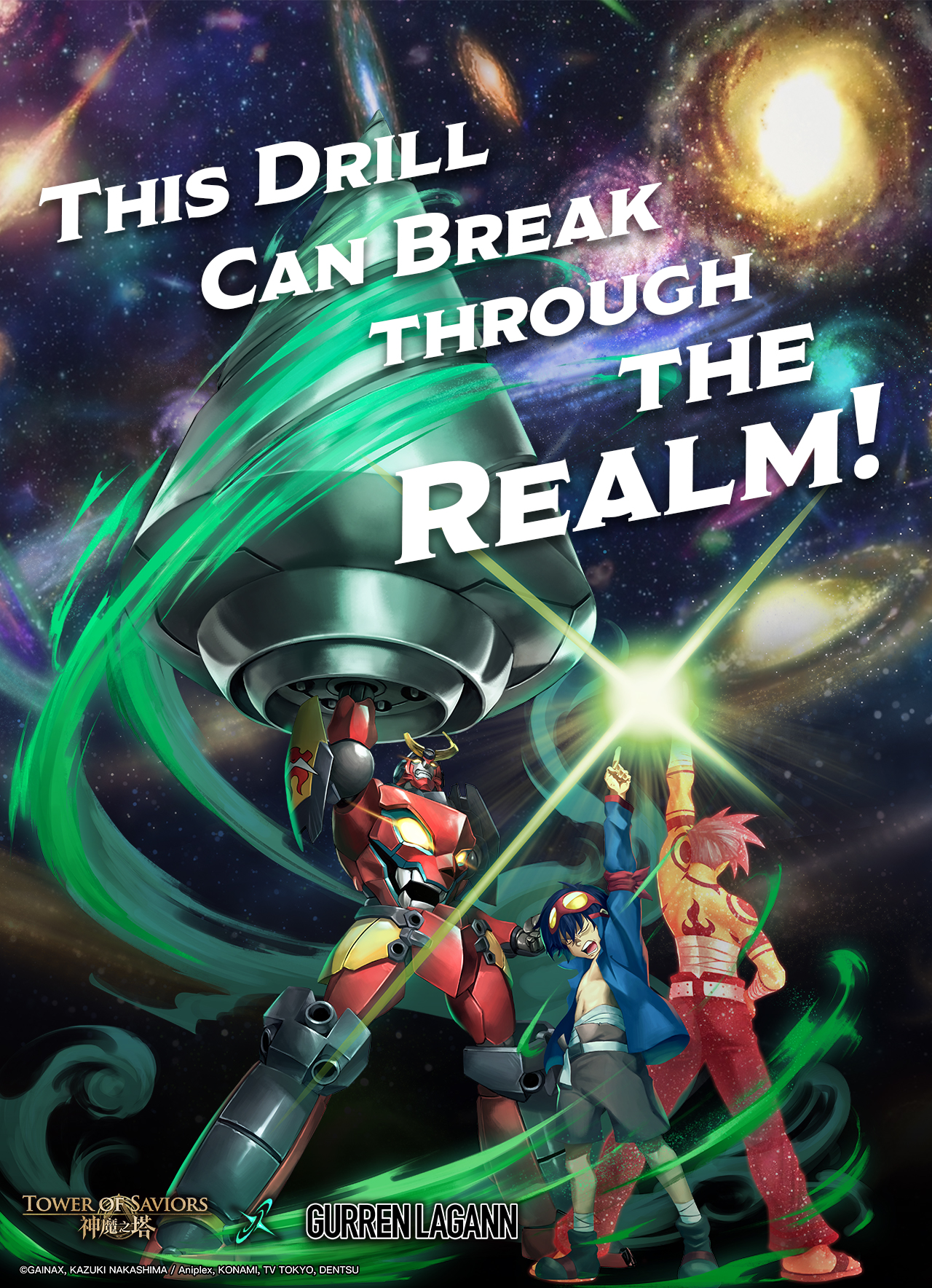 Version 19.1 of Tower of Saviors will be released on 8 Jun (Mon), featuring a crossover with a famous anime “Tengen Toppa Gurren Lagann”! During the crossover, “General of Spiral King – Guame the Immovable” will be the first ultimate stage boss to have a fierce fight with Summoners. 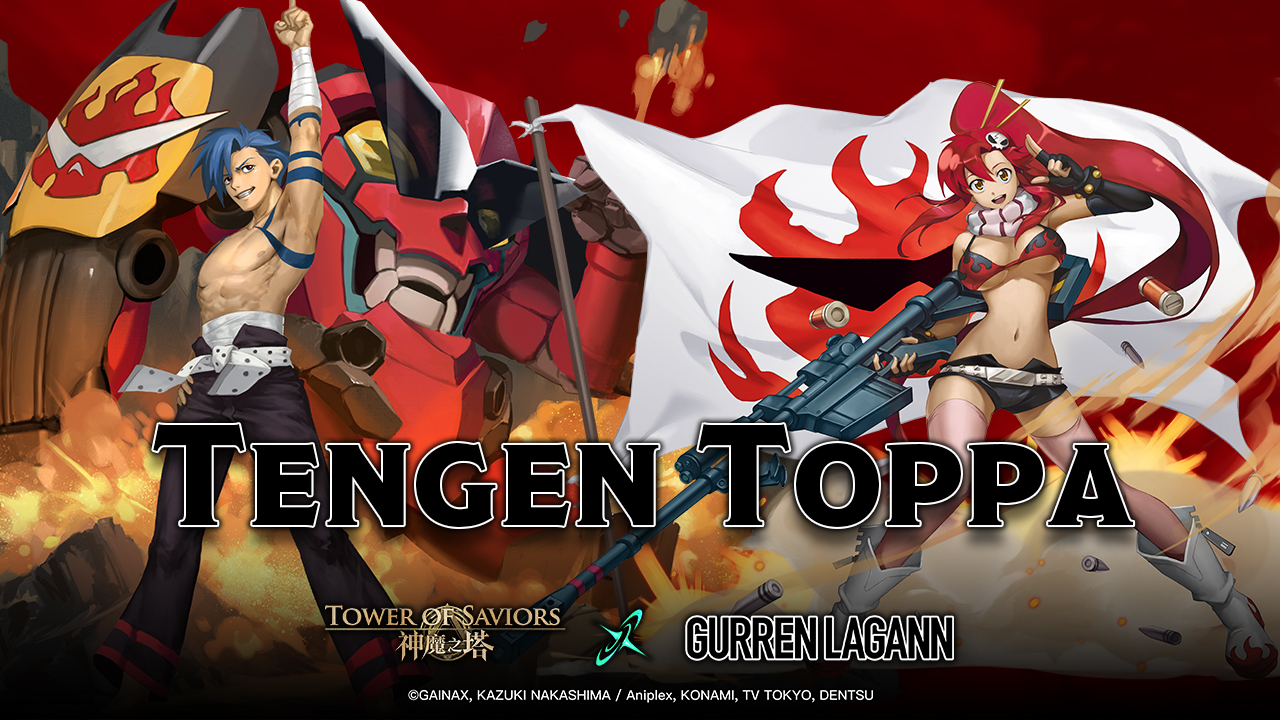 In version 19.1, popular characters of “Tengen Toppa Gurren Lagann” are going to join the realm, including the rare “Simon & Lagann”, “Kamina & Gurren” and “Yoko”. During battles, “Simon” and “Kamina” can further be combined into “Gurren Lagann”. You can summon the characters of “Tengen Toppa” in the Diamond Seal “Core Drill”. We’ll introduce the skills of comrades of “Simon” and “Kamina” to you. 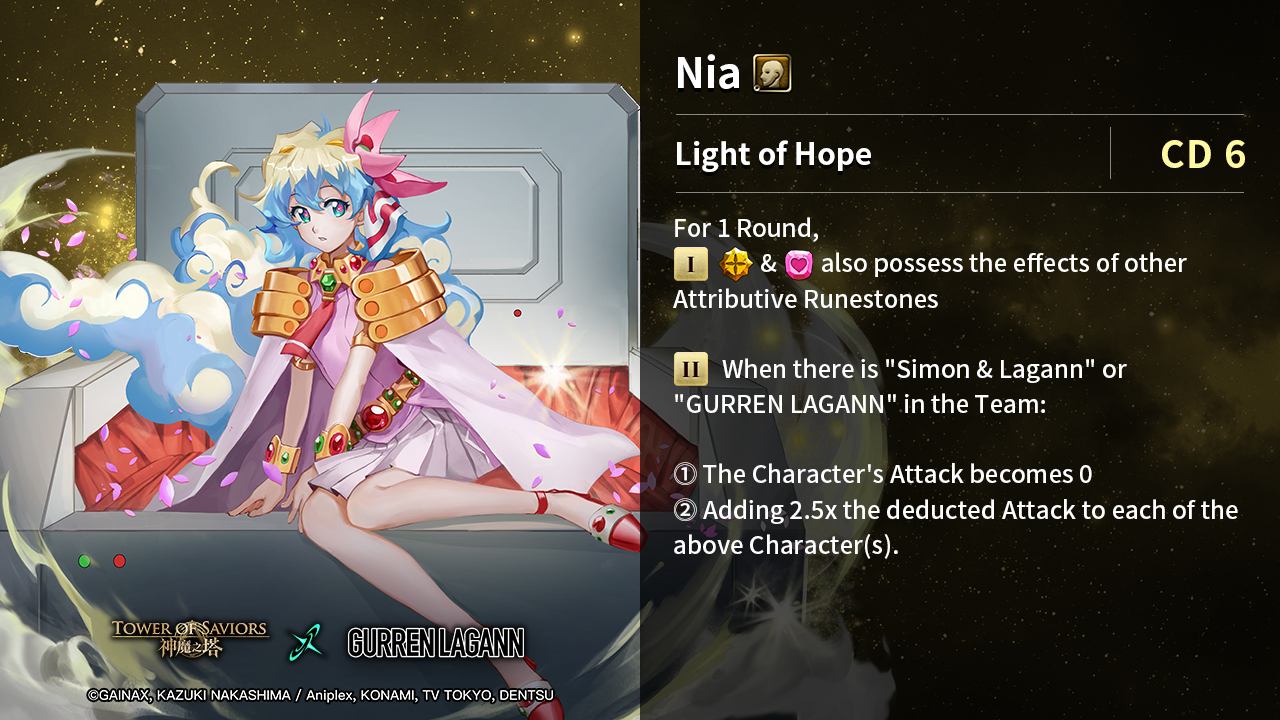 Nia, who’s the daughter of “Spiral King – Lordgenome” and has been supporting “Simon”, can activate her active skill “Light of Hope” to boost team attack with Runestone effects possession. If the team has “Simon & Lagann” or “Gurren Lagann”, the character’s Attack becomes 0, adding 2.5x the deducted Attack to the Attack of each of the member above, so as to become their best helper in the fight. 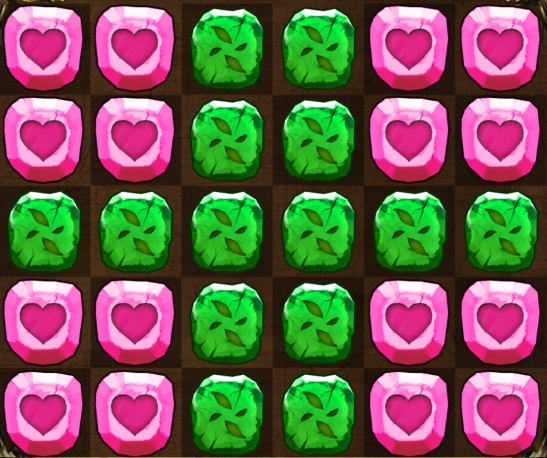 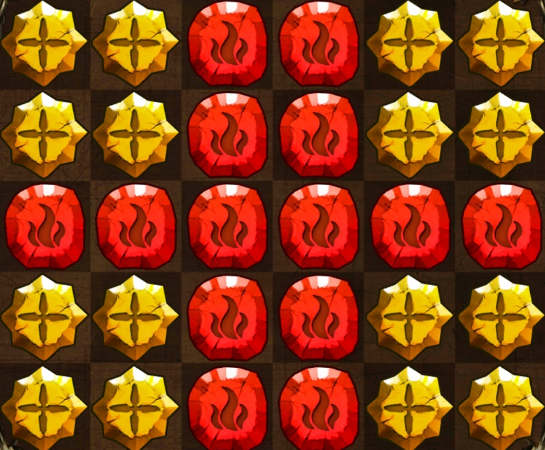 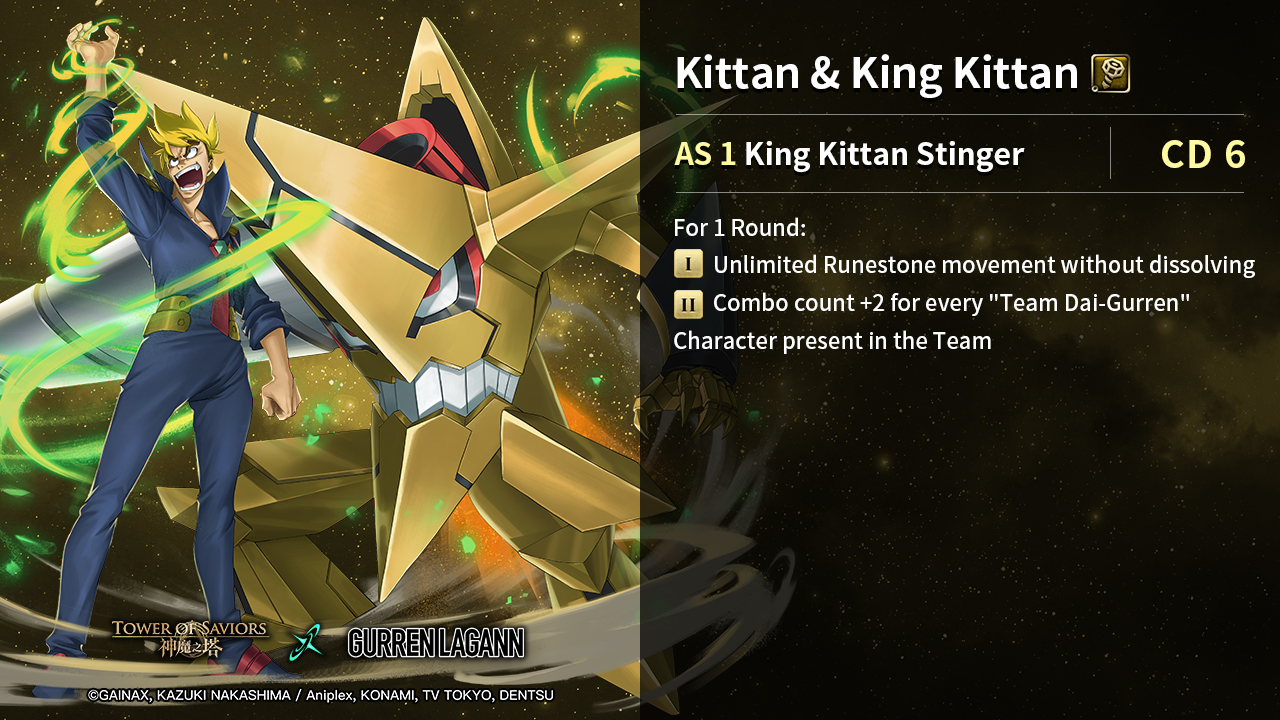 “Kittan & King Kittan” have dual active skills “King Kittan Stinger” and “King Kittan Giga Drill Break”, which can be activated depending on the situation.

For 1 Round, unlimited Runestone movement without dissolving. If the team has a “Team Dai-Gurren” Character, +2 Combos, to the max + 12 Combos for 6 members.

This can be activated only when Craft Apparatus is full and it’ll consume 100% of its power. For 1 Round, Character’s Attack x10 to initiate a heavy blow against the enemy. However, at the end of the Round, the Character enters a dying state for 2 Rounds.

“Viral” from the beastmen army excels at “Dual Swordsmanship”:

Turn all Runestones into Enchanted Runestones. For 1 Round, dodge Human, Machina or Demon enemy attack once. When the dodge of the enemy’s attack is successful, Damage dealt on all enemies x 2.5 next Round.

Genius technician “Leeron” has the active skill “Machinery Mastery” that turns the column below the character into Enchanted Runestones. If the team has only Humans & Machinas, Fuel of Machinas +50%. When all “Machinas” in the Team have 100% Fuel, full HP recovery. If the leader is a character of “Team Dai-Gurren”, restore all “cracked” positions. 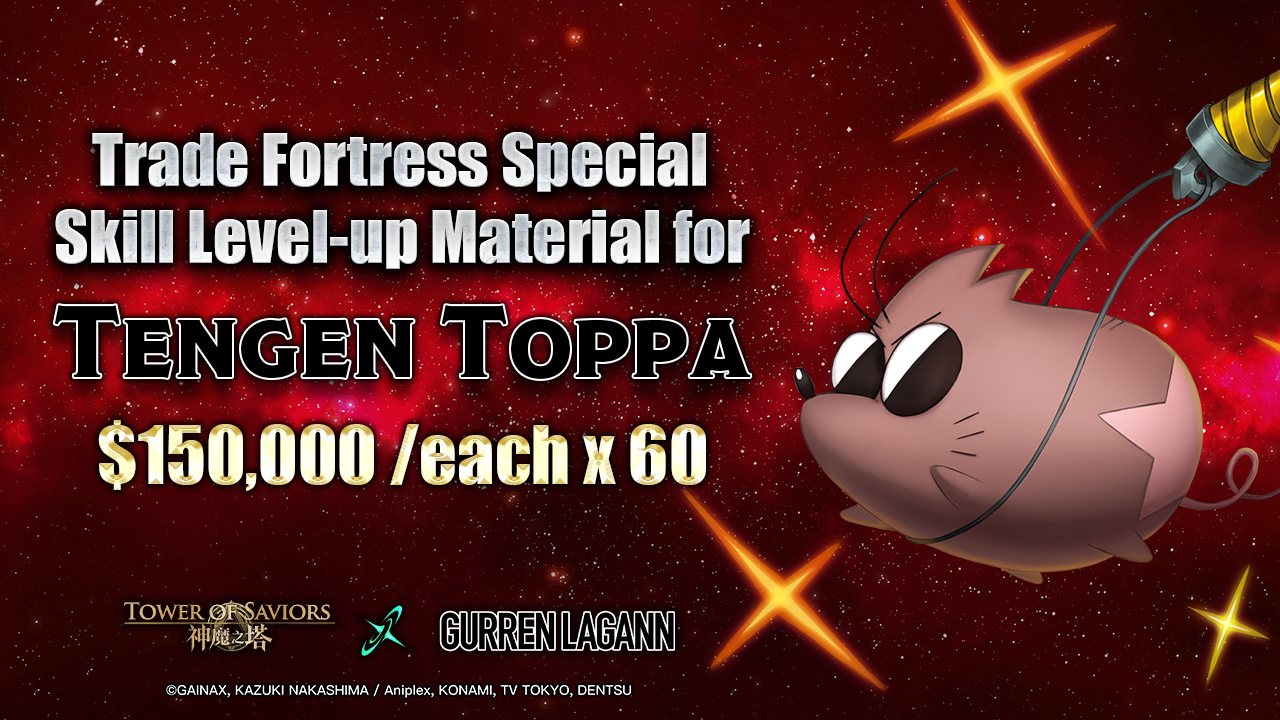 The skills of characters of “Tengen Toppa” can be levelled up by “Boota”, which will increase the accumulated skill rounds of a character by 600, while by 50 when used as leveling up the other characters. Upon version update, 60 “Boota” will be put on sale at Trade Fortress. 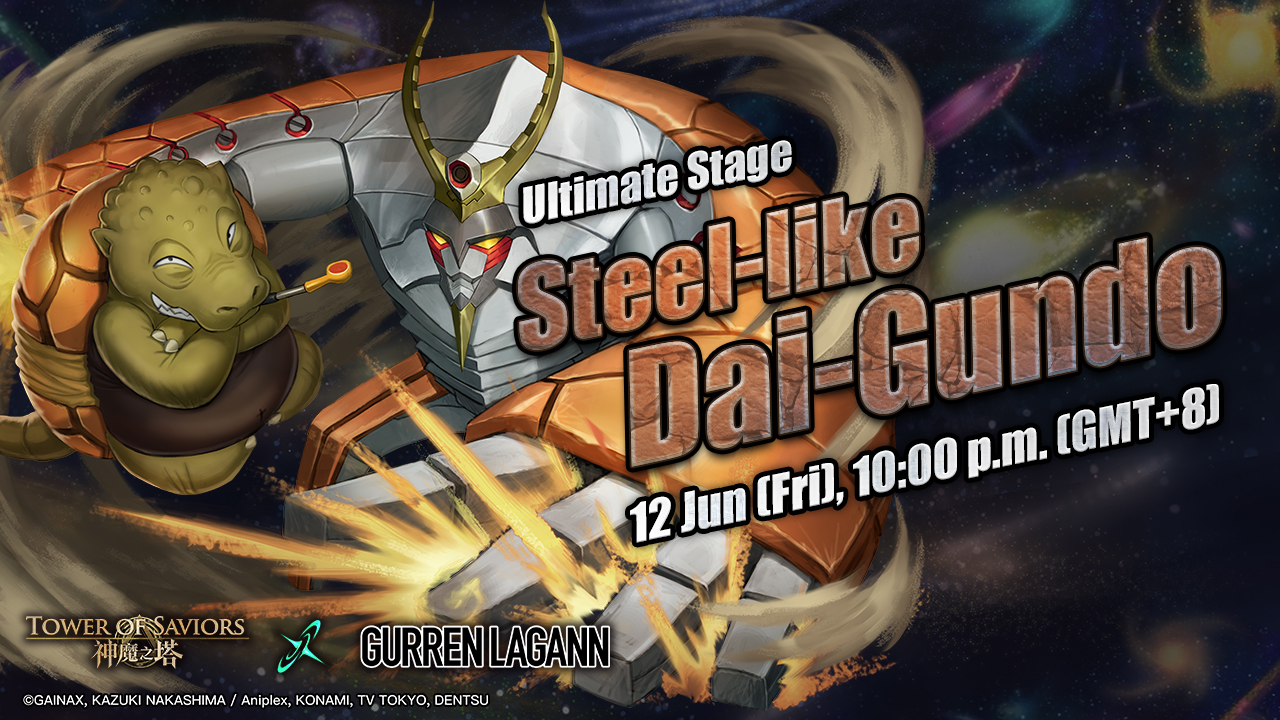 Guame the Immovable, the General of Spiral King, will debut in the ultimate stage “Steel-like Dai-Gundo” at 10pm, 12 Jun (Fri). As a leading character of the ultimate stage, Guame will go all out to live up to its name. 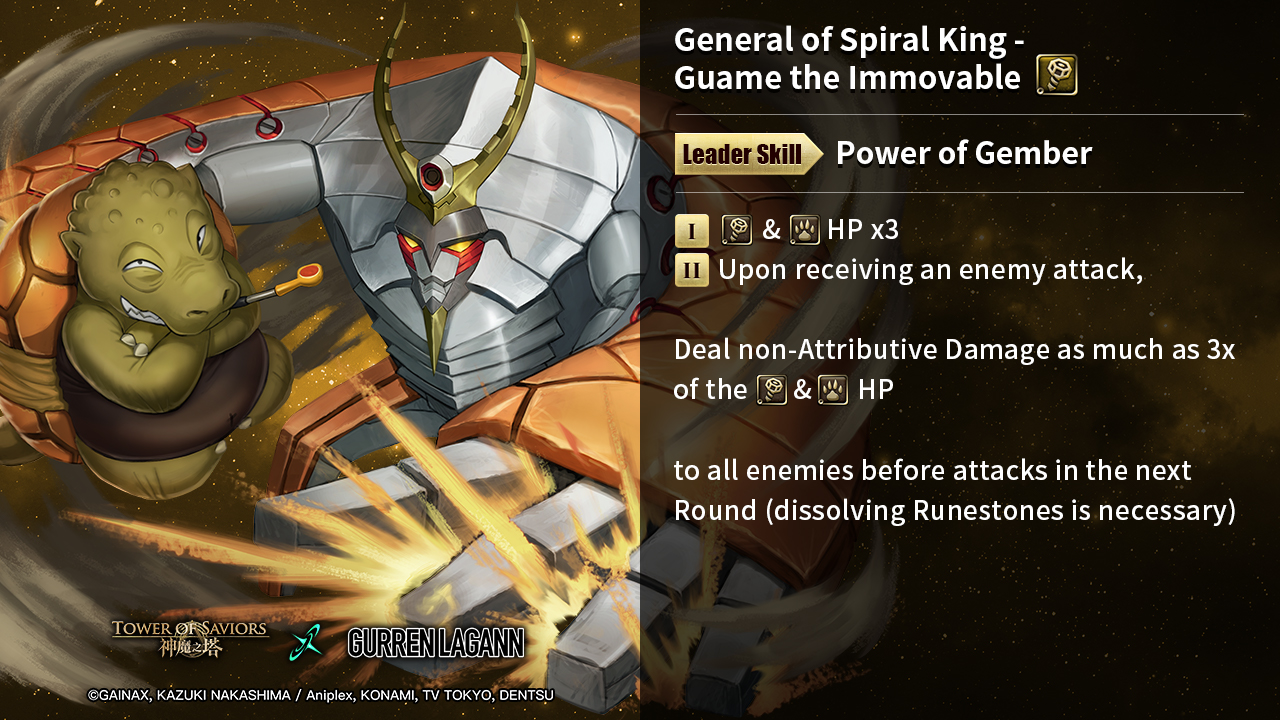 The Gunmen of “General of Spiral King – Guame the Immovable” has the leader skill “Power of Gember”:

“Machina” and “Beast” HP x3. Upon receiving an enemy attack, deal non-Attributive Damage as much as 3x of the “Machina” & “Beast” HP to all enemies before attacks in the next Round (dissolving Runestones is necessary). 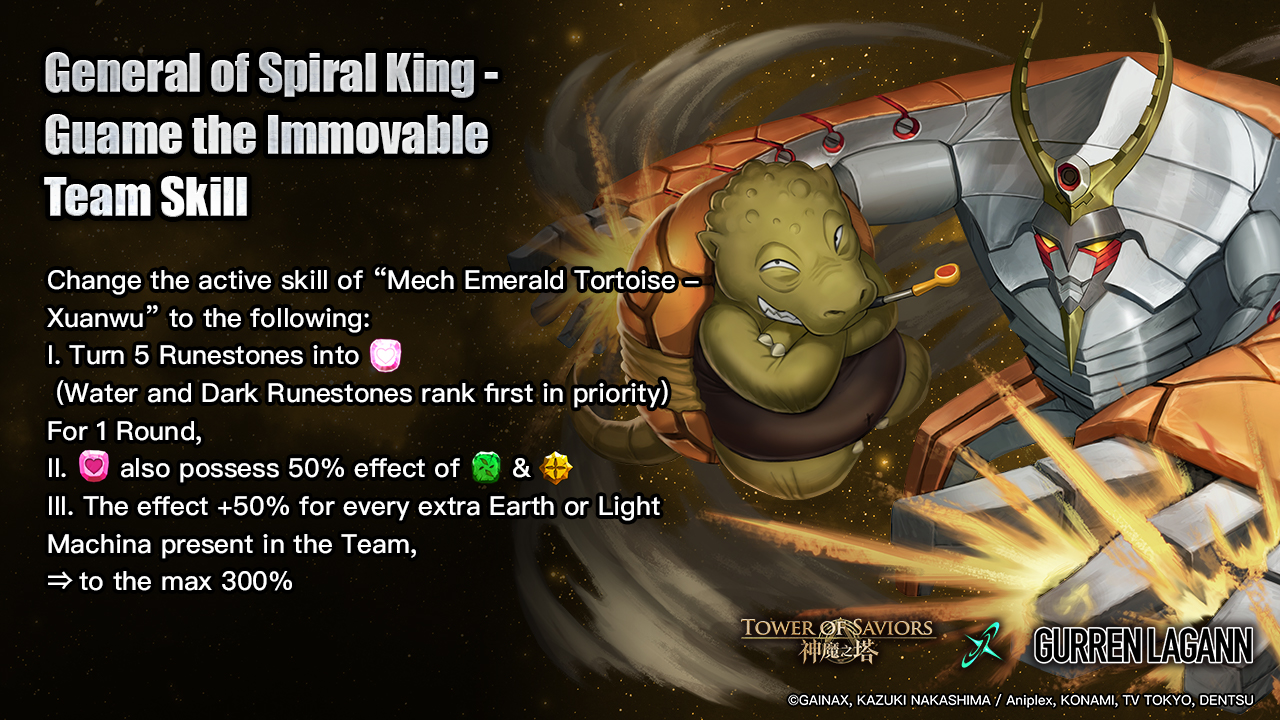 Light-attribute “General of Spiral King – Guame the Immovable” has the active skill “Gember Press” that explodes Runestones other than Light and Heart to generate random attributive Runestones; deals 100,000 Light damage to all enemies; for 1 Round, dissolve ≥6 Light or Heart Runestones to reduce 60% damage received.

“Thymilph the Crasher”, General of Spiral King, will be available in the bi-weekly stage on 8 Jun (Mon). Fire-attribute “Thymilph the Crasher” can activate “Condemn Blaze” that For 1 Round, the more the steps moved while moving Runestones, the higher the Machina & Beast Attack. If the Defense of all enemies are 0 upon Skill activation, the character launches an extra Fire attack once. 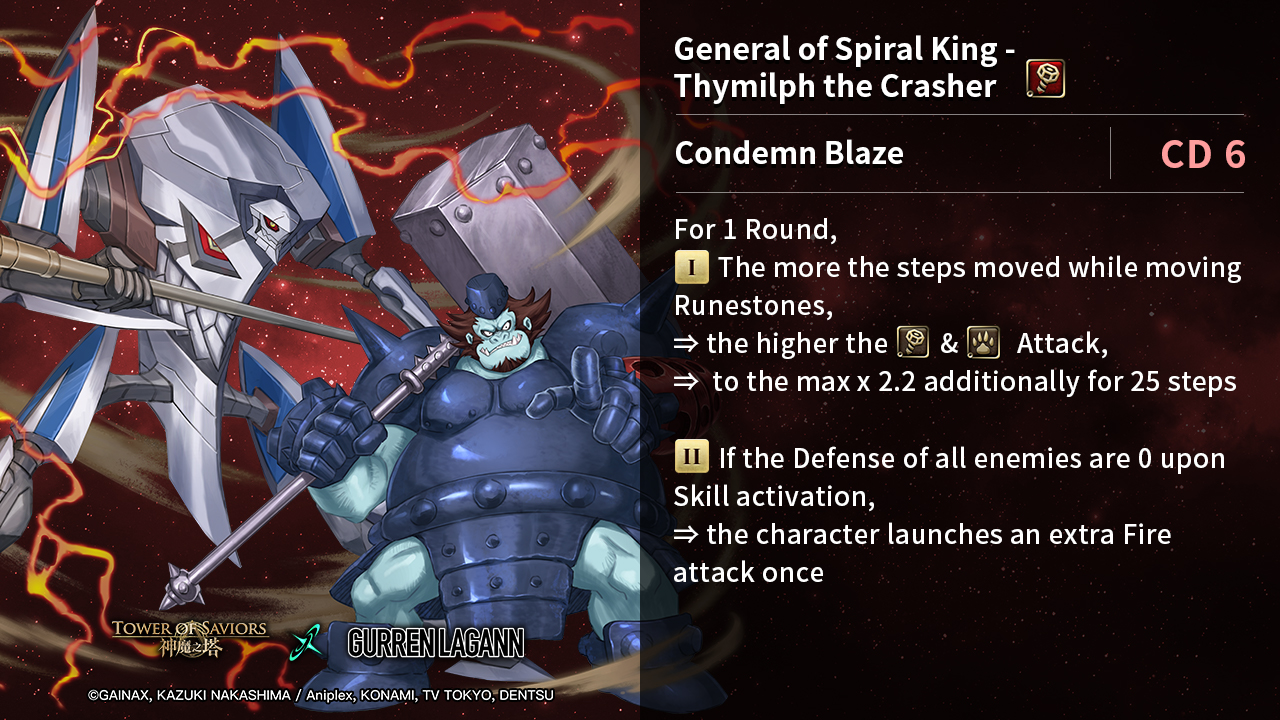