The brand new version 18.3 “Ancient Agonizing Annihilation” will be released on 20 Jan. Characters of Olden Trio are stepping into the realm. Conflicts among the three races will trigger a war! Meanwhile, “The Olden Stele” from “The Traveler’s Memories” is leading Summoners into the ancient past to witness the story of “Olden Trio”. Next Friday, “Amiable Caretaker – Lu Cun” will set up the ultimate stage “Behind the Dipper” at 10pm (GMT+8)! 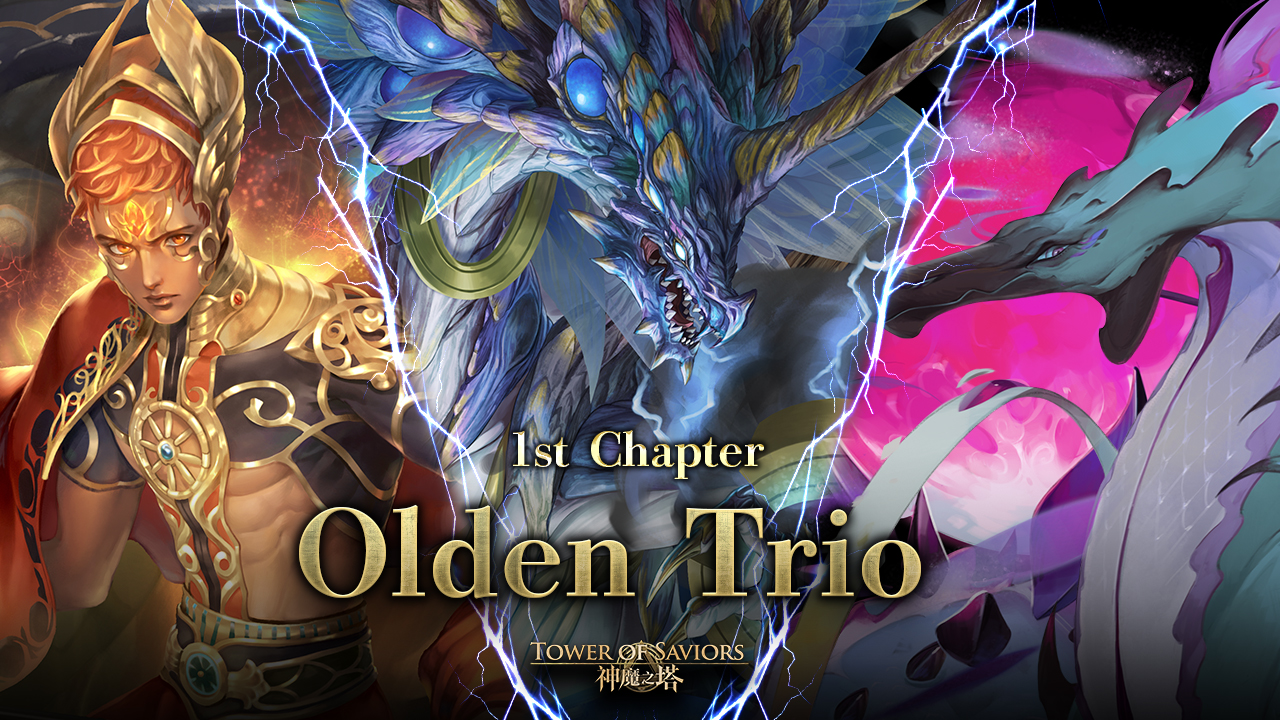 In ancient times, the strong extraterrestrial “Eldus” (Gods) came to the realm to take away their origin ── “Monesis” lying deep under the realm. “Eldus”, by all means, invaded the realm by force, jeopardizing the “Elemental Beast” clan living under the basin and “Runedragon” clan which resided on the high peak. These indigenous races were pulled into the edge of annihilation… 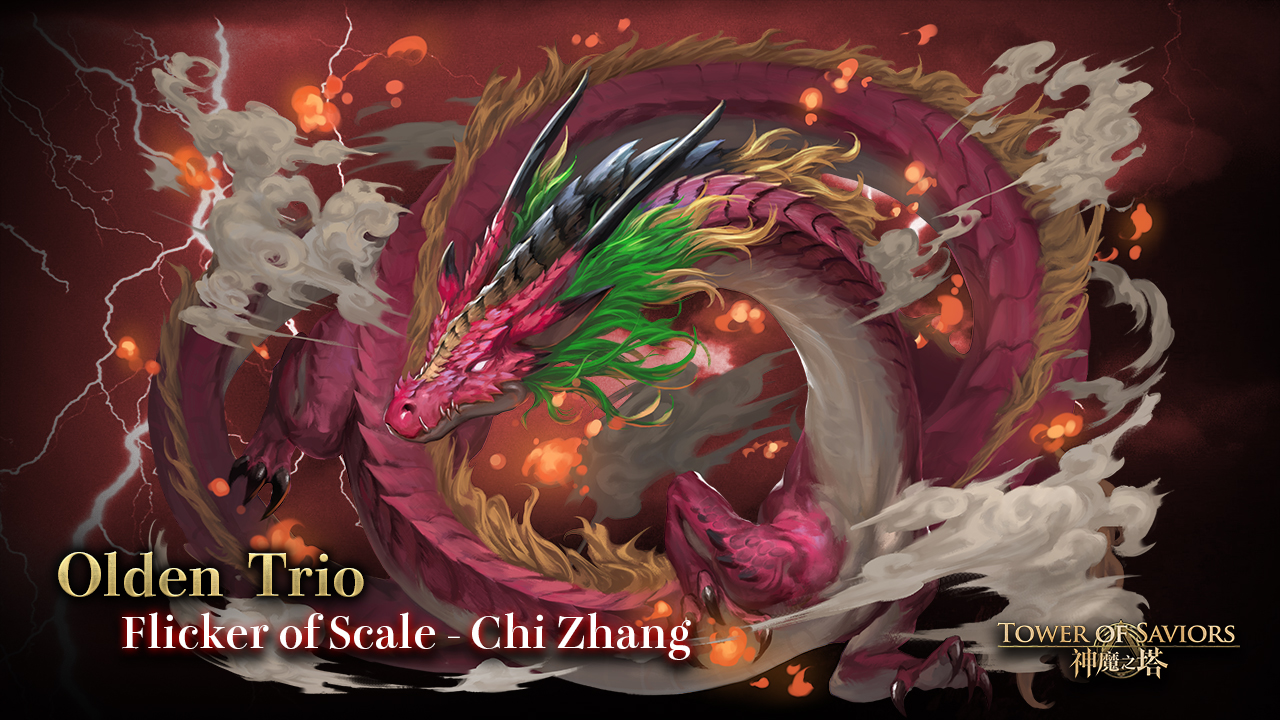 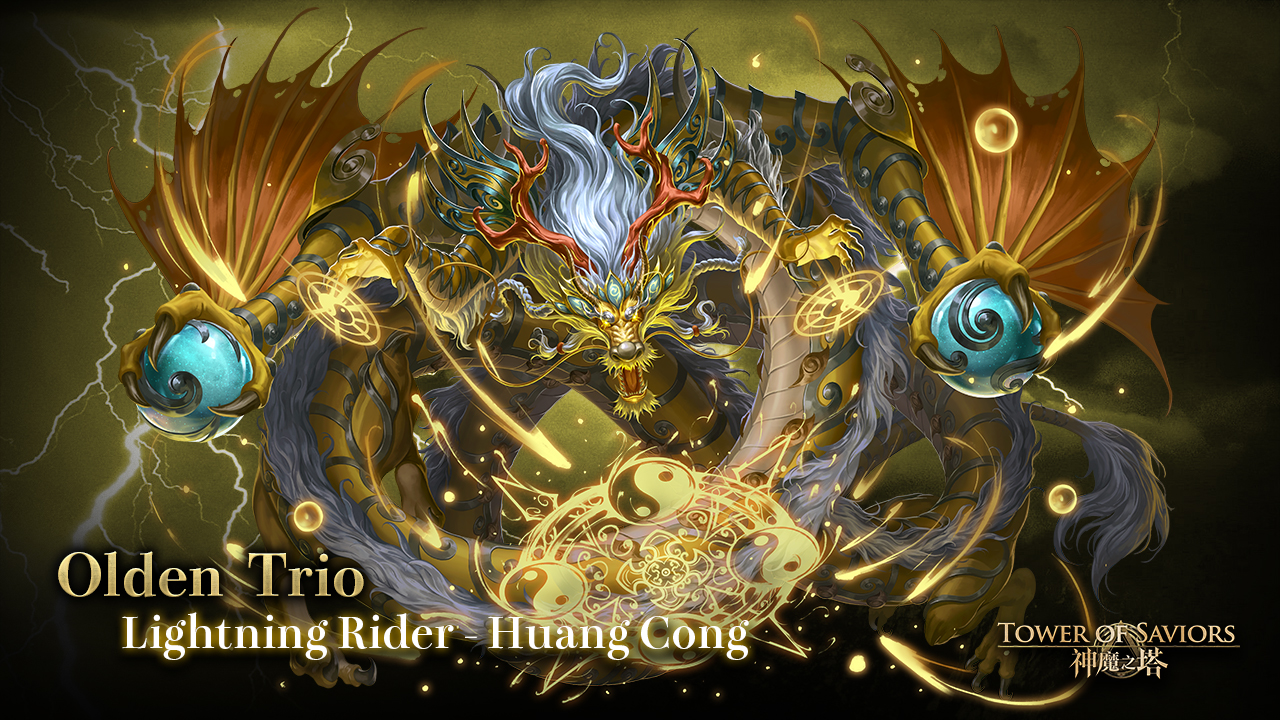 Characters of Olden Trio will be added into the realm on 20 Jan (Mon). Dragons, Beasts and Gods will have a fierce war! You can draw the characters in the Diamond Seal “Breath of Dragon”! First, let us introduce the skill info of “Flicker of Scale – Chi Zhang”, “Righteous Fire – Marduk” & “Lightning Rider – Huang Cong” for you! For rare characters, stay tuned next week!

Fire Dragon “Chi Zhang” can activate “Breaths of the Runedragon” upon 7CD:

I. Restore all Frozen Runestones to normal state.
II. Turn Earth, Light and Dark Runestones into Enchanted Heart Runestones.
III. When there is an additional effect in play upon Skill activation, Attack of the Monster and “Fire of Sagacity – Enlil” x 3. 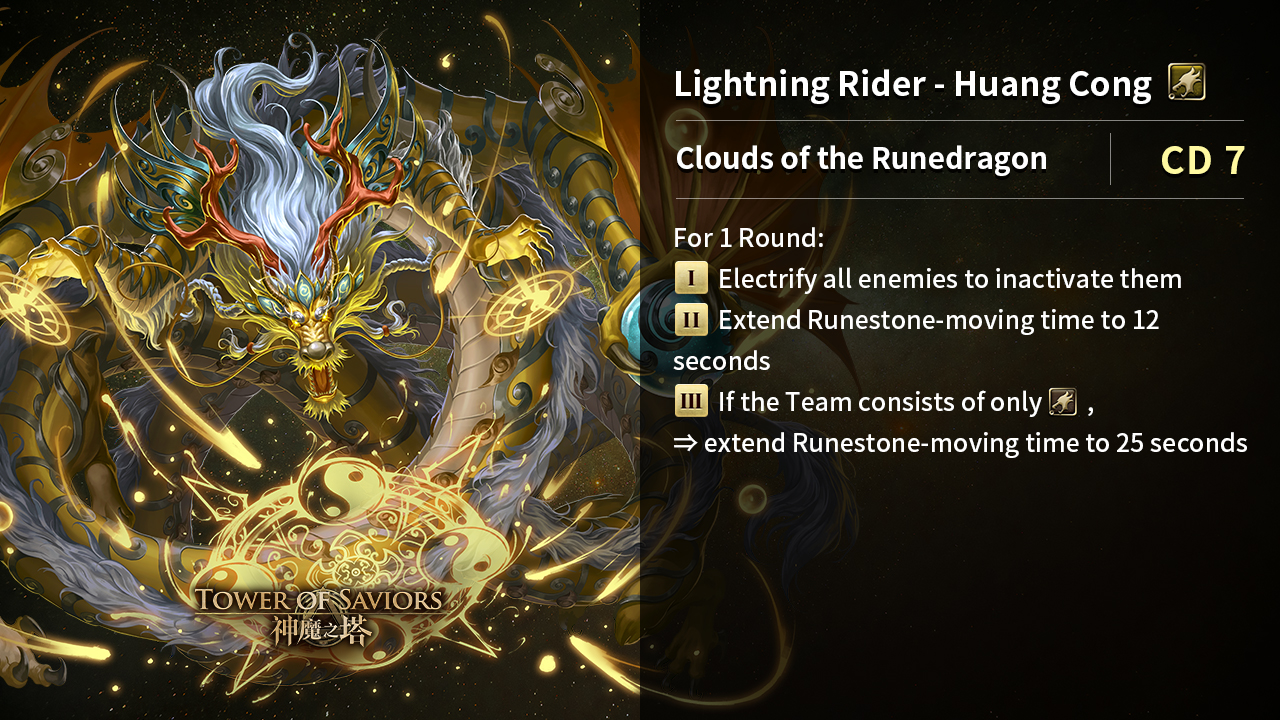 “Amiable Caretaker – Lu Cun” will set up the ultimate stage “Behind the Dipper” at 10pm, 17 Jan (Fri). He will join hands with “Blazing Kindness – Lian Zhen” and “Showy Casanova – Tan Lang” to battle Summoners!

After that, Runestones of the Metasphere will be changed into Earth Runestones each Round.

When an Earth Combo is made and an attack is launched, the enemy reflects 200% of its Attack and recovers HP as much as the Damage dealt by Summoner in the Round (only the first batch of Runestones dissolved will be counted).

During the 2nd phase, CD of the enemy’s first attack will be 1.

In the first Round, the enemy explodes all Earth Runestones to increase its Attack onwards, and clear the power gathered in the Craft Apparatus to decrease its Damage received onwards.

The enemy attacks regardless of all Damage-reducing and Willpower Skills. 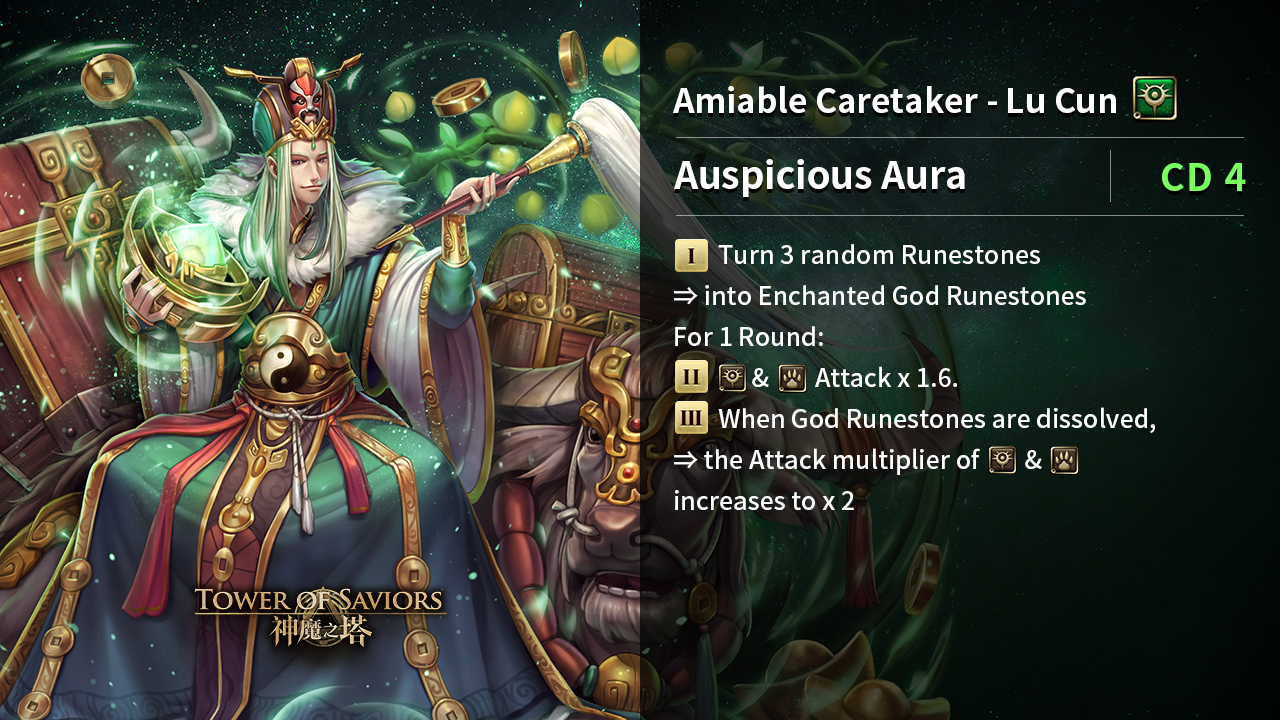 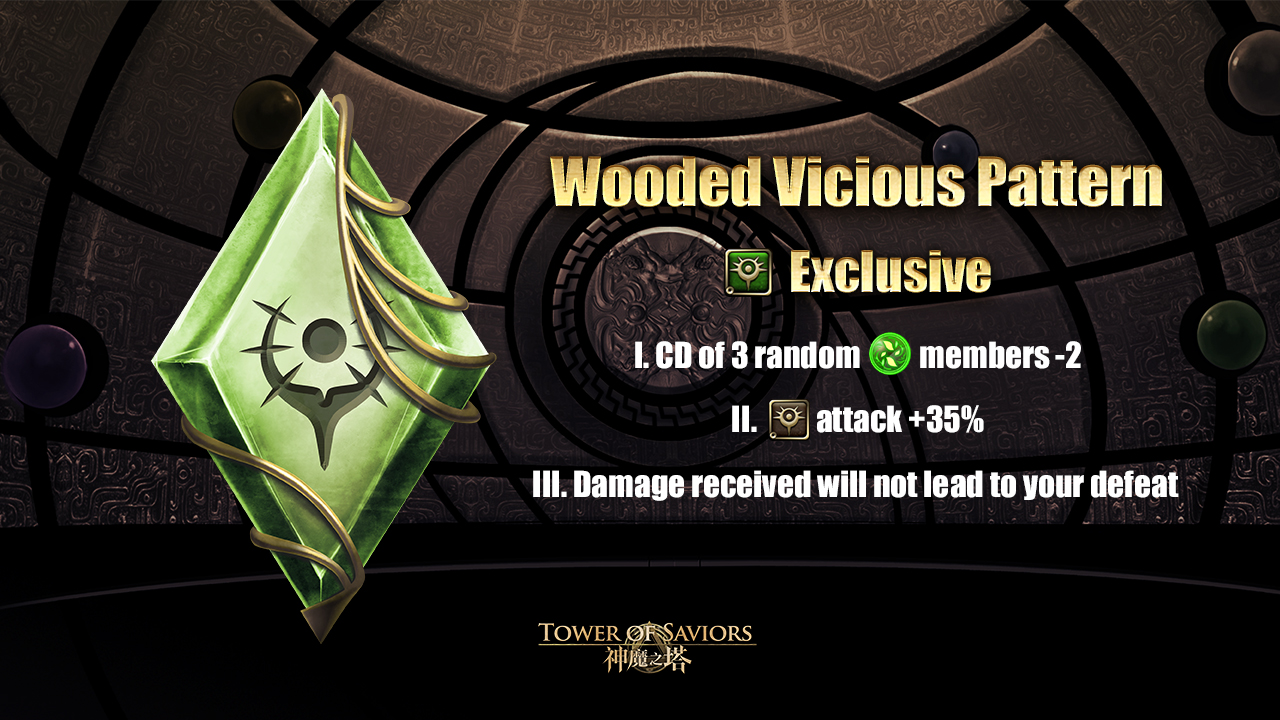 When Summoner reaches “Major I” in the Arena, “Birth of Magnificence – Brock” (Skill Lv.10) will be given! 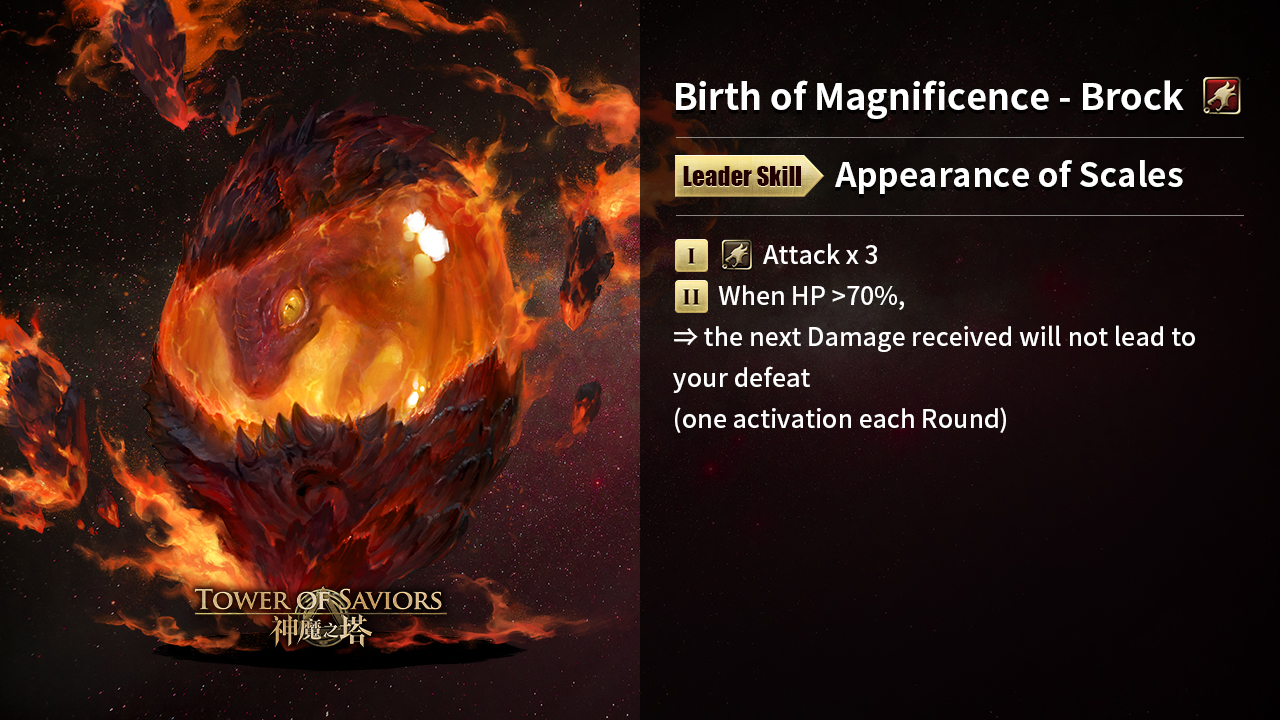 Fire Dragon “Birth of Magnificence – Brock” has the leader skill “Appearance of Scales”:

I. Dragon Attack x 3.
II. When HP >70%, the next Damage received will not lead to your defeat (one activation each Round). 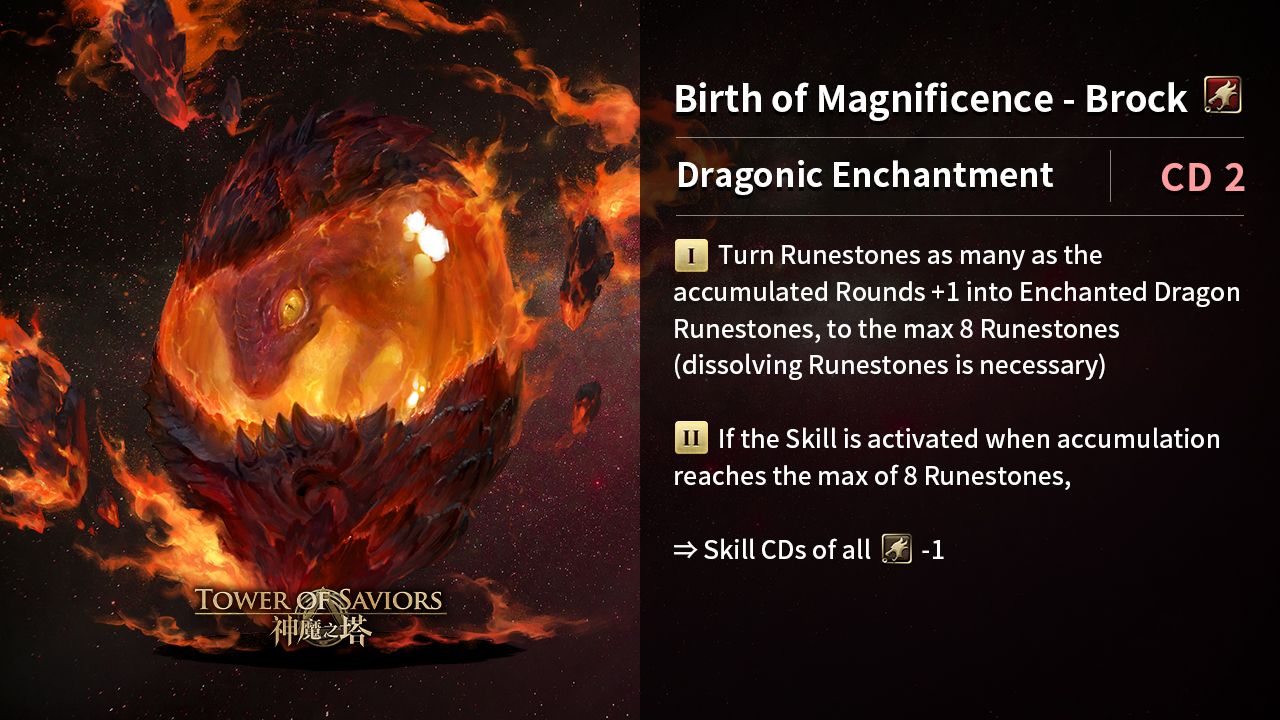 “Birth of Magnificence – Brock” can activate “Dragonic Enchantment” upon CD 2:

I. Turn Runestones as many as the accumulated Rounds +1 into Enchanted Dragon Runestones, to the max 8 Runestones (dissolving Runestones is necessary).
II. If the Skill is activated when accumulation reaches the max of 8 Runestones, skill CDs of all Dragons -1.

* details to be announced later

It’s getting closer to the 7th Anniversary! Reach specific login days to get the drawing chance of “Olden Trio”! For those who accumulate 6-year login days or above, up to 7 drawing chances will be given! If you’re lucky, you will get the rare “Auspice of Protection – Cang Bi” for free!

Into the 3rd week of the All Max giveaway, login to get a draw chance of “Dance of Elves” from 13 Jan (Mon) – 19 Jan (Sun)! “Reflection of Astro Glow – Pupuro”, “Shrunk Petals – Sakura”, “Rekindled Honor – Cornflower”, “Lovey Dovey Romancist – Rose”, “Heated Fluorescence – Amber”, etc will be included in the card pool!

New story mode “The Olden Stele” will be launched upon 18.3 version update. “The Olden Stele” records the hatred of losing the important one and the resentment among “Eldus”, “Runedragon” & “Elemental Beast”. The story is waiting for you to unfold.

“The Olden Stele” is in the “The Traveler’s Memories”! Complete the final floor and gather a certain amount of “Soul Gem” to enter the Extra stage, where “History Marker – Shamash” will be your challenge. Defeat this Extra stage and you’ll get “Shamash” (Skill Lv.1) x1.

Perfect for attack or defense!!

5-attribute & Heart Runestones in order from left to right

Turn the bottom row of Runestones into Runestones of the Race of the Monster in that column.

The more the times of activation of this Skill, the more the rows of Runestones to be turned, to the max 5 rows. 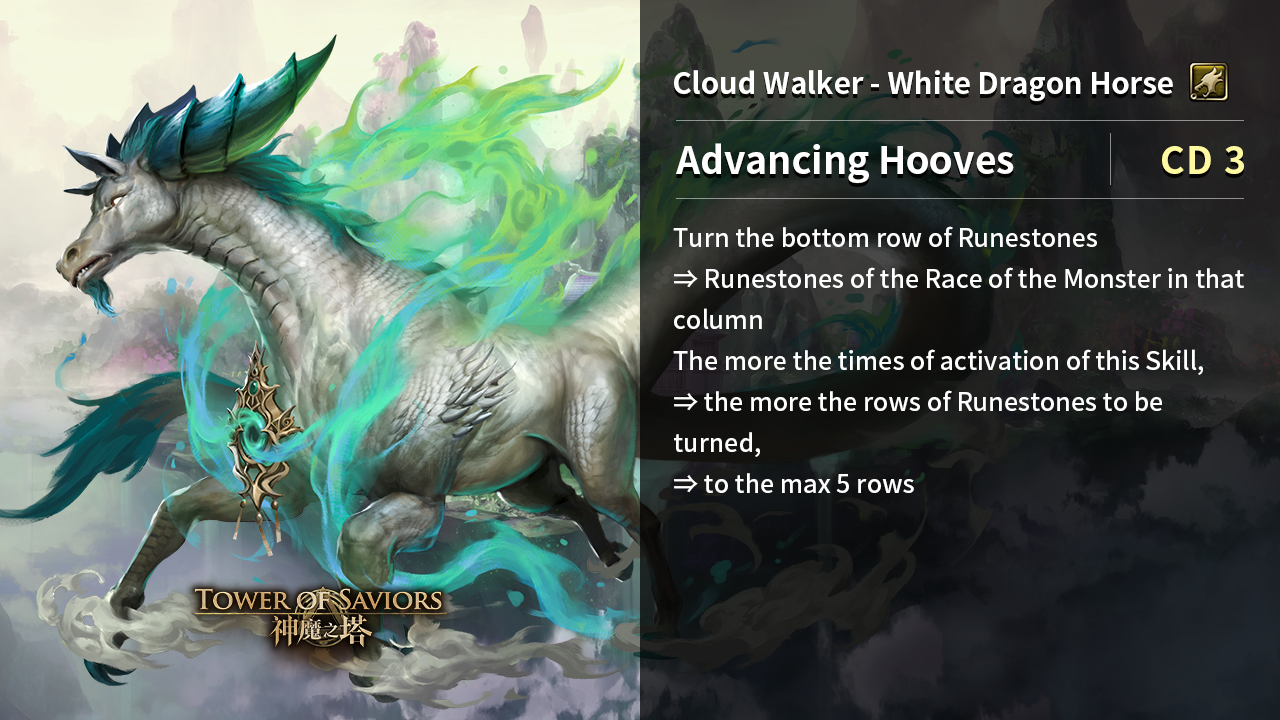 Also, you can redeem the new outfit of “Luna” —— “Mistletoe Blessing – Luna” in the Arena! 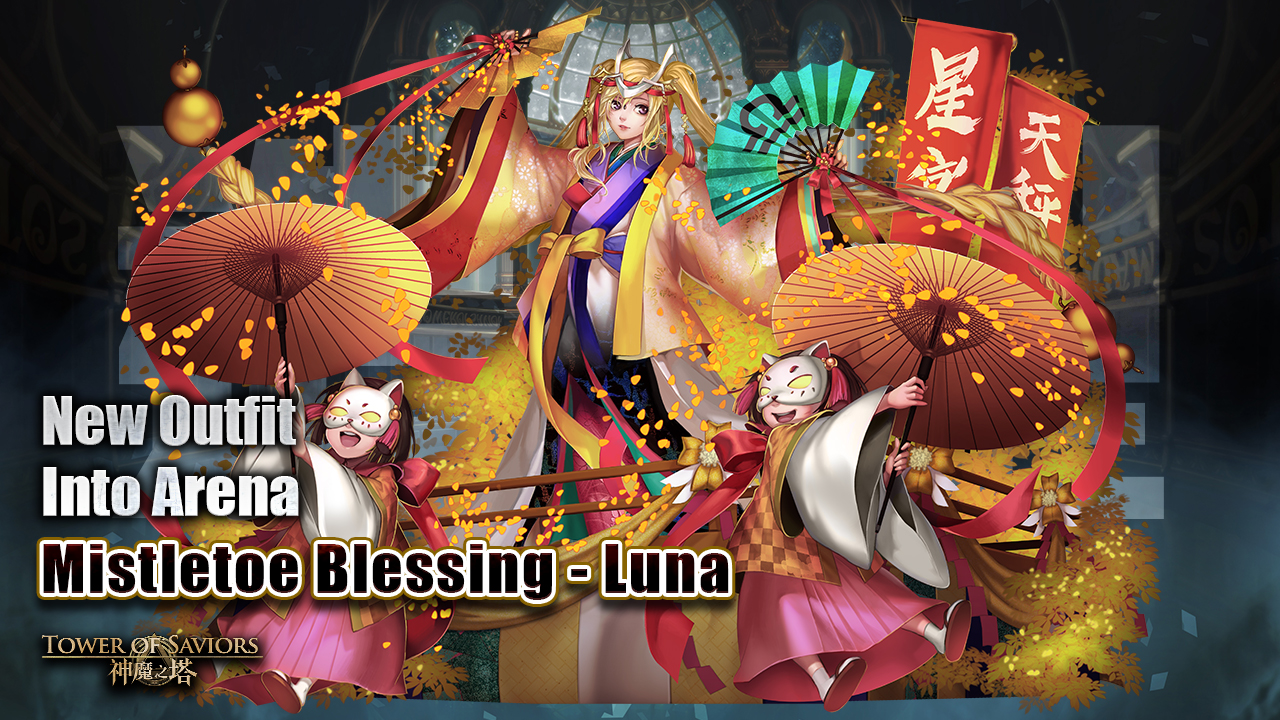 In this demo, Shamash will be using her skill “Total Control” to have a fierce fight against Pompeii!

In this demo, “Amiable Caretaker – Lu Cun” will join the Earth God team to defeat enemies with his skill.