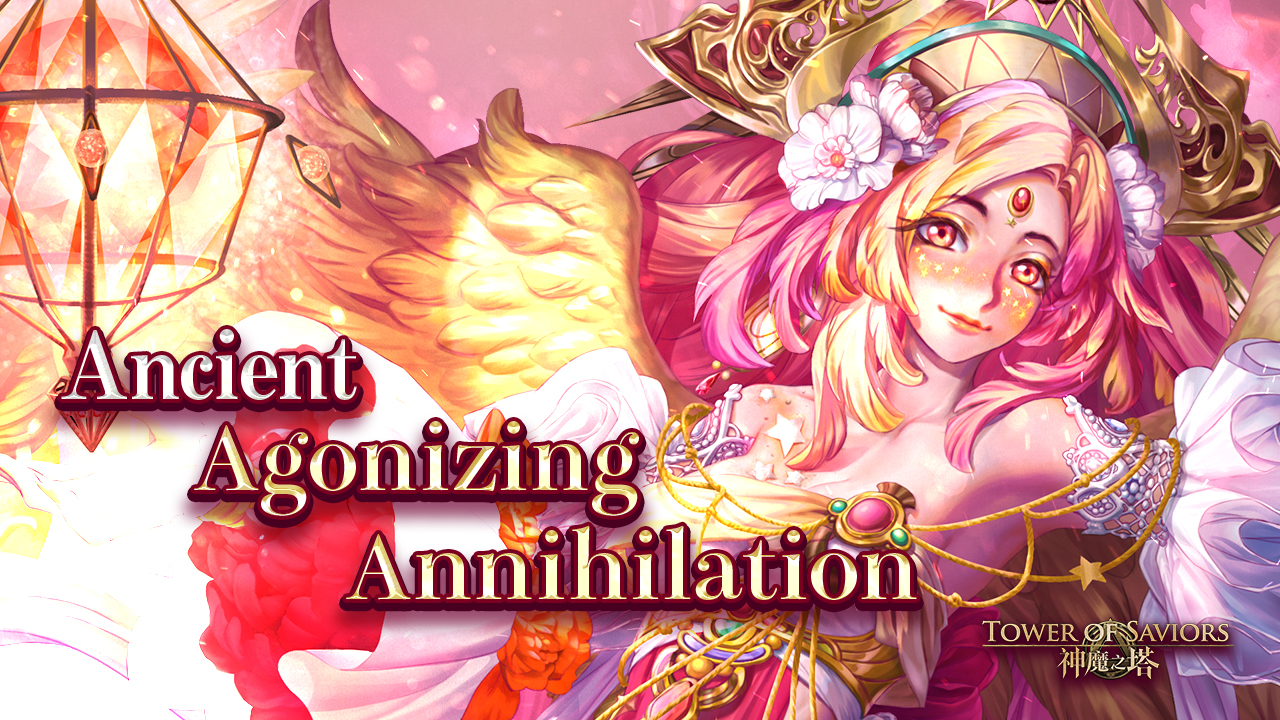 Version 18.3 “Ancient Agonizing Annihilation” will be released next mon! Brand new series “Olden Trio” is going to the realm. The conflicts between Runedragons, Elemental Beasts and Eldus bring chaos into the land. Over the year, the top-notch black-gold character “Majesty of Millennium – Ying Zheng” will return together with “Transcendental Sage – Tang Sanzang” & ”Princess Iron Fan – Rakshasa”!

Into the 7th anniversary of Tower of Saviors, the main story develops a new chapter with the lead of “Cang Bi”, “Enlil” and “Veronica”. The Enochian Tower will also be decorated to celebrate the new year journey!

As the 1st chapter of the main story reveals, “Cang Bi”, “Enlil”, “Veronica” and other characters will be put into the Diamond Seal “Breath of Dragon”. The plots among these 3 races are waiting for you to explore!

The 3 rare characters of “Olden Trio” are  “Cang Bi”, “Enlil” and “Veronica”, taking the strength of Dragons, Gods and Beasts to the next high level! Now let me introduce them one by one.

When using “Cang Bi” as dual leaders, you can put Gods and Beasts into the team if needed. . When a Dragon, a God and a Beast launch attacks in the same Round, Team Attack x 1.8 additionally! With dual leaders, your attack can be up to x81. Also, Water Runestones also possess 50% effect of other Runestones, which can increase the attack of other members and recovery! Extending 2-sec moving time regardlessly can add flexibility into your play.

Runedragons carry the fame for “toughest shield” in the story setting. “Cang Bi” is good at both attack and defense among Runedragons. “Cang Bi” has the unique “Dragon Point” system, which affects the attack and defence effects (entering the stage will be granted 50 Points)! Summoner can increase Dragon Points by recovering HP. When Dragon Points reach 100, damage reduction will be 100%. On the other hand, dissolving Water Runestones or receiving enemy attack will reduce Dragon Points. When it reaches 0, Team Attack x5 additionally.

Dragon characters usually have low recovery in TOS, but using “Cang Bi” as dual leaders will break this rule. Recovery of each Member +300. Every time when you dissolve a Dragon Runestone, you can recover 3000 HP, to the max 60,000. Another character “Sympathetic Stream – Shui Huan” can turn into Dragon Runestones, so it will be helpful to recover HP in “Cang Bi” team.

“Cang Bi” can activate “Determination of the Runedragon” upon 6 CD:

I. Boss Skill “Sticky Runestones” will be nullified.
II. Recover 5% HP for every time when a sticky position is touched (no overhealing).
III. Each Monster in the Team launches an extra attack every Round.

The Skill stays in play within the Wave.
IV. Restore all Weathered Runestones to normal state.
V. Turn all Runestones into Enchanted Runestones.
VI. Skill CDs of all Dragons, Gods, Beasts (except “Auspice of Protection – Cang Bi”) -1. 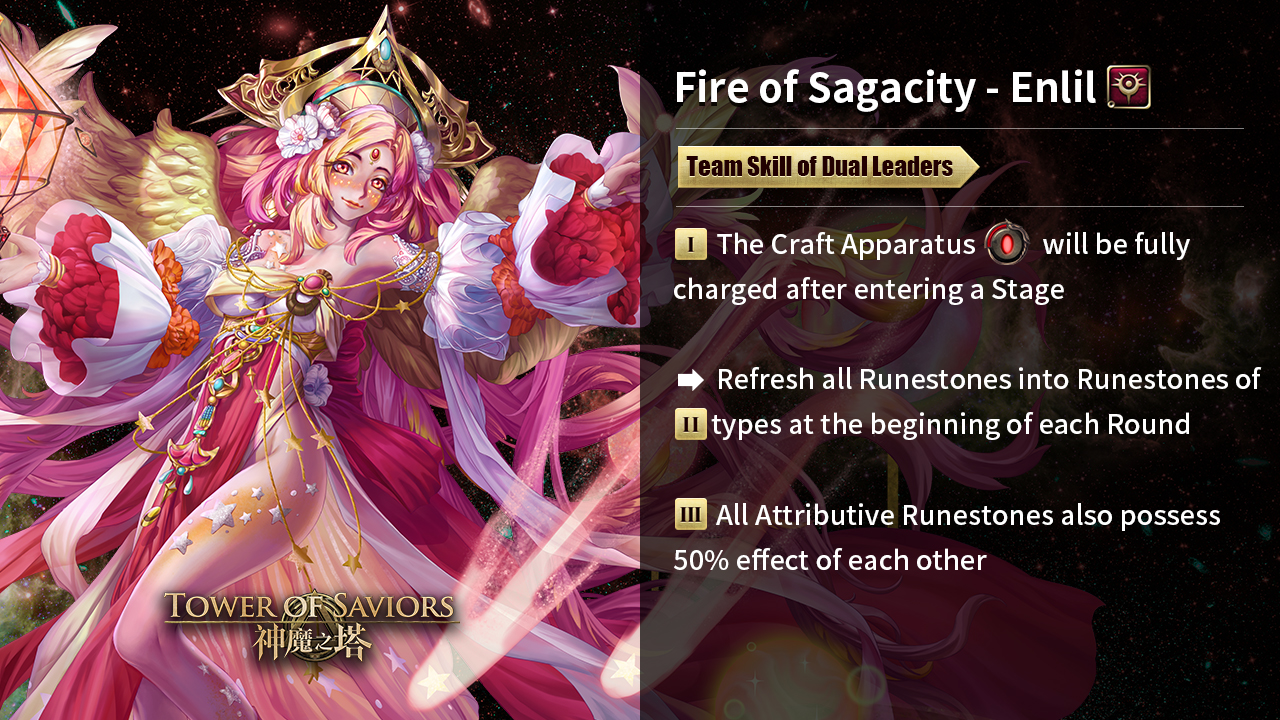 “Fire of Sagacity – Enlil” can team up with either all-god team or god+human team (at least 4 gods). he more the Runestones dissolved, the higher the Team Attack increases additionally, to the max x 2.8 for 20 Runestones. Dual leaders to dissolve 20 runestones can give up to x331 attack! With 50% runestone effect possession, the damage can be brought to the next level.

With dual leaders, 2-sec moving time will be extended regardlessly. And the team is over 30000 HP, which gives you more room to survive!

Apart from fully-charged craft apparatus after entering the stage, Enlil can randomly turn runestones into 5 attributes and heart runestones. So no more lacking of any runestones when dealing with a quintet shield.

I. Fire Damage can overpower Water enemies.
II. By dissolving Race Runestones, the Monster launches an extra Fire attack and an extra Earth attack. The Skill stays in play until deactivation or defeated. This Skill can be deactivated anytime.

Upon deactivation of the Skill: Explode the columns of Runestones below Gods to generate Enchanted God Runestones. 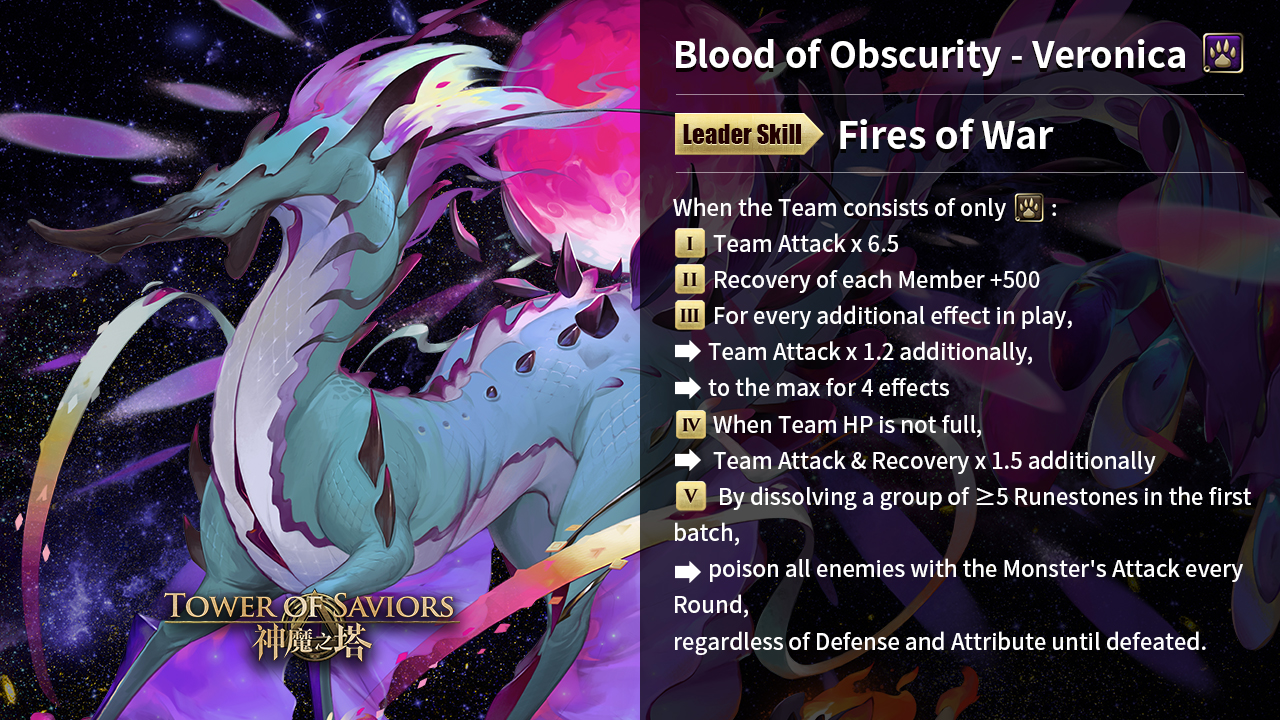 When the Team consists of only Beasts: I. Team Attack x 6.5. II. Recovery of each Member +500. III. For every additional effect in play, Team Attack x 1.2 additionally, to the max for 4 effects. IV. When Team HP is not full, Team Attack & Recovery x 1.5 additionally. V. By dissolving a group of ≥5 Runestones in the first batch, poison all enemies with the Monster’s Attack every Round, regardless of Defense and Attribute until defeated. After entering a stage, beast CD-6 is. When using “Veronica” as dual leaders with Behemoth, beast CD-8 after entering a stage. Also, when using “Veronica” as dual leaders, you can extend Runestone-moving time regardlessly by 3.5 seconds.

“Veronica” can activate “Shield of Purple Blood” upon 5CD:

In the expense of 20% HP (this Skill cannot be activated when Team HP is 1):

“Mutated Vessel” is the skill level up material for “Olden Trio”. When used as a Level-up Material for a Monster of “Olden Trio” whose Skill Lv. has not reached maximum yet, the accumulated Battle Rounds of the target Monster increase by 600; while increase by 50 for other characters. Come to purchase it in Trade Fortress upon version update.

The OP “Majesty of Millennium – Ying Zheng” will be returning with “Rakshasa” & “Tang Sanzang” from 24 Jan (Fri) – 2 Feb (Sun)! During the event period, 10-draw option will be available. For each 10-draw you made, relevant attribute of Alpacas will be rewarded (Dark, Earth, Light), up to 7 Alpacas. 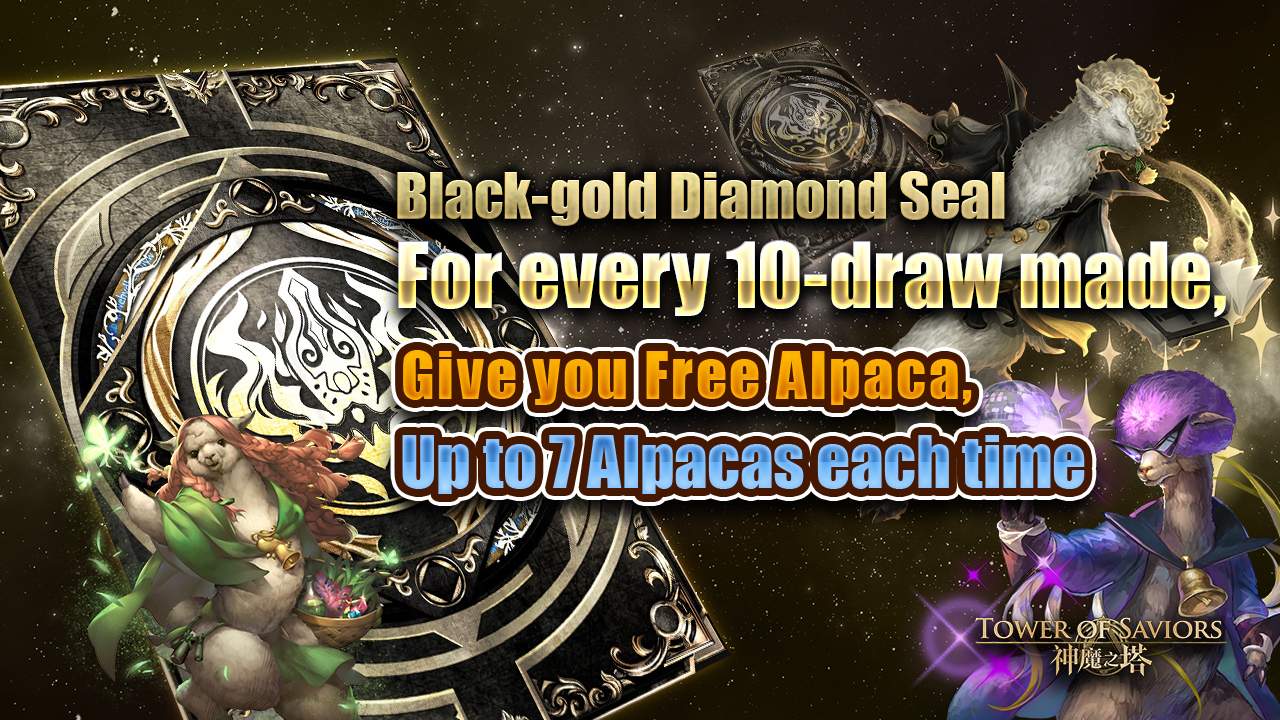 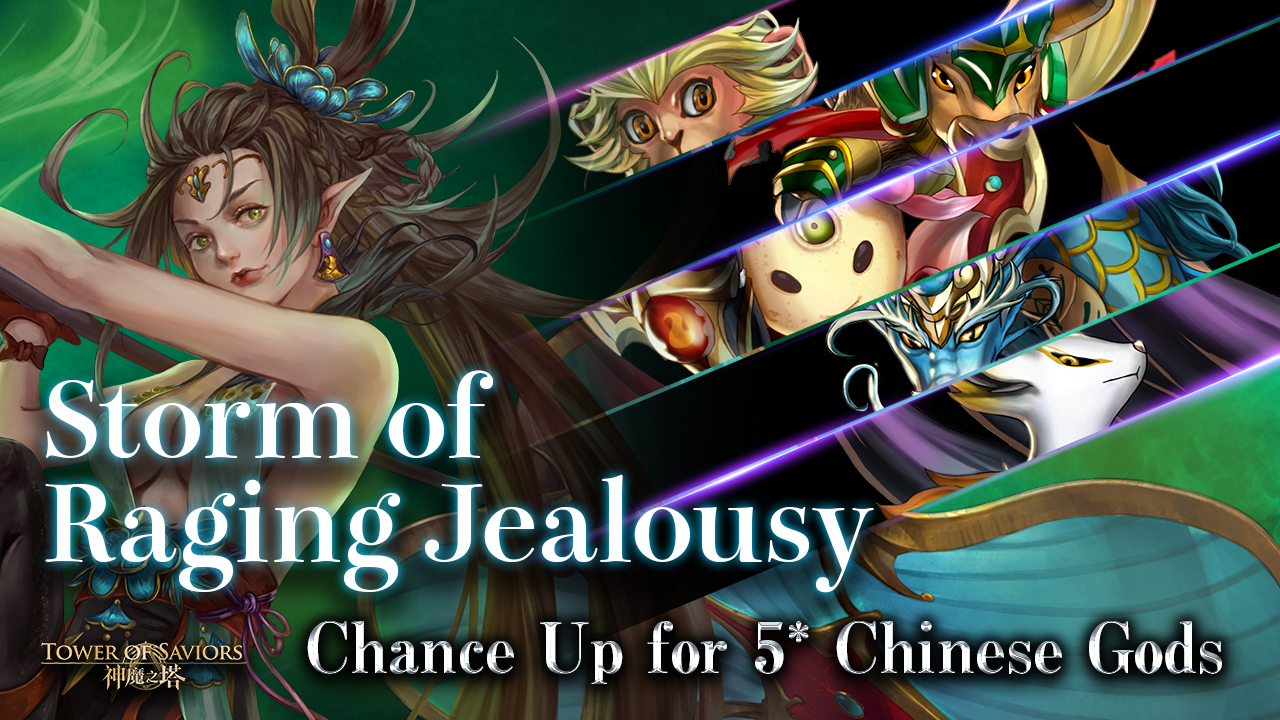 To celebrate the mighty “Ying Zheng”, “Rakshasa” & “Tang Sanzang” return, login every day to get the drawing chance x2 during the 10-day event of “Grand Return of the Top Tier”. 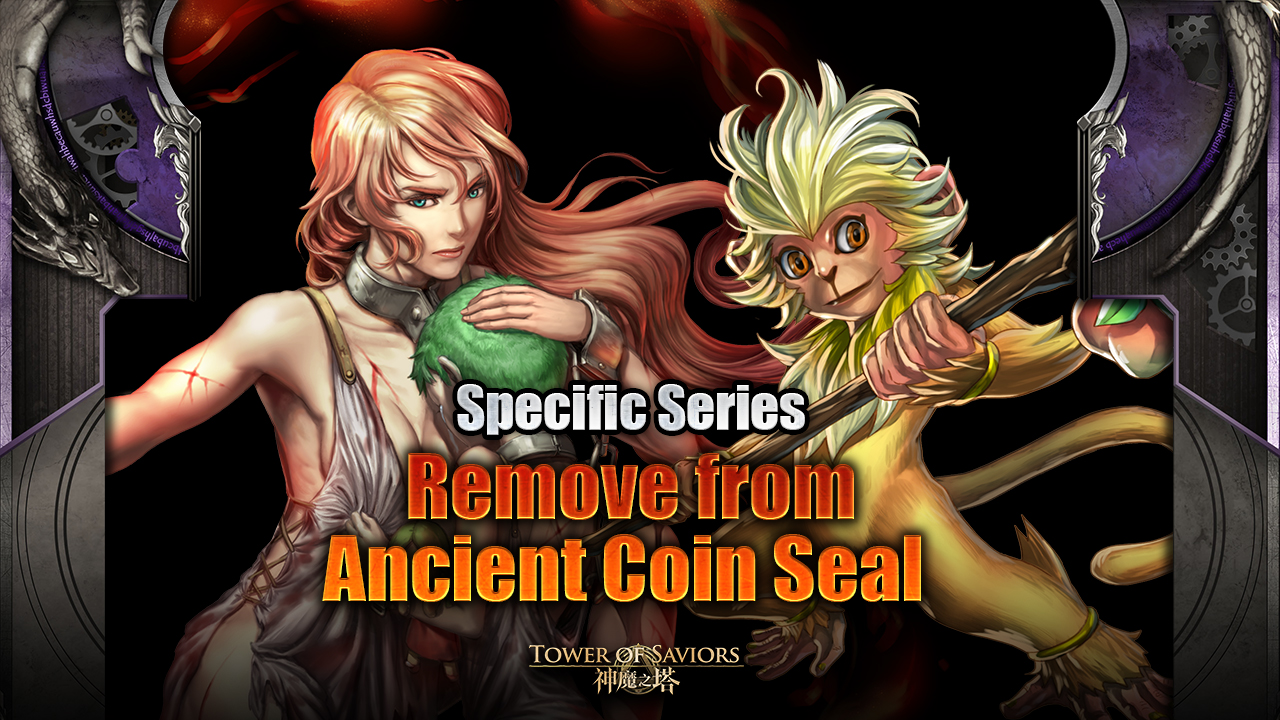 Ancient Coin Seal will be opened for 10 days during the event period. This time, “Chinese Gods”, “Origin of Demons”, “Primal Greek Gods”, “Revolutionary Heroes’ & “Companions of Mystical Beasts” will be removed from the card pool.

During the 7th Anniversary, diamond shop will get a limited bonus!! From 24 Jan (Fri) – 16 Feb (Sun), when you make a single purchase of 30 or more Diamonds, you will get extra 30 Diamonds & “Quintet Madheads” for free!

“Power of Immortals – Beastie Trio” will set up the new Joint Operation “Prankster Xians” on 21 Jan (Tue) to create multiple challenges for Summoners!

Light Beast “Power of Immortals – Beastie Trio” is a good member of “Xiwangmu”, “Nüwa” & “Fuxi”. It can activate “Power of the Master” upon 6 CD:

I. The Monster launches 2 extra attacks.
II. Damage received -60%.
The effect stays in play until no God Runestones are dissolved.
III. If the Leader is a Monster of “Primal Deities”, dodge an attack from an enemy once. 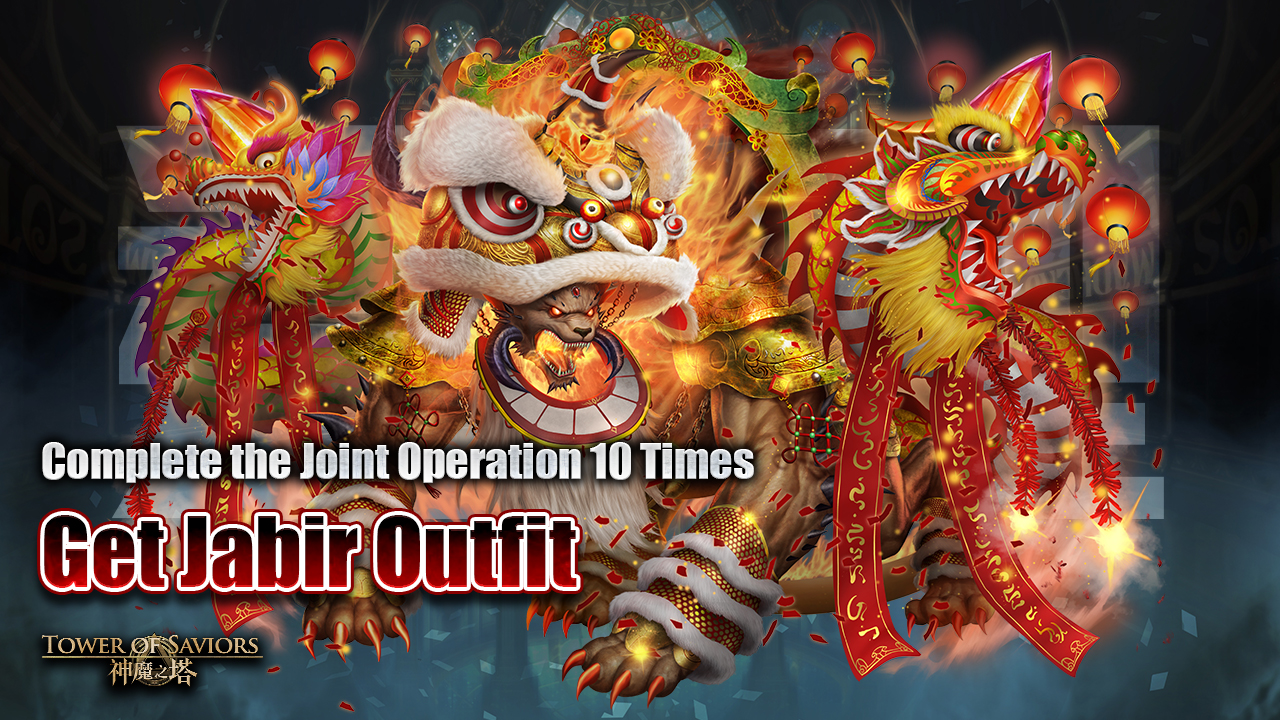 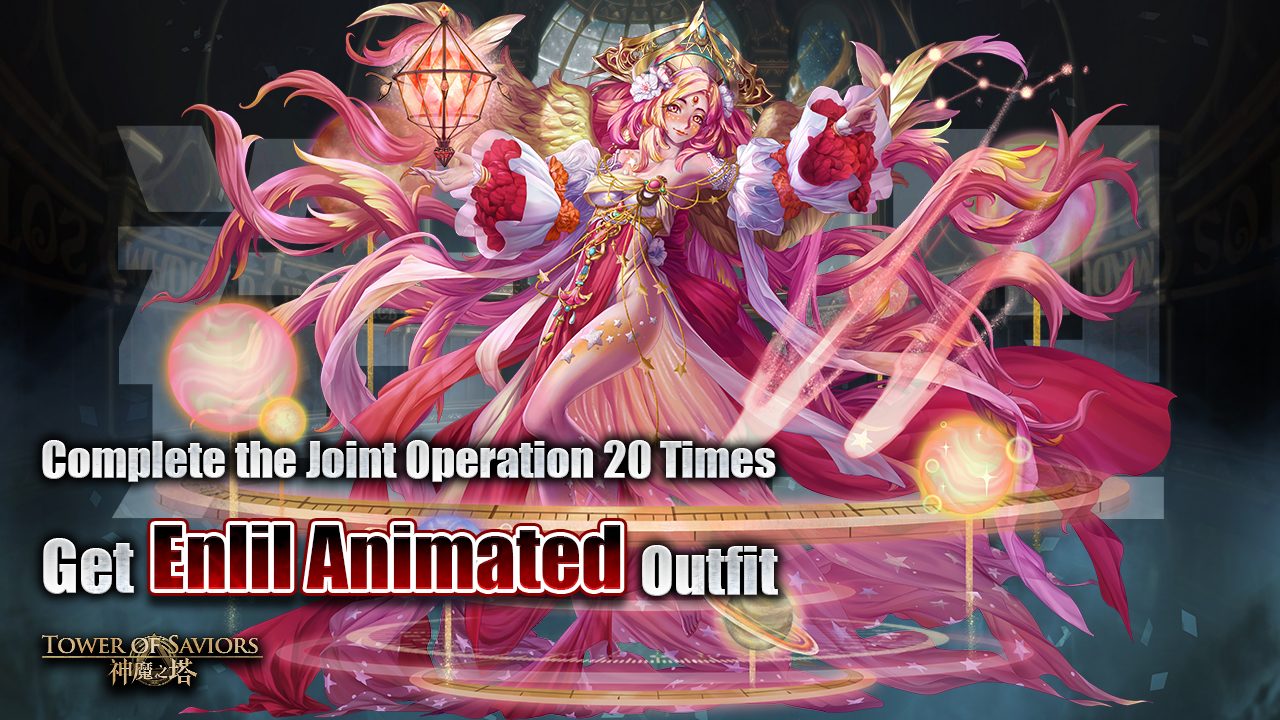 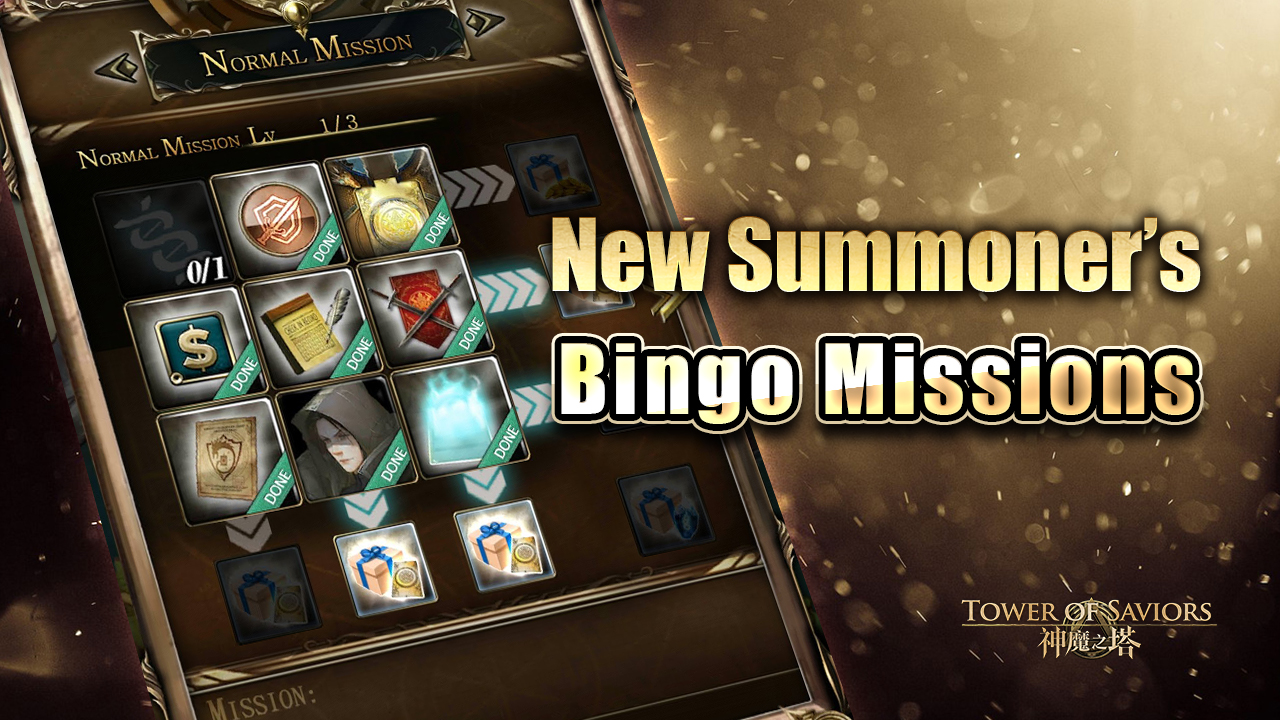 Upon version 18.3 update, new Summoner Bingo will be introduced.  The bingo missions are divided into basic and advanced difficulty. Each difficulty has 3-page missions, total 6 pages. There is no time limit for these missions. Each page, there are 3×3 mission slots. When you finish a row or a column of missions, rewards will be given. Completing 9 mission slots will give you a bonus reward! Mission rewards include Harpy, Shedu, Fluorescent Python, etc!

From 20 Jan (Mon) – 26 Jan (Sun), login the game to receive a drawing chance of free dragon all max character. It contains 7 dragons in the card pool, including “Demiurge of Antinomy – Daoloth”, “Fiend of Destruction – Azathoth”, etc!

As the Chinese New Year is coming, “New Year Banquet” material stages will be available for you to farm skill-level up materials, souls or level-up materials! All you need is only 25 Stamina and when completing the stage, you can get 15000 EXP!

In the version 18.3, new bi-weekly series “Circus Wonder” will be out! The 1st character is Water Human “Flying Trapeze – Harold & Harvey”!

In this demo, “Cang Bi” will showcase the “Dragon Point” system to lead the dragon and god members to win the battle.

In this demo, “Enlil” will lead the full-god team to overpower water enemies with her special skill!

In this demo, “Veronica” will bring the full-beast team to smash the enemies with its skill!