Character Skills of “Wrath of the Gods”!

Tower of Saviors, featuring “TOS x The Seven Deadly Sins”, will be released next monday! Here we will reveal the character skills of the “Wrath of the Gods” series.

During the crossover in version 19.2, apart from “Meliodas the Dragon Sin of Wrath” and “Ban the Fox Sin of Greed” previously introduced, rare character “King” and key members “Diane”, “Merlin”, “Gowther”, etc will be covered below. 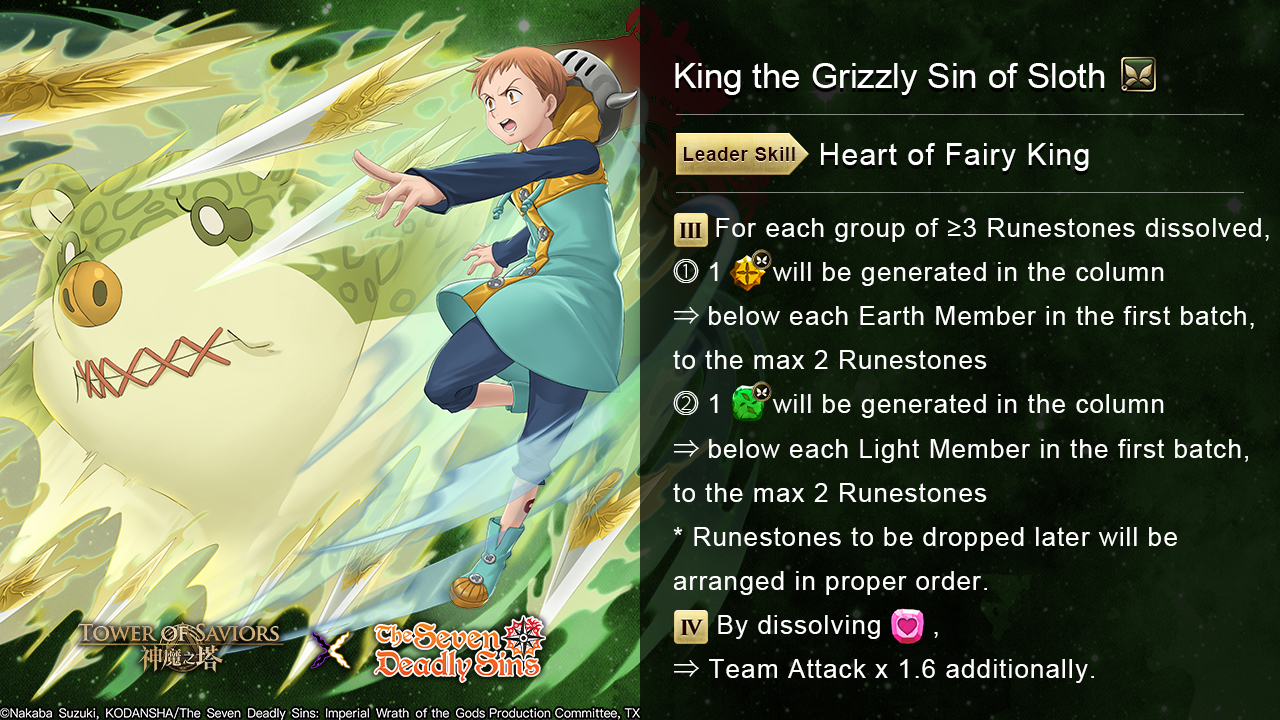 As the owner of the Fairy King’s Forest, “King the Grizzly Sin of Sloth” has the leader skill “Heart of Fairy King” that when the team has only Elf or Human, and 4 or more Elves, Team Attack x 6 with enhanced HP & Recovery; Earth, Light and Heart Runestones also possess 50% effect of each other; For each group of ≥3 Runestones dissolved,

⓵ 1 Light Elf Runestone will be generated in the column below each Earth Member in the first batch, to the max 2 Runestones.

⓶ 1 Earth Elf Runestone will be generated in the column below each Light Member in the first batch, to the max 2 Runestones (Runestones to be dropped later will be arranged in proper order).

Earth Elf “King the Grizzly Sin of Sloth” can activate his dual skills Spirit Spear Chastiefol, Fifth Form: “Increase” & Spirit Spear Chastiefol, Fourth Form: “Sunflower” depending on different battles. For the former skill, Water Runestones can be turned into “Enchanted Earth Elf Runestones” and the skill can also increase combos. For the latter skill, Runestones can be dissolved by aligning 2 or more of them in the first batch and the Character will launch Extra Earth attacks. 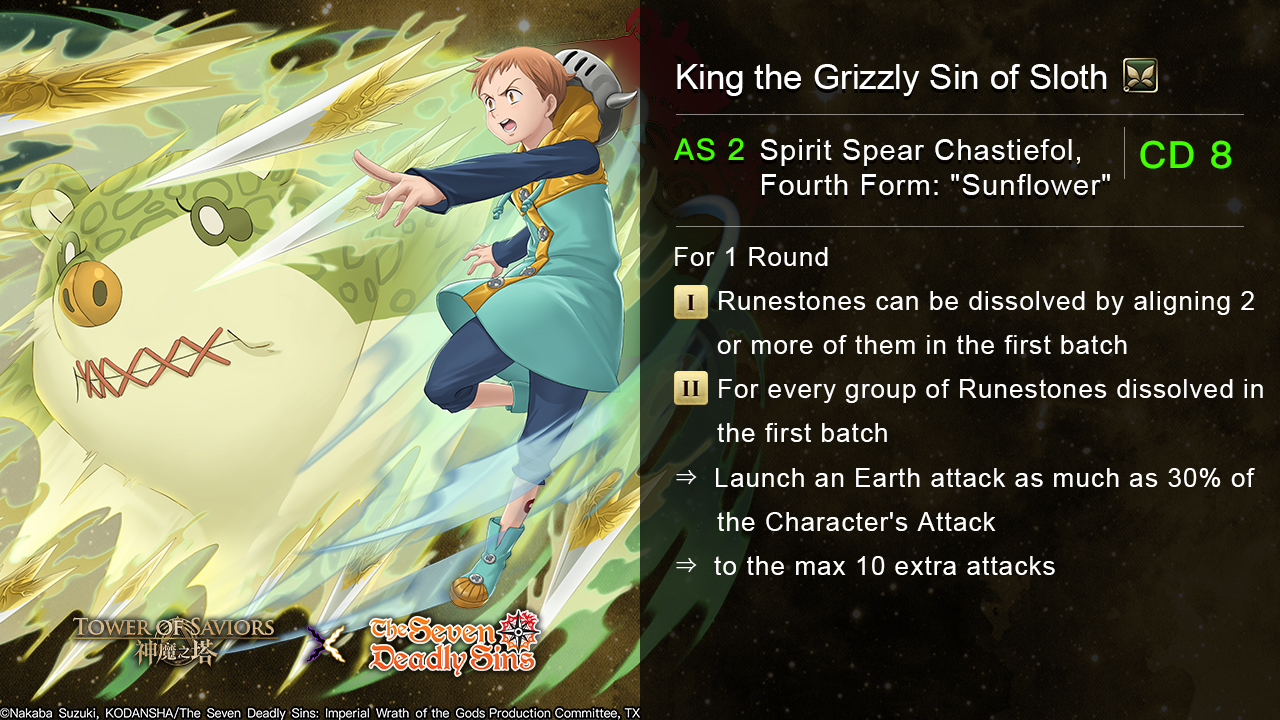 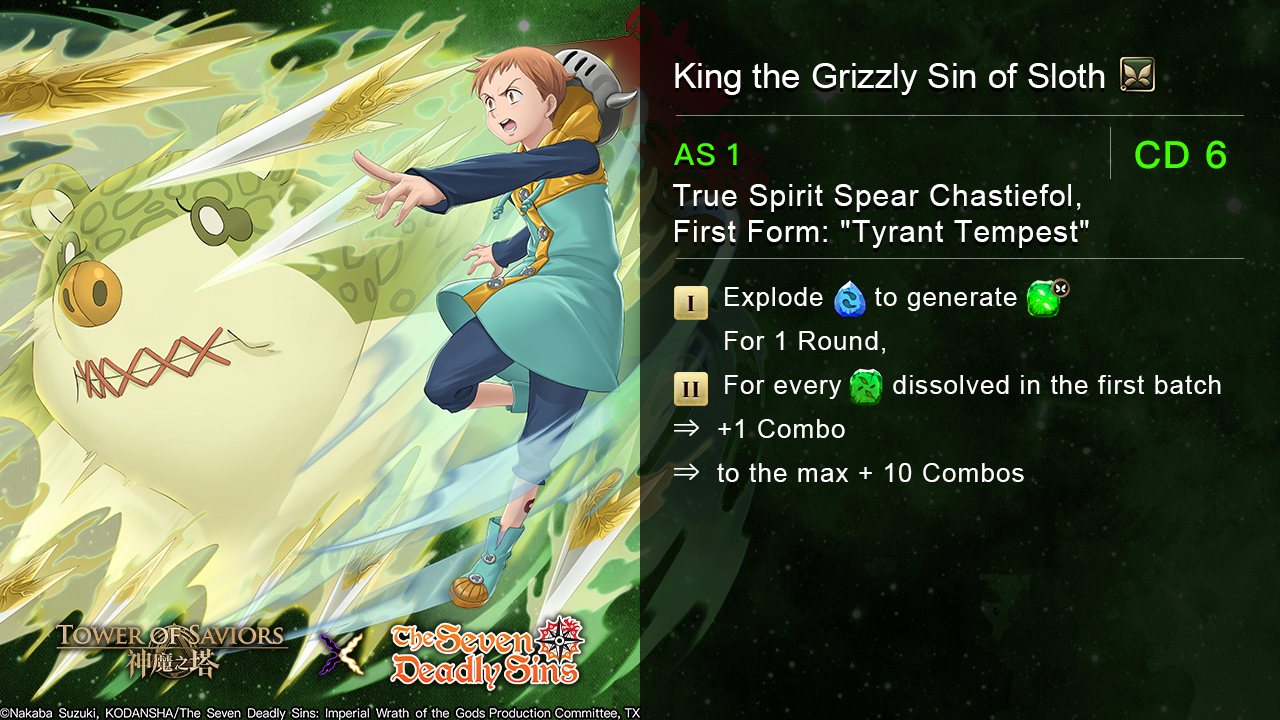 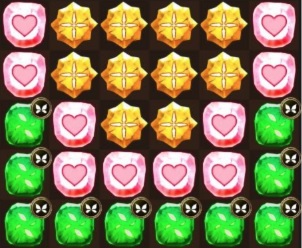 Also, when you bring “King” and “Diane” or sister “Elaine” into battles, these characters on the left will have buffed HP, Attack and Recovery. 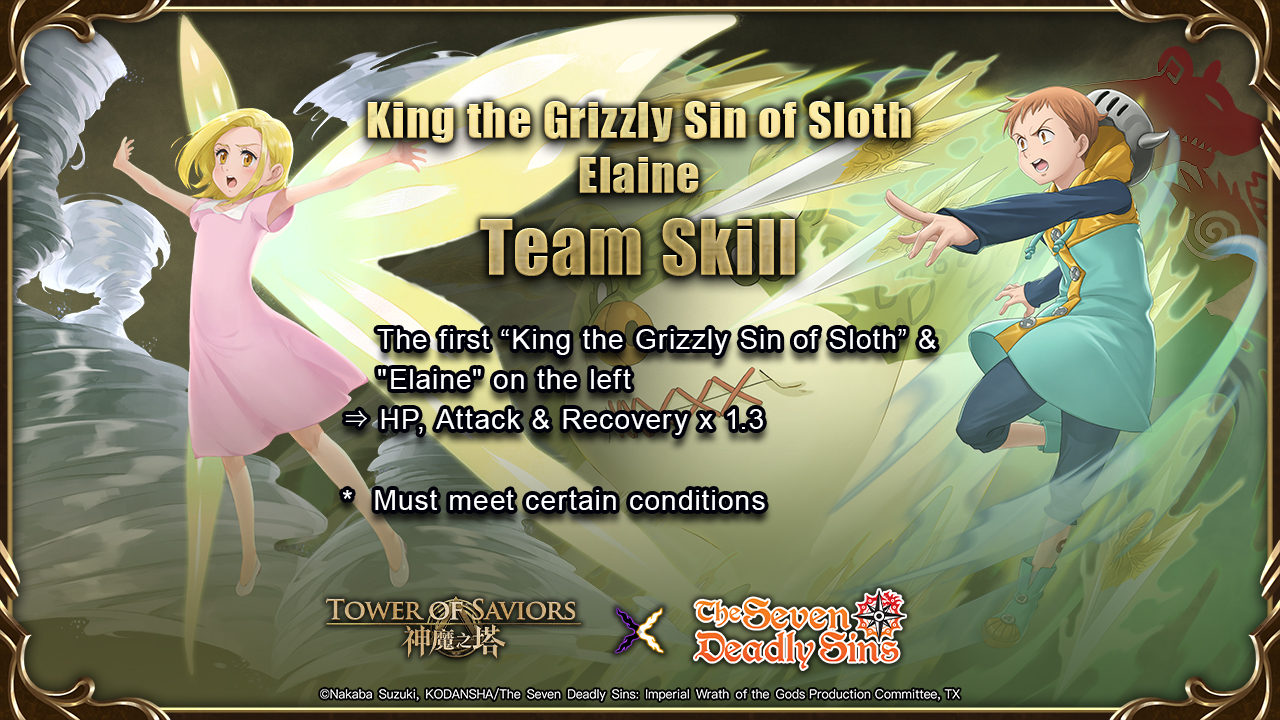 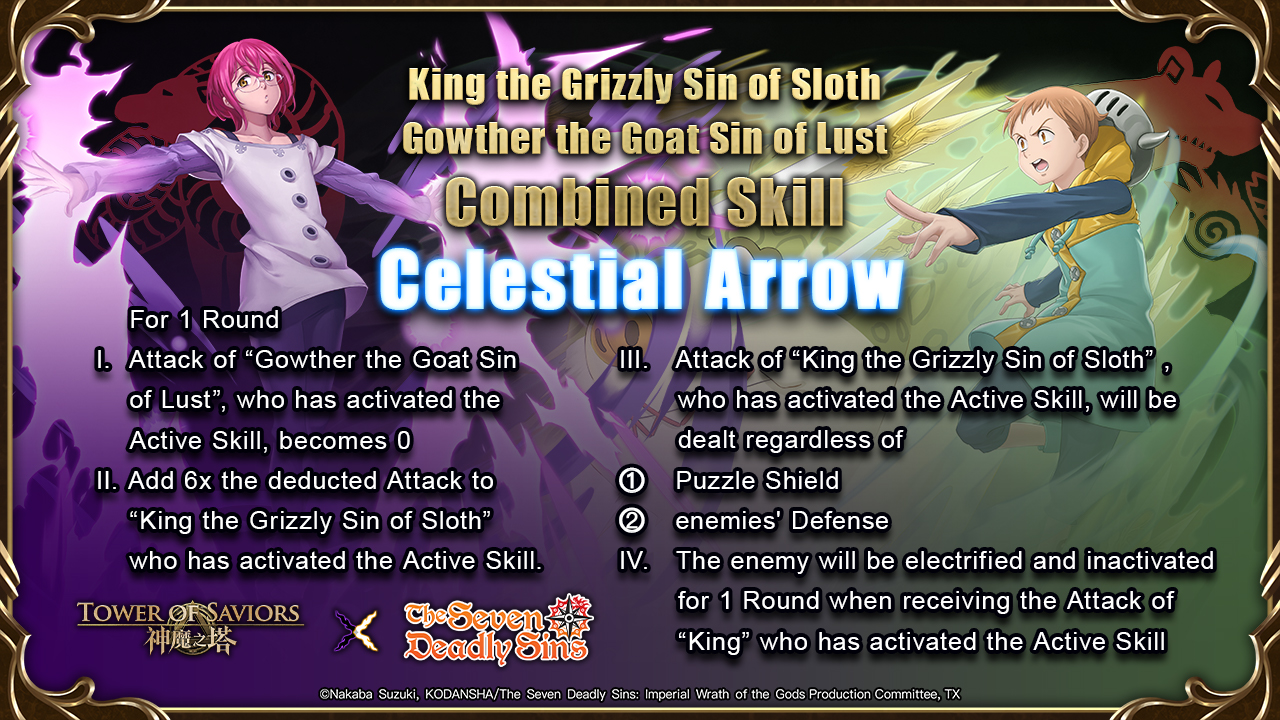 “King the Grizzly Sin of Sloth” and “Gowther the Goat Sin of Lust” (Characters’ Lv reaches 50 or above) can work together to activate the combined skill “Celestial Arrow”:

“Gowther the Goat Sin of Lust” can activate “Jack” that for 1 Round, the enemies attack themselves or each other; When the effect is in play, the enemy’s Defense becomes 0.

“Merlin the Boar Sin of Gluttony”, the greatest magician in Britannia, can activate “Shock Stinger” upon 8 CD:

turn the columns below Leader and Ally into Enchanted Dark Runestones upon the activation of the Skill and at the end of the Round; For 2 Rounds, electrify all enemies to inactivate them. 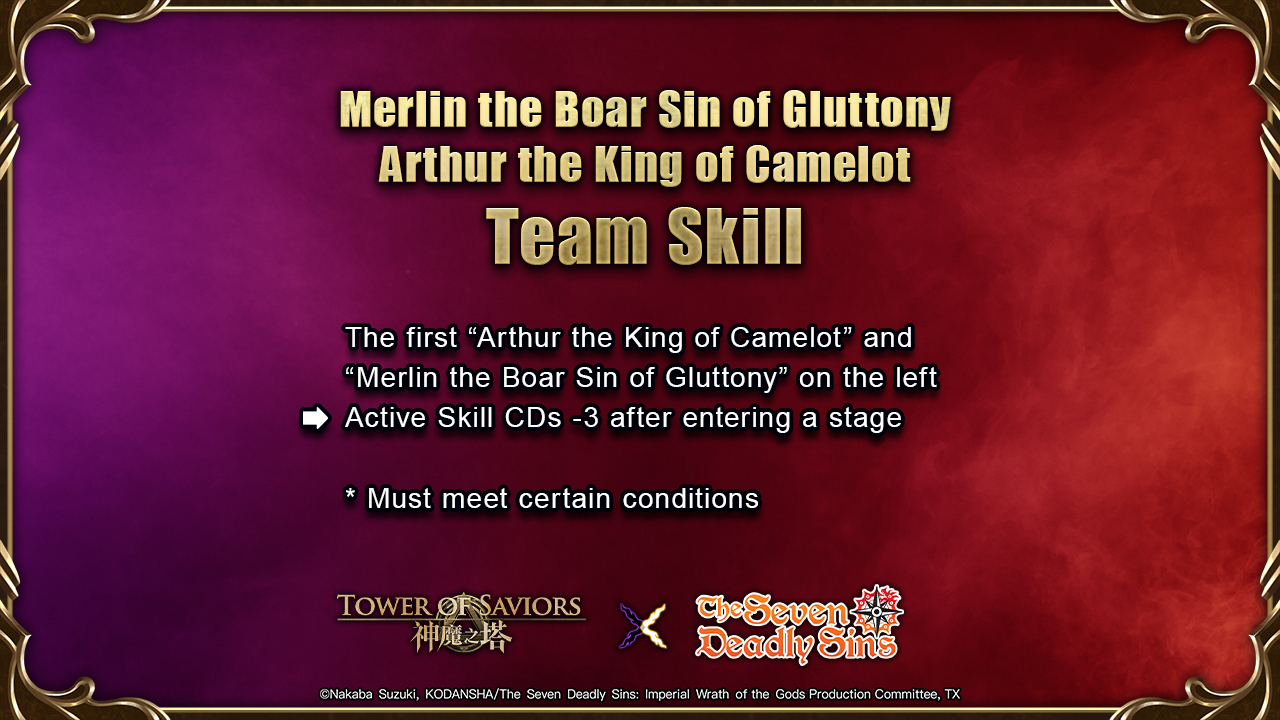 When “Merlin the Boar Sin of Gluttony” is taken to battles together with “Arthur the King of Camelot” and “Escanor”, Active Skills CD of these characters will be reduced; and “Merlin” will follow Escanor to be changed into Light Attribute to fight. 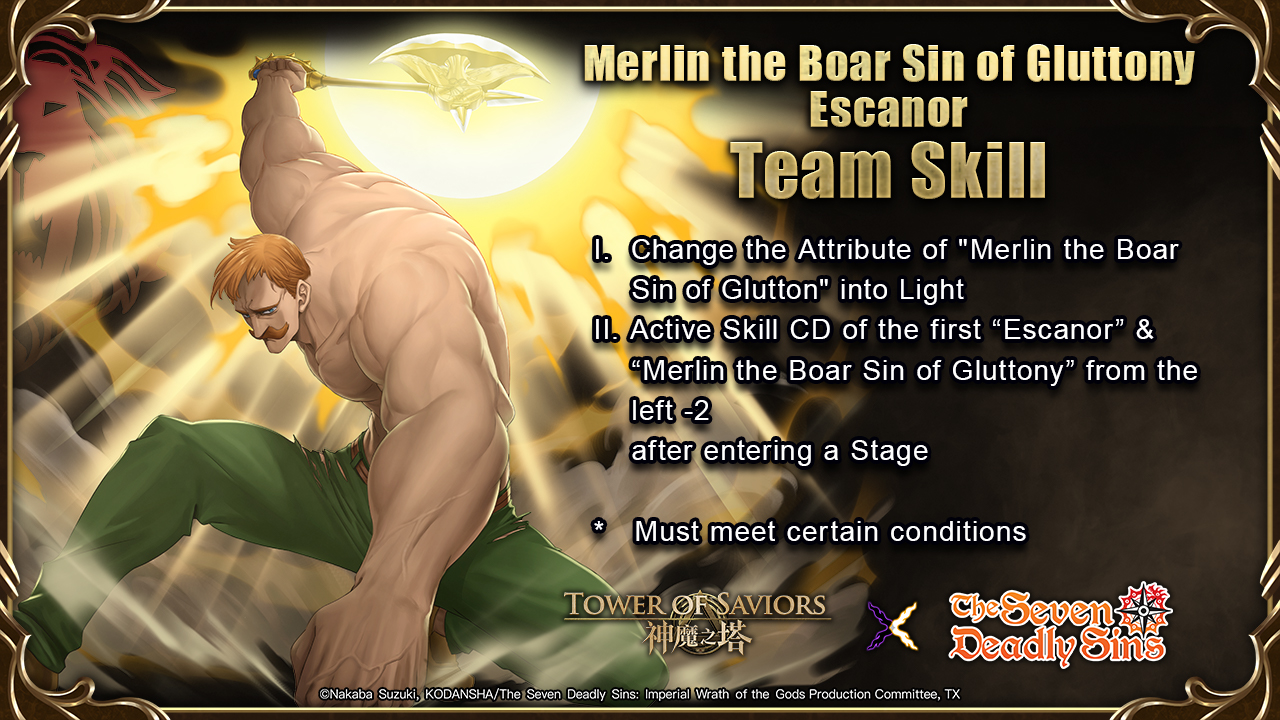 “Arthur the King of Camelot” has the active skill “Deathpecker” to explode all Weakened Runestones; For 1 Round, the character launches 5 extra Light and 5 extra Dark attacks as much as 30% of its Attack and increases Ex. Combo!

Light Human “Elizabeth Liones” can activate “Healing” to fully recover HP; turn the column below the character into Enchanted Heart Runestones; for 1 Round, the Team will not be poisoned. If other Team Members are Characters of “The Seven Deadly Sins”, I – III effects stay in play for 3 Rounds 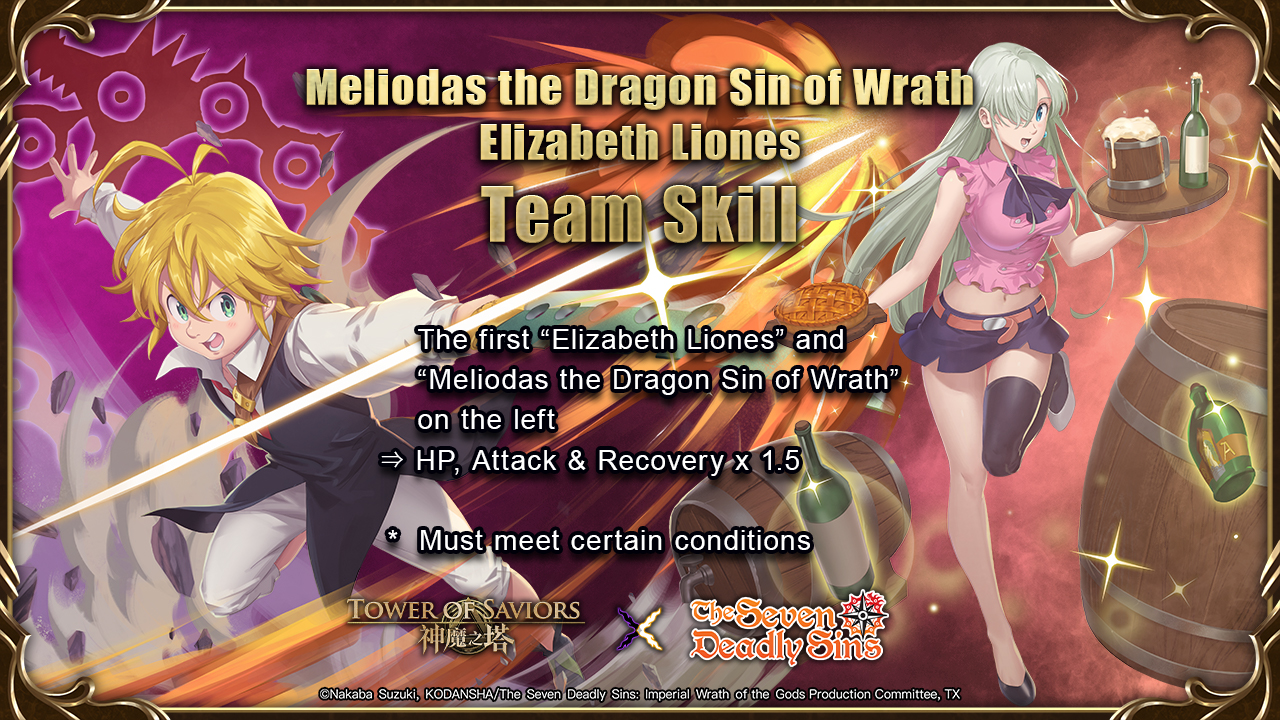 The first “Elizabeth Liones” and “Meliodas the Dragon Sin of Wrath” on the left sides, HP, Attack & Recovery x 1.5

The leading character “Commandment of Patience – Drole” of the bi-weekly series “Traitors of Stigma” will be released in the 1st week of the crossover. Earth Human “Drole” can activate “Gigant Gauntlet” to turn the columns on the far left and far right sides into Enchanted Earth Runestones; and explode the middle 4 columns. 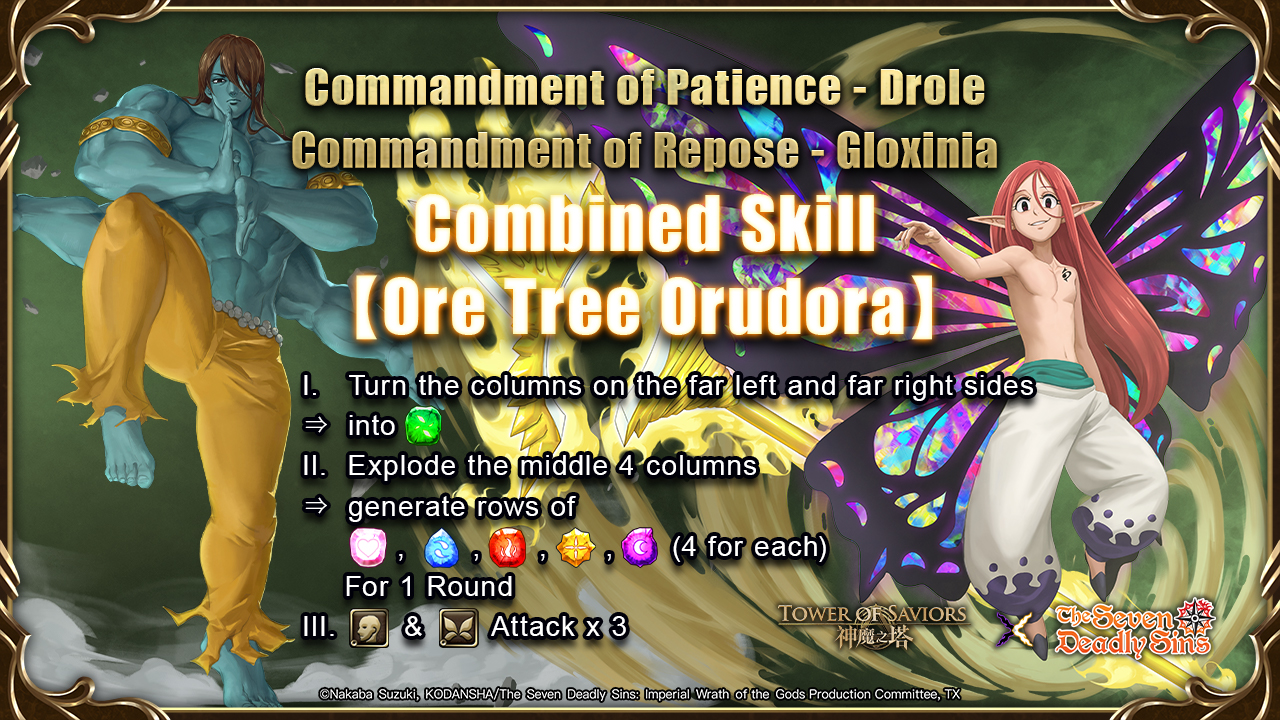 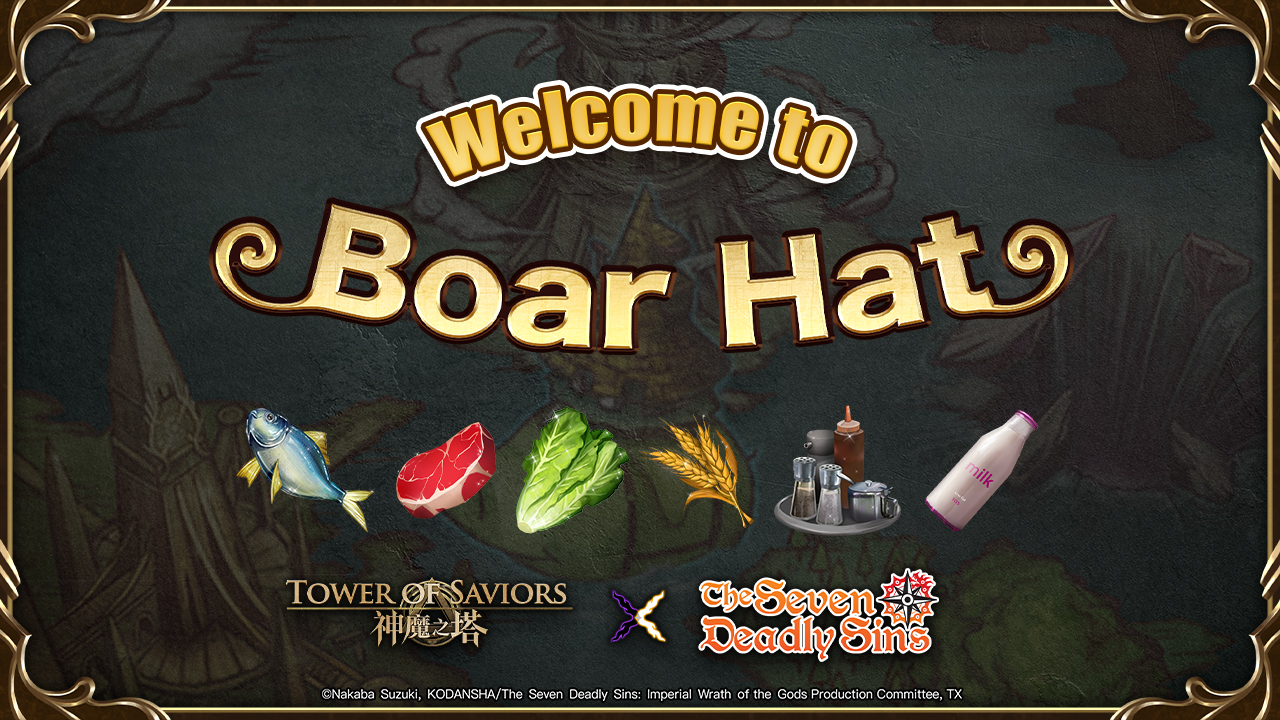 During the crossover period, “Boar Hat” will appear in the realm! “Here Comes the Worst Food” will be provided every day and all runestones will be turned into food and beverage. You’re required to defeat the enemies by fulfilling specific requirements. Summoner can collect the specific exclusive Dragonware of “The Seven Deadly Sins” on different dates.

**All relevant events & rewards of “The Seven Deadly Sins: Imperial Wrath of the Gods” are Hong Kong, Macau, Taiwan, Singapore, Malaysia and Thailand exclusive only.