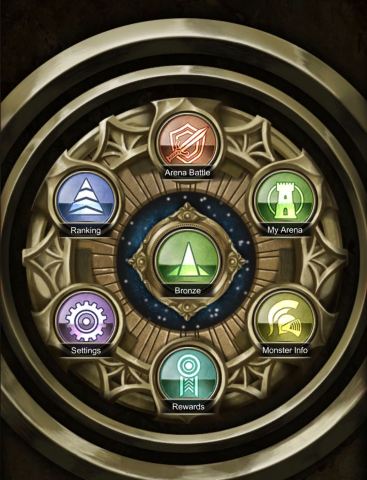 Arena is a place where Summoners compete with each other. With the highest score, you will be the new conqueror of that arena.

Player has 1000 basic Battle Points. You’ll be defeated when Battle Points are used up. And Battle Points will be deducted each time when Active Skills are activated or Your HP = 0.

You have 5 free Vigors everyday for Arena Battle, which can be refilled by using diamond or purchasing refill in Soul Exchange. By completing a battle, you’ll earn Prize Point and higher Arena Ranking.

The Arena is concluded every Monday at 12:00 PM (GMT+8). Summoner can get Rewards corresponding to their Classes and Rankings based on the best 5 scores of the day, including treasures like Diamonds, Prize Points, Harpy and Baby Harpy.

There are different series which give special 5%-10% bonus for being a member of the attack side or defense side. The boosted monsters will be changed bi-weekly. Some weeks may or may not have defensive boosts.

For details of the boosted monsters, Summoner can check in the Monster info in the Arena Hall.

* Some monsters are forbidden in the Arena*

– Each player can conquer at most 3 arenas at the same time, up to 4 at Grade 8

– New Arenas exist for only 12 hours instead of 24 hours

– The Arena health is drained by the amount of points earned, rather than how many times it’s played

– Each Arena has approximately 40,000 HP worth of points to be drained. Arena HP can be increased by Arena trial rewards

– King towers will always have enemies with Lv 99. (Does not include Legend Rank)

– The maximum Arena Level is 10

– Your basic Battle Points starts from 1000 at Arena Level 1. You gain 50 additional Battle Points on top of the previous 1000 for every rank level gained

– The higher the owner’s Arena Level, the higher the HP and ATK of the team and the more skills become active

– With every clearance, you gain Arena EXP to increase your Arena level. You’ll be matched against other players of the same Arena level as much as possible

– Classes include Bronze, Silver, Gold, Platinum, Diamond, Warlord, Legend and King. Only the top 10000 players can go to the Classes of Legend and King

– After each season, all player’s ranks will be reset to Bronze III. Each season lasts around 1 month+

IMPORTANT: Max Damage is only calculated at the boss stage.

– In an Arena Stage, 80 Battle Points will be deducted for Combination or Switching.

– Every Monster can activate its Active Skill once every turn

– Starting from the 5th spinning turn, for every turn used -100 result points.

– Diamond cannot be used to revive.

– Craft cannot be used in Arena.

– When an arena is defeated, Summoner with the highest scores will take over that Arena.

– You can set the Defending Team. (Please be reminded that for every type of abilities, only one monster of the same ability can be chosen as the defensive team)

– Arena Conquerors can set a personal Team for Defense (only one Monster can be selected in one Series).

– By tapping “Monster Info” on the main page of the Arena, you can check the available Defense Monsters and their Defense Skills.

– On your card, there’s a toggle by the Leader Skill heading that lets you see the card’s resulting skill when you put it into battle (if any). For example, PR Artemis has 5-combo shield, and Marguerite has Weather Runes.

– You may switch arena team with a penalty of 6 hours to be unable to reset the team again.

There are different classes, including Bronze, Silver, Gold, Platinum, Diamond, Warlord, Legend and King. Only 10000 top Summoners can become Legend and King of the Arena.

Arena Trial normally opens in the last week of each version. By completing the trial, you may gain EXP and be promoted to higher Grade.

* Note: The trial is a one-off stage

Once you reach 25,000 EXP, your Grade will be levelled up.
Starting from “Sergeant Major”, the requirement for levelling up is 50,000 EXP.